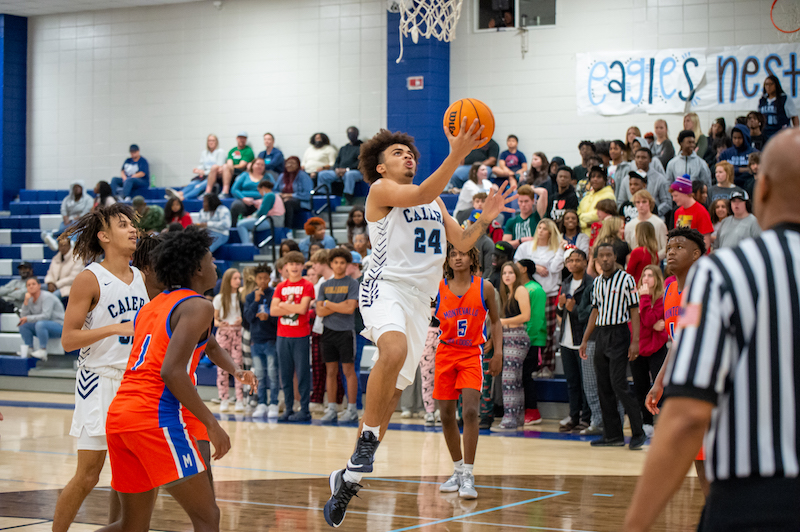 The Calera Eagles went 2-0 at the Talladega basketball tournament during the week after Christmas thanks to wins against Lincoln and B.B. Comer. (File)

TALLADEGA – Due to inclement weather, the Calera Eagles didn’t get to play in the championship game of the Talladega basketball tournament, but they didn’t let that dampen their spirits following a 2-0 record at the event.

Despite playing without leading scorer Xzayvion Childress during the stretch, the Eagles were able to grab victories against Lincoln and B.B. Comer in the opening two rounds of the tournament to improve to 8-8 on the season in the midst of a three-game win streak.

The Eagles’ margin of victory in the two games was an average of 31 points, starting with a 28-point win against Lincoln to kick off the tournament.

Without Childress, Izaiah Holmes filled a big void in the scoring column with 16 points in the victory, while Holmes also contributed two rebounds and two assists.

In addition to him, Brandon Caldwell and Damien Wooley were both all over the floor for the Eagles.

That balanced effort carried into an even more impressive effort against B.B. Comer in the semifinals.

Thanks in large part to Gavin Blankenship catching fire from the field, Calera picked up a 69-35 victory to even its record at 8-8 on the season.

Blankenship totaled 23 points in the victory. The sophomore, who has been shooting well from the field, finished 5-8 from beyond the arc to play a major role in the outcome.

Beyond him, Caldwell and Wooley each played well for the second day in a row. Caldwell finished with six points, eight rebounds, four assists and three steals, while Wooley totaled six points, nine rebounds and five assists.

The championship game a day later was canceled due to inclement weather, as a tornado ended up touching down just south of Calera later that night.

Now on a three-game winning streak, Calera has bounced back from a 0-4 deficit early in the season.