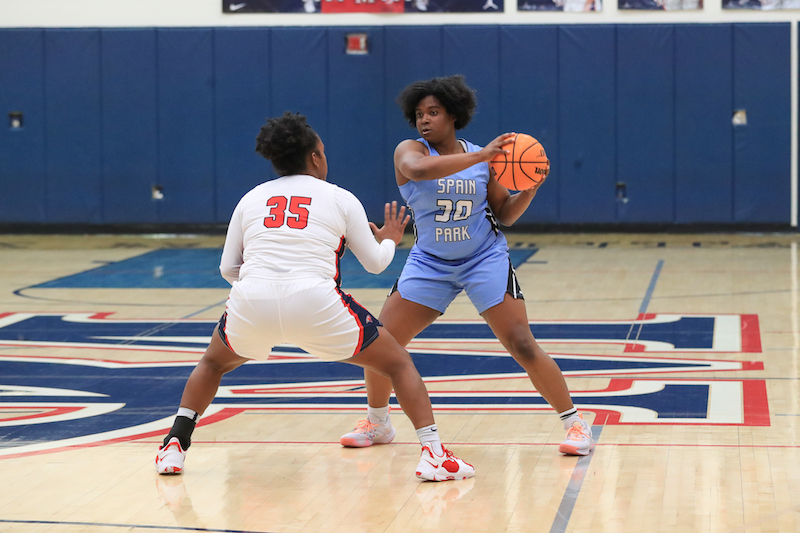 The Spain Park girls basketball team enters the second half of the season off a 2-1 record at the Marlin Classic in Florida the week after Christmas. (File)

Taking on teams from Georgia, Tennessee and Florida in the Marlin Classic, the Jaguars were able to put together a 2-1 record at the tournament to gain confidence heading into area play to open 2022.

In the opening game, Spain Park notched a 47-41 victory against Brookwood thanks to an impressive start to the game.

Kerri Barnes was a big reason why in the first few minutes, as she hit back-to-back 3-pointers to get the game off and rolling for the Jaguars.

That was one of three consecutive 3-pointers for the Jags to open the game, as Paxton Gillispie made it 9-2 shortly after.

It helped Spain Park take a 13-8 advantage at the end of the opening quarter, which grew on the first made shot of the second quarter after Barnes hit her third 3-pointer of the game.

Gillispie then added her second 3-pointer of the matchup to make it 19-8. The Jags used that momentum to outscore Brookwood 16-11 in the second quarter and take a 29-19 lead into the half.

Out of the break, Spain Park was able to start the third quarter on a 5-0 run to help create some separation.

From there, Brookwood was forced into an uphill battle that became too steep.

Spain Park had nine steals and outrebounded Brookwood by 17 in the win.

In the second game against Oakland, the Jags fought to an early 4-4 tie, but Oakland responded with lethal run of 20-1 from there to take a 24-5 advantage in the second quarter.

That became too much for Spain Park to overcome, as Oakland held the Jags to single digits into the third quarter with a 30-7 advantage before Gillispie hit a 3-pointer.

The Jaguars went on to score 21 more points from there, but Oakland finished the game out with 22 more to complete a 52-31 victory.

Spain Park, however, had a short memory.

Closing out the tournament a day later, the Jags used an impressive start and a dominant finish to polish off the event with a 55-40 victory against Port St. Joe.

They jumped out to a 7-3 lead early in the first quarter behind strong defense, which eventually led to an 11-8 advantage at the end of the opening quarter.

Then, in the second quarter, the Jaguars caught fire from beyond the arc early in the period thanks to 3-pointers from Gillispie and Charlee Bennett.

Port St. Joe, however, gained confidence near the end of the second quarter, which spilled into the second half.

The Tiger Sharks ended the second quarter on a 7-2 run and added four in a row to start the third quarter, trimming the Spain Park lead to four points.

The Jags, however, responded with back-to-back 3-pointers from Bennett shortly after to take a 36-26 lead.

Port St. Joe did outscore Spain Park 14-10 in the quarter to draw to within four points heading to the final quarter.

But the Jaguars finished on a furious in the final period, outscoring the Tiger Sharks 15-4 to create the separation needed for a 15-point victory.