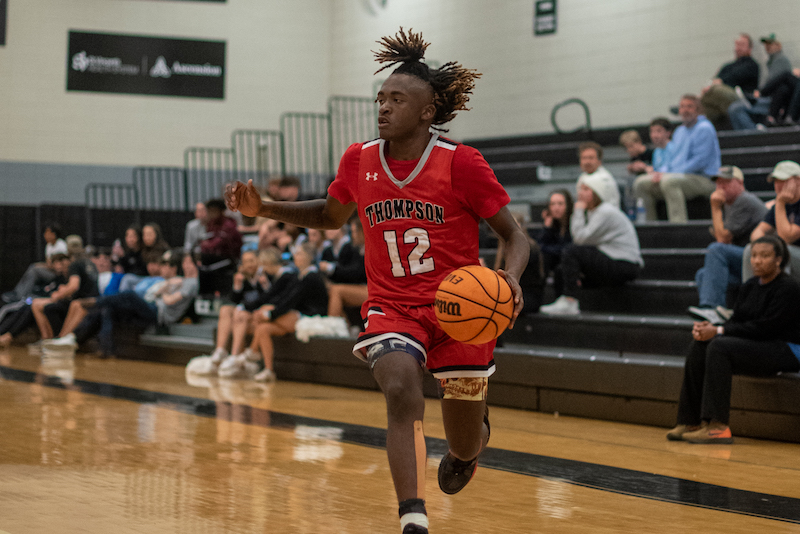 ONEONTA – It has been an up and down run for the Thompson Warriors through the first half of the season, but amid one of their most difficult stretches of non-area play, they have started showing possibilities.

Following a 2-1 record at the Smoky Mountain Classic the week before Christmas, Thompson returned to the court at Oneonta’s tournament the week after before shifting into the new year.

The Warriors did drop their second game in a row to start the tournament, but did so against Bradley Central (Tennessee) in a tight 50-49 game.

Thompson then followed that by bouncing back from the close loss with a clutch 52-50 win against Decatur to close out the tournament a day later.

In the opening game against Bradley, the Warriors actually got off to a strong 14-5 start following 3-pointers from Justin McKnight and Carson Pringle.

But from there, it was slow going for the Thompson offense.

Neither team shot particularly well from the field in the later part of the first quarter or the majority of the second quarter, which allowed the Warriors to maintain a lead at 20-19 late in the half.

The Bears, however, had flipped the momentum into their favor and capitalized going into the second half.

They used an 11-4 run to storm in front for a 30-24 lead before Thompson’s Jose Gonzalez knocked down a crucial 3-pointer with 5:30 to play in the period.

But Bradley continued the torrid pace, eventually taking a 42-31 lead late in the third quarter.

A quick 5-0 run from Pringle helped the Warriors stay intact behind a fast break and 3-pointer.

He helped them battle back to within six points at 46-40, and then hit another fast-break layup to make it 46-42.

Thompson trailed by six for much of the third and fourth quarter, but continued defensive pressure kept the Warriors within striking distance when Landen Lawrence knocked down a 3-pointer to make it 50-47.

Another fast break and layup from Gonzalez then cut it to one point, but that last point was the hump Thompson couldn’t get over in the 50-49 loss.

Thompson shot 25 percent from beyond the arc and 39 percent from the floor. Bradley shot 8 percent better in both categories, which offset Thompson winning the rebound and steals battle.

The Warriors, however, bounced back against Decatur a day later to finish off the tournament.

In what was a tight battle for the majority of the first half, Thompson was able to open up a run late in the second quarter and going into the third quarter that made the difference.

Down by one point in the second quarter, the Warriors put together a 12-0 run to take a 26-15 advantage early in the third quarter.

Decatur battled back to within seven points shortly after behind a 9-5 run, but Thompson was able to answer the call going into the final quarter, eventually taking a 37-28 advantage.

A Stephen Mayfield 3-pointer, however, cut the deficit to six points for Decatur.

That kick started an impressive stretch for the Red Raiders, who erased the deficit, eventually tying the game to force overtime.

In the extra period, the back-and-forth battle continued, eventually leading to a 48-48 with 1:30 to play.

Decatur broke that tie, taking a 50-48 lead, but the Warriors finished with four consecutive points from there to pick up the clutch two-point win.