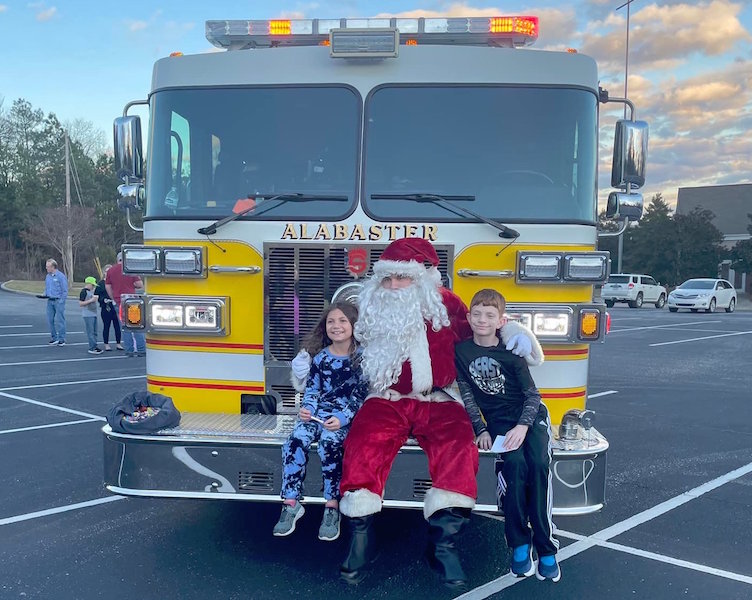 Santa stops returned to the city of Alabaster during the 2021 holiday season, as the Alabaster Fire Department took Santa Claus around to visit several centralized areas to visit the city’s children. (Contributed)

ALABASTER – The Santa Claus stops throughout the city of Alabaster on Christmas Eve saw a successful return during 2021 following a year off due to COVID-19.

Organizers of the event said this year’s tour went well, and everything was wrapped up by 7 p.m. after beginning the day’s festivities around 1 p.m.

The Alabaster Fire Department took a brief hiatus escorting Santa Claus throughout the city in 2020, but the tour returned in 2021, adding new neighborhoods and more centralized stops to accommodate the growth the city continues to experience each year.

The new route was designed to allow Santa more time to spend with children at each stop, rather than quickly passing by. In addition to the extra time, the tour’s schedule allowed for it to wrap up in enough time for children to get to bed before Santa began his “official” tour around the world.

“As we look at next year, we may adjust locations and time frames with increased advertising,” Love said. “We brought in extra personnel during the routes and placed two additional units in service. We only got behind due to call volume on one route, but I feel we accomplished our mission and will be looking for ways to improve.”

The Alabaster tour features Santa riding atop a city firetruck, where Santa stops and visits with children throughout the city.

The tradition helps provide a memorable experience for those living in Alabaster, and encourages families to come out and enjoy something before Christmas.