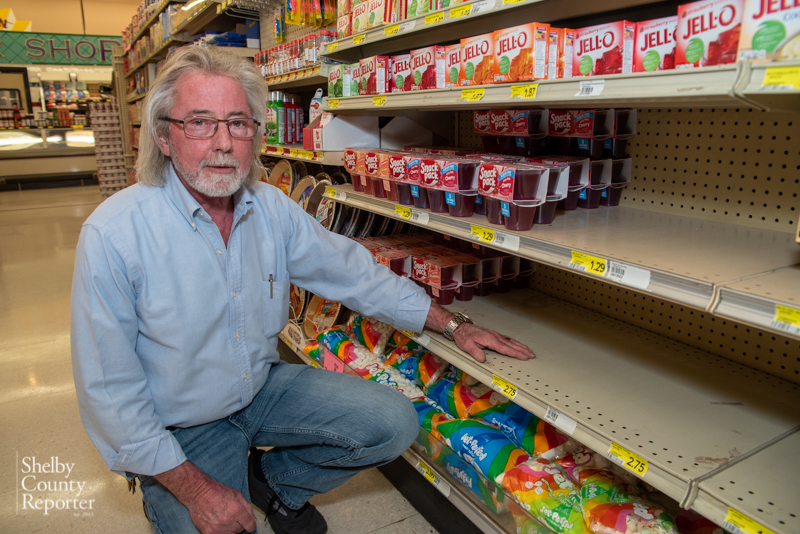 Gary Bradford, owner of the Columbiana Piggly Wiggly, is one of many local business owners experience supply chain shortages in the grocery-store/restaurant industry. (Reporter photo/Keith McCoy)

ALABASTER — It’s no secret that disruptions in the supply chain, from international ports to manufacturers all the way down to the local level, are creating unprecedented logistical challenges for businesses on a daily basis. This is especially true for the food industry, affecting not only food products themselves but also the containers, utensils and even the equipment used to prepare it.

Several local business owners in the food industry shared their perspective on supply chain issues and what they are doing to mitigate shortages and other problems they are experiencing.

Naseem Ajlouny, owner-operator of Full Moon Bar-B-Que in Alabaster and Pelham, said he is spending more time than ever sourcing and distributing product to his stores.

“It’s constant. I spend probably 30 percent of my work now trying to source product,” he said.

Like other business owners, Ajlouny is seeing more issues with supplies than with food itself—cups, lids, forks, knives, aluminum pans and straws among them. He is currently having to buy them by the pallet just to ensure his restaurants can get through the holiday season without a significant disruption.

“If I don’t have pans, I can’t send out catering, and during the holiday season catering is big for us,” Ajlouny explained.

There are some food-related issues, such as the availability of corn on the cob and the increased cost of protein items, that are forcing menu changes until things improve.

“Proteins have gone through the roof. Some prices have become so outrageous that we can’t justify keeping them on menu (until prices go back down),” Ajlouny said.

Ajlouny said there are issues with both manufacturing and on the logistical side as well, specifically with getting product delivered. When it does come in stock, it disappears fast. The issues are affecting equipment too—Ajlouny said he had to order new ovens for the Alabaster Full Moon location in June but did not receive them until November. As a result, whenever a piece of equipment goes out he purchases two of them and puts one in storage rather than risk having to wait.

He said he does not expect any real changes until at least the early summer of 2022—at best.

“Everything seems to be imported. Everybody’s just having problems getting their hands on it,” he said.

On the grocery side of things, Gary Bradford, store manager of Piggly Wiggly in Columbiana, said certain holiday items have been hard to come by—mashed potatoes, soups and water chestnuts among them. But he has mitigated that by ordering items in bulk whenever he knows ahead of time when there might be a shortage.

Networking between district managers and store managers has helped Piggly Wiggly stay ahead of some issues. As a result, they are getting customers from other stores.

“We boarded early,” Bradford said. “We don’t have the issues that some other stores are having. Anytime we know ahead of time when they’re going to run short, we order three months’ supply.”

But there are items that have proven elusive. Chitterlings, for example, is a big holiday item but nobody in the area seems to have them.

“We can’t get them,” Bradford said in November, adding that juice boxes such as Capri Sun and Hawaiian Punch have also been in short supply. As a result, from time to time the store has had to switch to off-brands on a temporary basis.

“We’re getting those back in now. It’s amazing how much of that product we sell,” Bradford said.

In addition, soda companies are not producing all of their flavors, Bradford said, so people who are used to drinking a specific flavor might not be able to get it. He also indicated that name-brand paper products have been a challenge to keep in stock.

Bradford traces some of the issues to a shortage of truck drivers and available trucks to deliver product to warehouses on time. This causes deliveries to run late, sometimes by as much as a day. He is also struggling to keep a complete staff at the local store, although applications are starting to come in.

“I’ve never seen this happen before. I’ve never struggled to have enough staff,” he said.

Until things get better, Bradford is asking customers to be patient and understand that there are labor issues, and that price increases are caused by many factors that local stores do not control.

Meanwhile, William Cholewinski, owner of Chubbfathers in Alabaster, has had problems getting paper products such as to-go boxes, plates, cups and foil packs.

“We’ve definitely had our fair share of issues. I’ve been very pleasantly surprised. None of our shortage issues have really had to do with food,” Cholewinski said. “That’s what we’ve seen the most amount of aggravation from on our end.”

He did say prices for chicken wings and other meats have gone up, such as ground beef, for which he is paying $1.50-per-pound more compared to this time in 2020.

And, fortunately for Chubbfathers, the demand is not going away. That obviously means good business but also continued challenges for as long as the shortages last.

On the upside, Cholewinski said he is seeing more willingness to help from one company to another.

“You’ve got major food distributors whose reps are working to try to fill the needs of customers who are customers of other people, but they’re all doing it to make sure at the end of the day the customers get what they need. That’s been really nice to watch,” he said.

Moving forward, Cholewinski sees every challenge as an opportunity to learn.

“We are staying extremely busy,” he said, praising both his team and customers. “We just roll with the punches. Where a lot of people see problems, I see it as an opportunity to learn and add to my bag of tricks.”