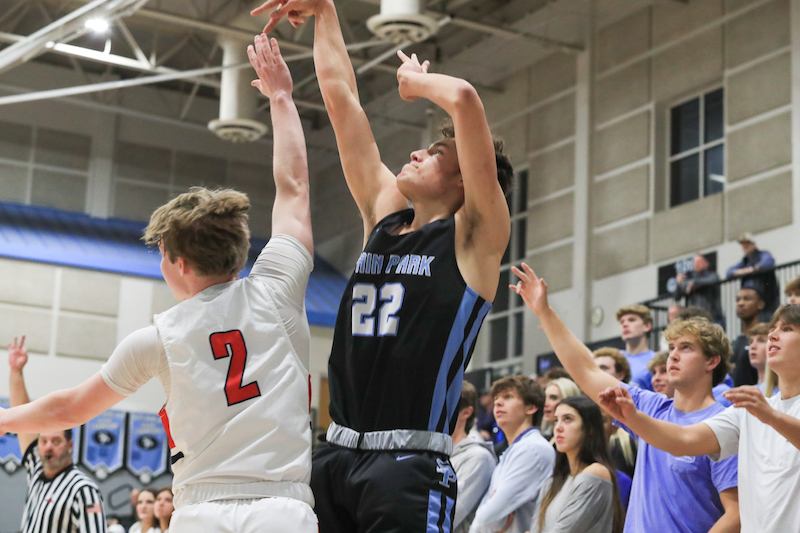 The Spain Park basketball team picked up a thrilling 67-65 victory against McAdory on Tuesday, Jan. 4. (File)

MCCALLA – It came down to the final shot, but the Spain Park Jaguars were able to fend off McAdory in a scrappy game on Tuesday, Jan. 4 to pick up their 16th win of the season.

After Josh Harrington made one of two from the free throw line to put the Jags in front 67-65, McAdory ended up with one last look in the final two seconds.

Inbounding under their own basket, the Yellow Jackets got the ball into the post and tossed up a hook shot, but hit off the backboard, but missed the rim, giving the Jags a two-point victory.

It closed out a thrilling game that was within single digits the entire way, starting with a back-and-forth opening quarter.

The Jags, however, were able to handle the pressure throughout the matchup, including the opening quarter. That led to a slight 14-13 lead going to the second quarter.

The Jackets, however, fought blow-for-blow with Spain Park throughout, which led to a compelling second quarter.

They came right back with an 18-17 quarter to even the game at 31-31 going into the halftime break.

That tight battle continued into the second half, but McAdory built off of its strong second quarter by gaining a three-point lead at 41-38 midway through the final period.

Colin Turner, however, had a big answer with an and-1 that tied the game shortly after.

That was part of an important end to the third quarter for the Jags, who took the lead back at 43-42 before hitting back-to-back 3-pointers from Korbin Long and Josh Harrington.

With the strong finish in the final two minutes, Spain Park had earned a 49-46 lead and took an 11-5 run into the final quarter.

The Jaguars used that to their advantage, eventually taking a six-point lead with 3:34 to play.

A missed free throw, however, became costly and prevented the Jackets from tying the game at that point.

From there, Harrington hit one of two before the Jags’ defense prevented the game-tying look.

Turner and Zach Gray both continued impressive seasons with 20-plus nights to lead the way for Spain Park. Turner finished with 23, while Gray added 21 to help the Jags improve to 16-4.