Chelsea to hold public hearings about future of schools 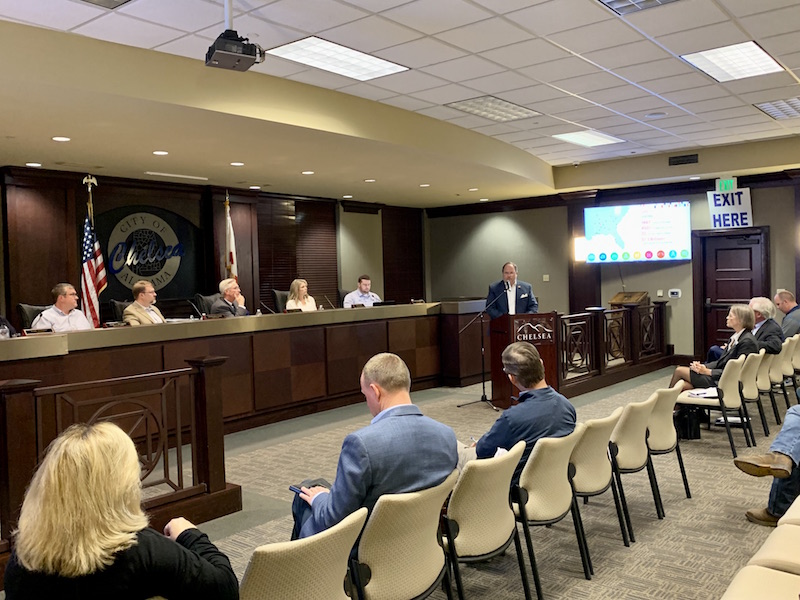 Since hearing the results of a feasibility study and facilities assessment in November 2021, Chelsea City Council members have invited citizens to share feedback in the ongoing discussion about the future of the city’s schools. (File)

CHELSEA – The Chelsea City Council held a lengthy discussion on Tuesday, Jan. 4 about the future of the city’s schools and finances related to facility improvements and the potential formation of an independent school system.

Mayor Tony Picklesimer and City Council members shared their individual thoughts on property tax numbers Criterion K-12 Consulting included in a feasibility study, which the city authorized in 2021 to determine what the financial impact would be if Chelsea were to form its own school system, along with the estimated costs of upgrading existing facilities and building a new high school.

“There have been lots of discussions about that study and its findings,” Picklesimer said. “The numbers that they gave us in that study were that we could start an independent school system here in Chelsea with four schools – Forest Oaks (Elementary), Chelsea Park Elementary, Chelsea Middle and Chelsea High School – with 11 mills of property tax. That would be what it would take for us to begin our own school system and break away from Shelby County.”

Picklesimer said the second option in the study involves 22 mills of property tax, which would generate roughly $40 million and enable the city to form a school system and renovate the existing four facilities, followed by the third option involving 32 mills of property tax, which would generate nearly $80 million to build a new high school and do other renovation projects at the city’s other three schools.

Chelsea residents currently pay a 44-mill property tax, but none of it goes to the city.

Several weeks ago, the city launched an online survey to gauge citizens’ interest in the formation of a Chelsea city school system.

The survey consists of the following six questions:

Since the survey opened in December, Picklesimer said only about 970 of the city’s 11,500 voters have participated.

“The good news is it’s not too late,” he said. “The survey does not have an end date as of yet, and we are going to make a fresh push to have our constituents fill out the survey and let us know what their wishes are.”

The survey can be accessed on the city’s website, Cityofchelsea.com, and the City of Chelsea, Alabama Facebook page.

Picklesimer said he is still in favor of Chelsea breaking away from Shelby County Schools, forming its own school system and building a new high school.

“This is not my decision,” he said. “It’s the decision of the citizens of Chelsea. With the small percentage of people that have taken the time to fill out the survey, as of right now, the survey is saying that the majority of you would like to see us form our own school system, and that a double-digit majority of you would be OK with it being $600 a month in property tax.”

Councilmember Cody Sumners said he has been against the city forming its own school system for financial reasons, not a lack of interest in improving the schools.

“We definitely need to make changes,” Sumners said. “I just feel like right now, we aren’t in a position financially as a city to take on such an expense. I don’t see burdening the city with that type of debt right now, especially when none of that is going to come back to the city to fund programs that we’ll need.

“If we max out our property tax at one of the highest in the state, I would have a problem with coming back to the citizens in the future and asking them for more money to just fund our basic services we’re supposed to provide.”

Councilmember Scott Weygand agreed with Sumners that something needs to be done to address significant facility issues at the middle and high schools.

Councilmember Chris Grace emphasized the issue is not about academics, but about the state of the facilities and improvements that have been needed for many years.

“For us to take no action is irresponsible,” Grace said. “We all are in this because somebody that we care about is engaged in the school system. There’s a sense of disappointment that we haven’t heard more from our constituents about this issue.”

Grace said he has concerns about a 30-mill property tax increase.

“I wouldn’t vote for that as a citizen,” he said. “My mind is not made up completely as a representative of this council about where we need to move forward, other than to say taking no action is not an option. The quality of our schools is a direct mark of the quality of life in our community.”

Councilmember Tiffany Bittner said she feels letting the citizens vote is the fair way to determine the city’s next steps.

“If people vote no, then that’s no, but I feel like we should give them an option to at least vote and decide if they’re willing to pay,” Bittner said. “Our school facilities are inadequate, and they’re downright embarrassing. I feel like no action is going to lead to residents leaving, moving their students somewhere else because of the inadequate facilities, and especially now more than ever that we’re moving to a 7A school system.”

Bittner said changes should have been in the works years ago.

“We have an opportunity to try to make a change for the better,” she said. “I feel like now is the time to do something.”

“I, from the get-go, was very excited about the opportunity,” he said. “I would love for us to have our own city school system, but I’m also very wary of what that would cost and the impacts of that cost on the other amenities around Chelsea.”

Regarding facilities, Morris said he thinks the city needs to investigate its options further instead of immediately breaking away from the county school system.

“I think there needs to be more conversations with the Board of Education leaders and county leaders as to how we could do this,” he said. “It does not make sense to extend ourselves so far in debt services that we cannot allocate money anywhere else.”

The first public hearing will be held on Thursday, Jan. 20 at 6 p.m. at Liberty Baptist Church in Chelsea.