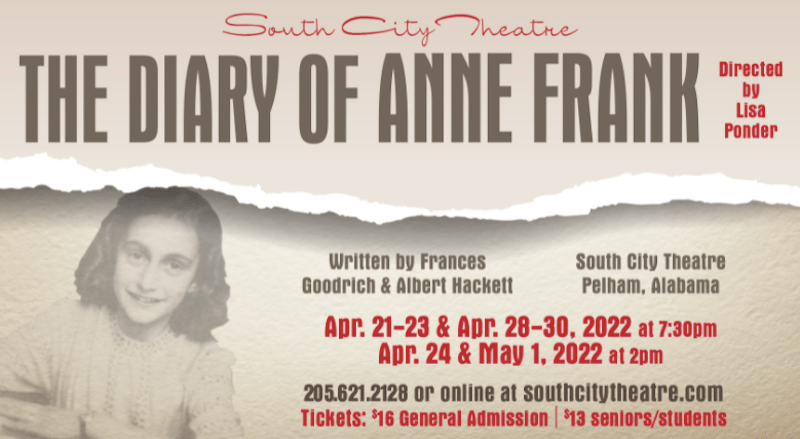 Pelham’s South City Theatre is hosting auditions for their upcoming production of “The Diary of Anne Frank.” The auditions are via ZOOM and will be Saturday, Jan. 8 and Sunday, Jan. 9. (Contributed)

PELHAM – On Saturday, Jan. 8 and Sunday, Jan. 9, South City Theater will be hosting virtual auditions for their upcoming production of “The Diary of Anne Frank”.

The play, which is a dramatic adaptation of the book of the same name, tells the story of Jewish teenager Anne Frank as she and her family hide in an attic to avoid being captured by Nazis during World War II.

The play has been on South City Director Lisa Ponder’s mind for two years now, as it was originally supposed to be part of the theater’s 2020 season. Then COVID-19 hit.

“Anne Frank was the next show slated to go up, and every show from mid-March on was postponed,” Ponder said.

The next several months brought uncertainty for the world, South City included, but the theater company never lost hope. Ponder said they got “creative,” doing scenes from “A Midsummer Night’s Dream” and livestreamed skits from other venues.

“We’re trying our best to find that balance where we can make it comfortable for the most people,” Ponder said. “It’s a challenge but it’s a good thing.”

Through everything, the idea of bringing the production of Anne Frank to the stage never left Ponder.

“This is a show I have wanted to do for a very, very long time because of the memories I had as a child being exposed to this show,” she said. “This show touched me, and I really wanted to bring it together. The themes are deep, the true history is horrific, even though there’s so much hope throughout the show, the end is the end and there’s nothing that will change that, but I want to focus on the hope and the love this family felt for each other.”

During the pandemic, everyone around the world was struck with fear and uncertainty as COVID-19 plagued millions of people. Millions of people went from living their normal day-to-day lives to the world being shut down. It started with two weeks, then turned into much longer. Now, it’s 2022, and Ponder feels like the show’s importance can resonate even more with an audience and with its cast.

“There’s an acting exercise called ‘an as if,’ and it’s where you come across something you have not experienced yourself, you reach within yourself to find a similar experience,” Ponder said.  “It’s not going to be the same or as intense and the risk may not be as high, but it’s something you can personally relate to. There’s no way what we went through compares to what they went through, though. We aren’t going to understand what it’s like to hide in an attic where the slightest noise could mean your death, but we are going to understand what it’s like to be confined to one space and hide from this illness that we have no control over.”

Ponder emphasized, though, that she wants people to take away the love and hope between Anne Frank and her family that resonates throughout the play up until its tragic ending.

“Even before all this happened back in 2020, the focus I wanted to bring forth was the joy they find in their everyday living,” she said. “The hope that they’re going to get out of there and make it through this even down to the end. If we as actors and directors focus on the tragedy of the end, we lose that message of hope, and we need hope. It’s the hope that keeps you alive.”

The production is looking for five men and five women and will feature cold readings from the script. Auditions are from 2-4 p.m. both Saturday and Sunday. Registration for the auditions is available at https://calendly.com/lisa-ponder/15min?month=2022-01&fbclid=IwAR07vnA3NqjEba_TANIsK248QYuFpaPo_wFjjRJzbnY7jqkIoLm1I_iw5Vg. The show is slated to be April 21-23 and April 28-30 at 7:30 PM and April 24 and May 1 at 2 PM.