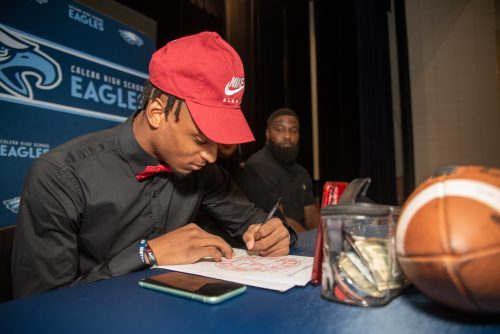 Every year, it is the same story.

Athletes get their opportunities to sign on the dotted line to continue pursuing a dream many of them have had since they first picked up a ball, bat, club or whatever sporting equipment they first touched.

This year, however, felt a little different.

Usually, the early signing day, which takes place within the first two weeks of December each year, isn’t as hectic around Shelby County.

This year, however, there was much more chaos surrounding the day in the best way possible.

Not only did we see baseball, football and softball players all sign with universities, but many signed with some of the top athletic programs in the country.

More importantly, all of them get the opportunity to continue striving toward their dream of playing each of their sport at the highest level, while also pursuing a college degree—something that still remains a huge benefit to most who make it to the next level.

When you break down the numbers and realize only 7 percent of high school athletes go on to play college sports, it becomes instantly clear what a remarkable accomplishment it is.

From the time most of them were in the early stages of elementary school, they have dedicated their lives to being the best they could.

Whether it be giving up moments with friends to practice in their spare time, training in brutal weather conditions, studying film or battling back from an injury; they have poured everything they have into something they love.

So to see it payoff is a surreal moment.

Burnout is a real part of life. It is so easy to consume yourself with anything you do and let it overtake you until you can’t handle it anymore.

From a very young age, most of these student athletes have had to balance school and sports, and there hasn’t been time for much more.

It takes a level of maturity that is well beyond their years to handle that, because it can mentally wear you down.

I think back to my childhood and how I loved sports from a very young age, playing baseball, basketball and golf.

I eventually gave up the first of those two to focus on my true love of golf, but I never did take it seriously enough.

My parents told me I could go as far as I wanted to and Hank Johnson, one of the most legendary coaches in this state and country, who recently passed away, said the same.

But I didn’t have that same drive to take it as far as they thought I could. Despite loving the game and playing every day of the summer, I didn’t want to put the time and effort into being the best I could.

It is one of my biggest regrets in life, and it is something that drives me to work hard at everything I do now because I’ve seen that regret.

I use that story as an example to show just what these student athletes have done.

They did put in the work and they did maneuver their way through those mental obstacles.

Many of them, I have been watching for two-plus years leading their teams, which gives you a true glimpse into what they are capable of and how hard they work.

That makes it an emotional time. It marks another phase of life as you watch them complete one goal and move on to their next chapter in life.

And on Dec. 15, that’s exactly what they did. They turned the page to start a new chapter where blank pages are left to be filled in on where they go from here.