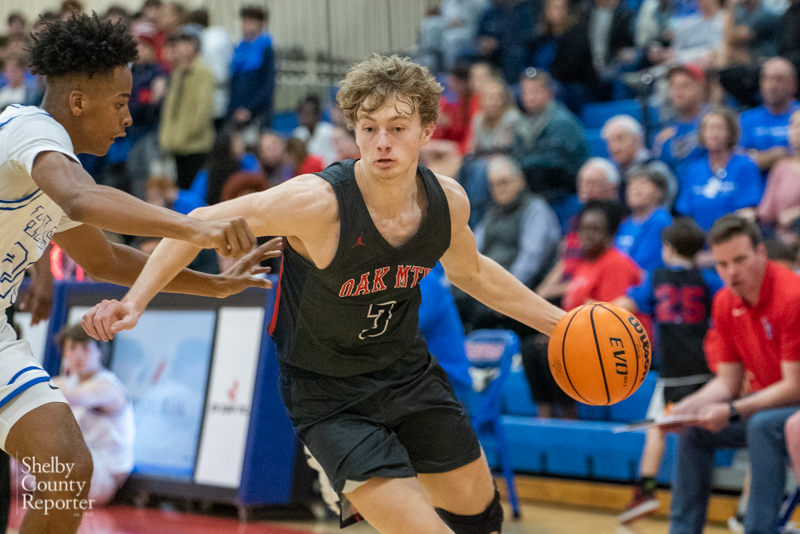 Brady Dunn scored 13 points in the final quarter to help propel Oak Mountain to a two-point win against Tuscaloosa County in the Eagles’ area opener. (File)

TUSCALOOSA – Trailing by eight points at the end of three quarters, the defending Class 7A champ Oak Mountain Eagles didn’t panic in their opener to area play on Friday, Jan. 7.

On the road and without one of their starting guards, the Eagles began their trek back into the game thanks to a sharp-shooting from senior Brady Dunn.

With no points to that point in the game, Dunn caught fire from the field and made three consecutive 3-pointers to spark a 13-4 run, including a 9-0 run by himself, to give Oak Mountain a 45-44 lead.

Midway through the final quarter, the Eagles had taken the lead, but it wasn’t the first time they were faced with adversity late.

During a back-and-forth stretch, Tuscaloosa regained the lead on several occasions in the final four minutes of the game, but Oak Mountain had an answer each time.

The final blow came from Dunn, who capped off a 13-point quarter with an and-1 for a 53-52 lead with just less than a minute to play.

Oak Mountain added one more late free throw, while the Wildcats got the final look but couldn’t capitalize in the final four seconds, as the Eagles picked up a 54-52 victory to start area play 1-0.

It closed out an uphill battle for the Eagles from the start.

Early, the Wildcats grabbed a 7-4 lead out of the gate, but Oak Mountain clawed back to even the game at 12-12 going to the second quarter.

The Eagles scored 12 more in the second quarter, but Tuscaloosa County started showing more promise on the offensive end, which led to a 17-point quarter and 29-24 lead at the half.

Oak Mountain, however, was able to put together spurts throughout the game to remain intact.

Trailing 31-36 early in the third quarter, the Eagles bounced back with a 6-2 stretch to get within one point late in the frame.

But the Wildcats answered the bell for the first three quarters, as Oak Mountain couldn’t maintain consistency.

The Wildcats ended the third quarter on a 7-0 run to take a 40-32 lead into the final quarter.

That, however, is when Dunn gave Oak Mountain its most consistent stretch, helping lead the Eagles to a 24-point fourth quarter and the comeback area win.

In addition to Dunn’s 13, Matthew Heiberger finished as the leading scorer with 16 points thanks to a strong night in the post. Wilder Evers also finished in double figures with 10 points for the Eagles in the win.