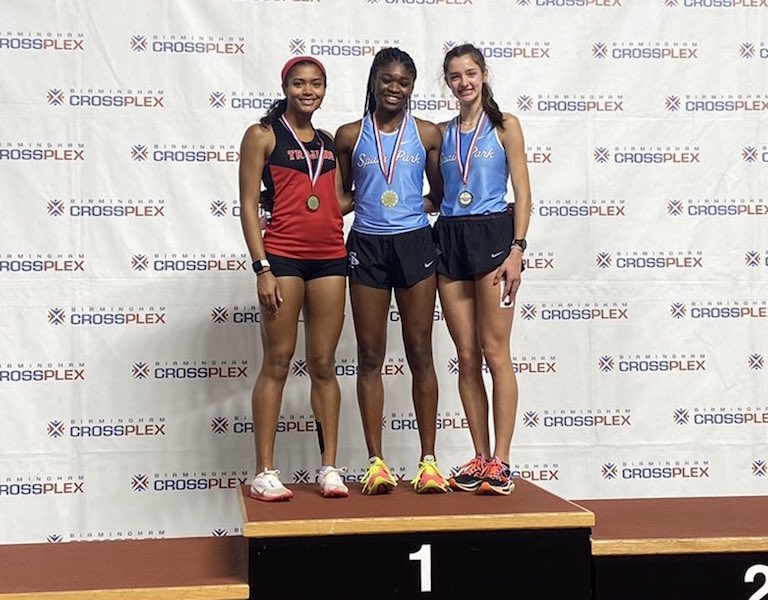 BIRMINGHAM – The indoor track and field season continued to roll along on Saturday, Jan. 8, as eight local track and field teams competed at the Ice Breaker Invitational #2, each with noteworthy performances.

None, however, was more noteworthy than the Spain Park Jaguars, who put together five top-five finishes and seven top-10 finishes.

Four of those high finishes came from two runners, as MacKenzie Culpepper and Delaney Vickers put together impressive showings in the 800-meter run and 1,600-meter run.

Culpepper had one of the best days of any athlete in attendance after finishing first in the 800-meter run with a time of 2:14.75. With that, she was the only local athlete to win at the event.

The boys provided one podium finish for the Jaguars thanks to John Landers finishing third in the pole vault. He cleared a height of 14 feet, while teammate Connor Blair finished eighth after clearing 11 feet, 6 inches.

Cady McPhail of Chelsea was also on the heels of Culpepper in the 800-meter run.

McPhail finished the event with a time of 2:16.08, just missing out on first to Culpepper by less than two seconds.

Chelsea also got an impressive individual finish from Alana McCulla in the pole vault. She finished third after clearing a height of 9 feet, 6 inches.

The boys ended up getting a top-10 finish from Andrew Fielding in the 800-meter run as well. Fielding finished with a time of 2:03.70.

The Helena Huskies had a strong showing at the event as well with eight top-15 finishers in their respective events.

It was four in the top 10, however, that highlighted the meet for the Huskies.

Brooklyn Kirksey was responsible for two of those top-10 finishes, taking fourth and sixth in the 60-meter dash, respectively.

For the boys, it was Aspen Warren and the 4X400-meter relay team with the high finishes.

The Briarwood Lions and Calera Eagles also had impressive showings, with each team posting a second-place finisher in addition to other top finishes.

Briarwood had four top-10 finishes in the meet, all from the girls, while the boys were highlighted by two top-20 finishes.

Beyond that, the 4X400-meter relay team finished ninth with a time of 4:36.14 for another strong team effort.

Individually, Bela Doss and Resse Rasmussen each finished 10th in their respective events.

Charlie Thompson led Briarwood’s boys with a finish of 12th in the high jump thanks to clearing 5 feet, 6 inches, while the 4X800-meter relay team finished 17th behind a time of 9:24.47.

Calera was led by Braylin Farrington. The junior finished second in the 400-meter dash with a time of 50.13 seconds.

Jordon Bray was the other top-10 finisher for the Eagles, claiming eighth in the 400-meter dash with a time of 59.97 seconds.

The Shelby County Wildcats competed in the event as well and were led by Victoria Farish in the shot put. She finished 16th in the event thanks to a distance of 29 feet, 6.25 inches.

The boys also got a top-20 finish from Luke Lewis in the high jump after he cleared 5 feet, 2 inches.

The Westminster at Oak Mountain Knights got their biggest highlights from three different relay teams.

The girls grabbed the only top-10 finish for the Knights in the 4X400-meter relay. They finished fifth behind a time of 4:29.57.