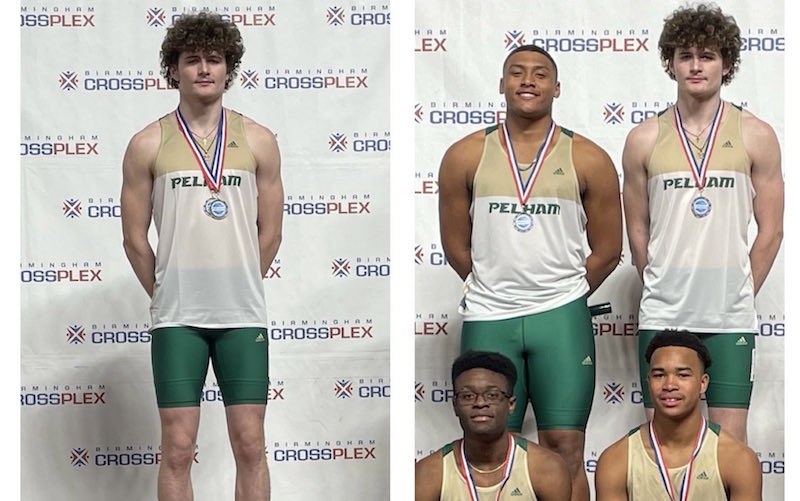 The Pelham track and field team had several highlights at this year’s Ice Breaker Invitational with 16 top-five finishes. (Contributed)

BIRMINGHAM – The Pelham track and field team put together an impressive showing at the 2022 Ice Breaker Invitational #1 on Saturday, Jan. 8 with 16 finishes inside the top five.

Of those 16 top-five finishes, the Panthers had a total of 12 podium finishers during the impressive showing.

The relay teams for the Panthers were one of the brightest spots, as the Panthers finished on the podium in five of the six relay events between the boys and girls meet.

Individually, the Panthers also had an impressive event with Avery Childress one of the top highlights.

Childress took home the top spot in the 400-meter dash behind a time of 51.19 seconds, which marked a new personal record for him. He also set personal records in the high jump and the long jump during the day as well.

He finished on the podium in the high jump, clearing 5 feet, 8 inches to take third in the event, while he finished 10th in the long jump with a distance of 18 feet, 9 inches.

Gabe Gamble also had a solid performance in the long jump, finishing one spot behind his teammate in 11th after totaling 18 feet, 5.75 inches.

Gamble’s biggest highlight of the event, however, came in the triple jump where he totaled 39 feet, 9 inches to grab third and finish on the podium.

The other victory on the day for Pelham came from Caleb Newell, who put together an impressive showing in the shot put. He totaled 48 feet, 4 inches to claim the top spot, while teammate Jackson Davenport finished just behind in second with a distance of 44 feet, 1.25 inches.

Brayden Marlowe and Nathan Tau each added finishes of second for the Panthers as well.

William McGough and Devon Adams each added top-five finishes for the boys, while Kennedy Lyles was the highest finisher for the girls individually.

Lyles’ strong performance came in the long jump, where she finished fifth behind a distance of 15 feet, 3.5 inches.