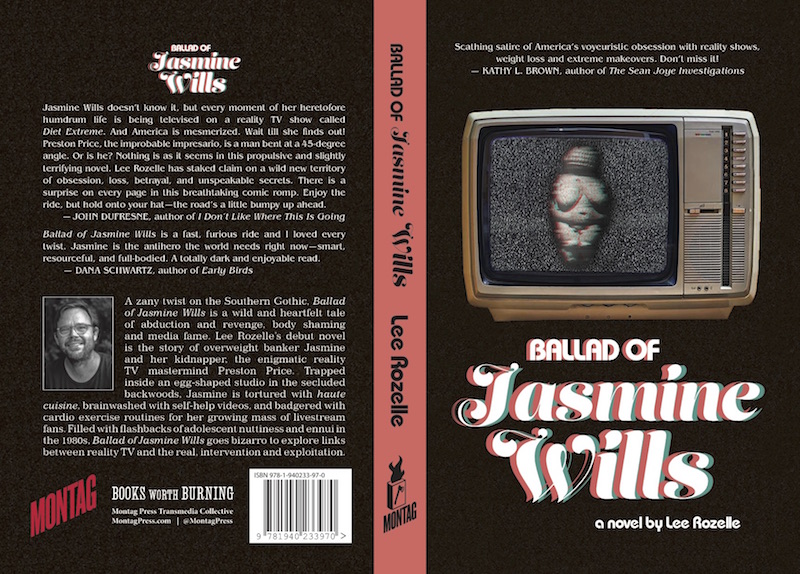 Lee Rozelle, an English professor at the University of Montevallo, has published his debut novel, Ballad of Jasmine Wills, a story about an overweight banker who is kidnapped and made the star of a reality TV show. (Contributed)

MONTEVALLO – A kidnapping story, a bitter bank employee and an unsettling reality TV show commercial might seem unrelated, but for University of Montevallo professor Lee Rozelle, they converged to give him a springboard for his first novel.

“My dad is a great storyteller, and one day when we were sitting around in the kitchen he started spinning a tale about the kidnapping of a woman who some might consider overweight, a tale that he used in his own novel Extreme Intervention,” Rozelle said. “Around that time I went to my local bank to open an account and the banker there was acting mean as a snake. And, also around that time I saw a really disturbing commercial from the show Fear Factor about people eating worms. Somehow these three events—the kidnapping story, the mean banker and the reality TV show—came together to become the foundation for the book.”

Rozelle’s debut novel, Ballad of Jasmine Wills, follows an overweight banker who is kidnapped and made the star of a reality TV show called Diet Extreme.

Locked inside a studio in the middle of the Alabama woods, Jasmine is tortured with fancy food, brainwashed with self-help videos and badgered with exercise routines for her growing mass of livestream fans in this tale that explores issues like weight loss, diet, disability and media fame.

Rozelle said writing the novel, which was released in December, was difficult and took years to finish.

“When I went to the bank and the employee was being cranky, I thought, ‘Why is she being like that? What causes someone to become so bitter?’” Rozelle said. “Her Clay County accent came to me instantly. Her abductor, the reality TV mastermind Preston Price, was a little harder. Preston is kind of a cross between Jerry Lewis as the Nutty Professor and Hannibal Lecter … minus fake teeth and the cannibalism.”

He said he also wanted to use Southern Gothic tropes found in novels like The Ballad of the Sad Café and Fried Green Tomatoes at the Whistle Stop Café to discuss body positivity and self-esteem issues.

Rozelle is also the author of nonfiction books Zombiescapes & Phantom Zones and Ecosublime.

In addition, he has published short stories in Cosmic Horror Monthly, Southern Humanities Review, HellBound Books’ Anthology of Bizarro, Shadowy Natures by Dark Ink Books, If I Die Before I Wake Volume 3 and the Scare You to Sleep podcast.

Ballad of Jasmine Wills is available in paperback and e-book from Amazon. An audiobook is on the way.

Regarding new projects, Rozelle has a short story collection in the works about watershed preservation in Alabama—stories filled with body horror, 3-D bioprinters, genetic engineering and retired preachers running around wearing Lucha masks.

But lately, he has mostly been handling the emotions of releasing his novel into the world.

“It feels a little bit like having a newborn baby,” Rozelle said. “There’s elation, terror, worry and the perhaps delusional belief that the little fellow is going to be just fine.”

For more information about Rozelle and his work, visit Leerozelle.com.