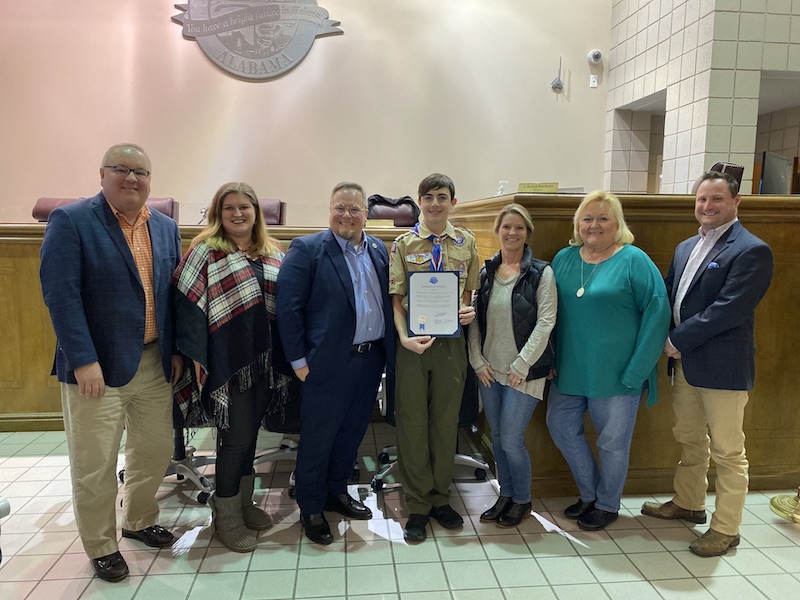 Helena City Council held their monthly meeting on Monday, Jan. 10 and one of the items on the agenda was honoring local Eagle Scout Zac Frowline. (Reporter Photo/Michelle Love)

HELENA – The Helena City Council had a full agenda on Monday, Jan. 10, including a collaboration that will feature an updated publication for the city.

To begin, however, Mayor Brian Puckett declared the month of January as Human Trafficking Awareness Month.

“Each year in January, we want to proclaim January as Human Trafficking Awareness Month in the city of Helena,” Puckett said. “We want people to be aware of the signs and make sure everyone stays safe. We have our emergency responder personnel that they always do a fantastic job, so we want to make sure everyone is aware.”

The Council then honored Eagle Scout member Zac Frowline by presenting him with a special document thanking him for his hard work reconstructing a bridge at Cahaba Lilly Park.

Frowline explained he stumbled across the bridge while riding his bike and found it was rotting and unfit for use. Frowline made it part of his Eagle Scout project to fix the rotting portions of the bridge so nobody could get hurt if they used it.

Next on the agenda was the approval of a bid from Shelby County Newspapers, Inc. (SCNI) to begin producing the city of Helena’s monthly newsletter. The Council approved the bid with the change taking effect immediately.

“Shelby County Newspapers, Inc. (SCNI) is pleased to partner with the city of Helena for the development of Helena’s monthly magazine and annual guide,” said Daniel Holmes, the general manager of SCNI. “Our goal is to expand our lasting relationship with the city of Helena as we work together to tell the stories important to residents of Helena. We are grateful to the city’s administration for entrusting us with such an important communication tool, and we will work hard to exceed their expectations for this partnership.”

SCNI has delivered award-winning community publications to Shelby County for 179 years and currently operates the Helena Reporter in addition to several other newspapers and magazines.

“We are looking forward to applying our expertise in digital and printed storytelling and design to further the efforts of the city’s leadership to communicate consistently and effectively with residents,” Holmes said.

Another major item on the agenda was the approval of an amendment to the city budget for the Helena Parks and Recreation department to upgrade and add to the park batting cages.

“The budget amendment will be up to $51,550 to repair the batting cages we have plus build two more,” Councilmember Alice Lobell said.

Parks and Rec Director Bill Miller added that it would be a benefit to the facility.

“If built correctly, these batting cages will last a good five years, and the ones we have right now are pushing 20 years old,” Miller said.

The Council then approved the bid.