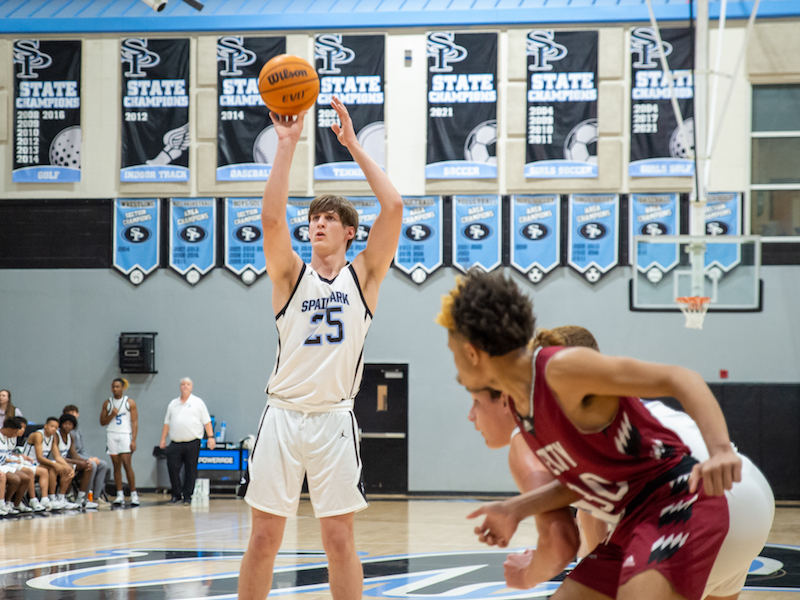 The Spain Park Jaguars overcame early offensive struggles with a big second half to take down Hewitt-Trussville on Tuesday, Jan. 11. (File)

TRUSSVILLE – Behind a hot night from the free throw line, the Spain Park Jaguars were able to improve to 2-0 in area play on Tuesday, Jan. 11 with a victory against Hewitt-Trussville.

Spain Park made its last 17 free throws of the game to help make the difference in a 49-37 victory that saw the Jags outscore the Huskies 18-9 in the final quarter of the game to complete a comeback win.

Early, however, Hewitt-Trussville gave Spain Park’s offense all it could handle.

The Jags struggled to find a rhythm in the opening quarter, which led to a quick deficit.

Spain Park’s defense did do enough to remain in a tight game, however, as the Jaguars also gave up single digits in an impressive effort that lasted most of the game.

Hewitt’s nine points were enough for a 9-5 lead at the end of the opening quarter, which began a defensive slugfest in the opening half.

Spain Park bounced back with a double-digit second quarter, totaling 11 points, which was enough to get within two points as Hewitt posted nine more to take an 18-16 lead at the break.

But, as they have done many times this season, the Jags capitalized on the break with adjustments, which paid off in the second half.

With shots falling, Spain Park almost matched its first half total in the quarter alone with 15 points to jump in front by three points going to the final period.

That seemed to be the spark the Jags needed, as they came out and went on an 8-4 run in the first five minutes of the final quarter to extend the lead to 39-32.

From there, Spain Park made its free throws down the stretch to close the game on a 10-5 run to pick up.

Colin Turner led Spain Park with 19 points, while Josh Harrington finished with 10. Behind that, Chase James chipped in nine points.