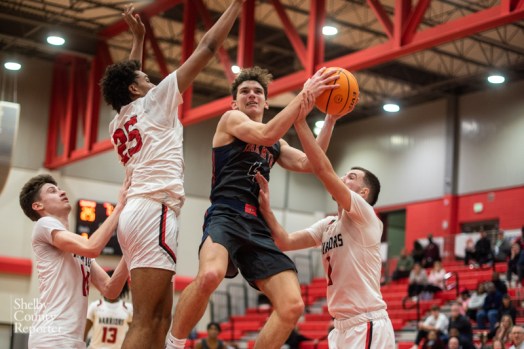 Oak Mountain put together a 17-4 run between the end of the second quarter and early in the third quarter to create some separation before withstanding a comeback attempt from Thompson in a 43-41 win on Jan. 13. (Reporter photo/Keith McCoy) 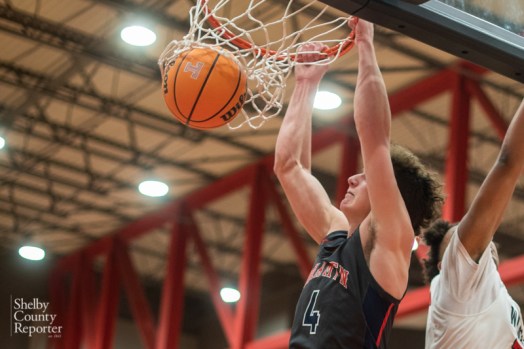 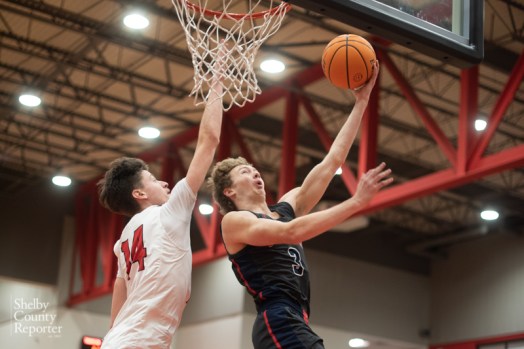 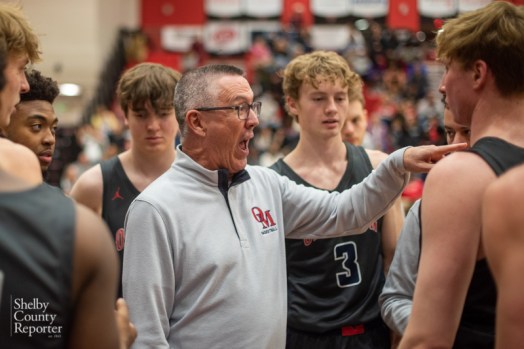 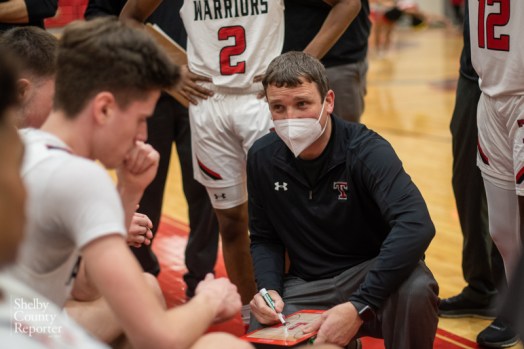 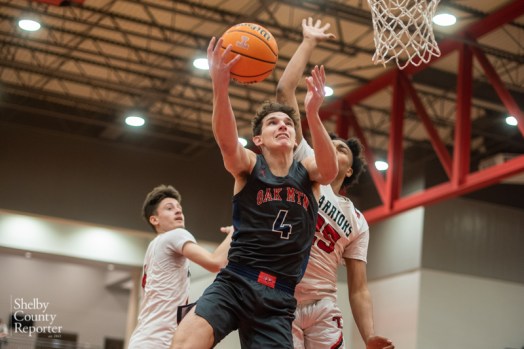 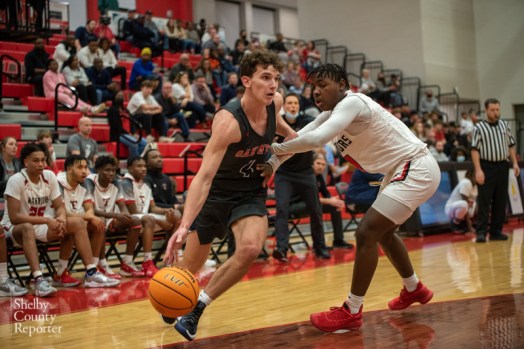 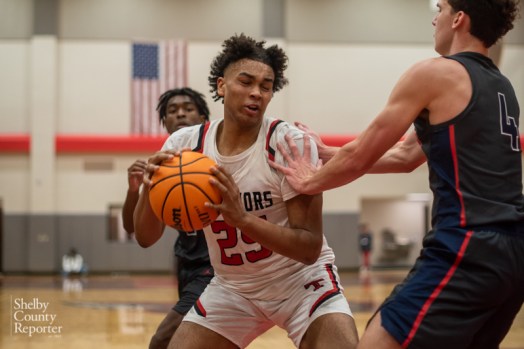 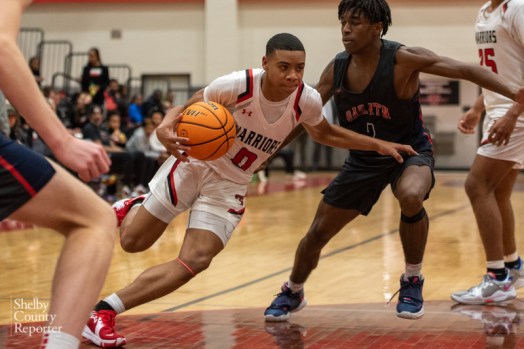 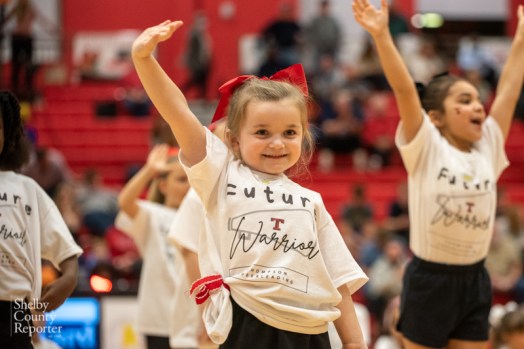 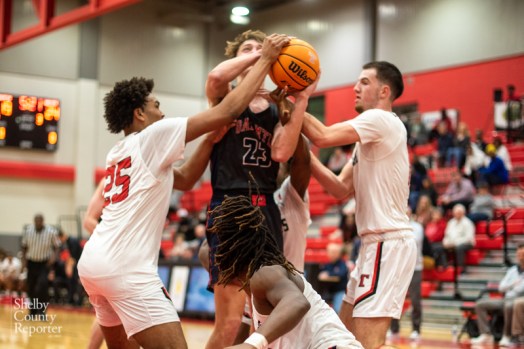 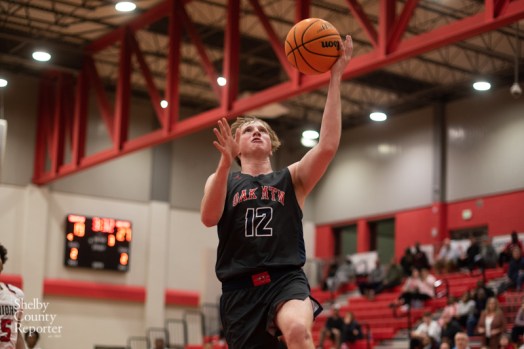 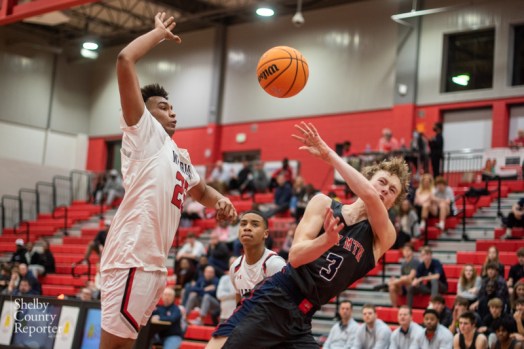 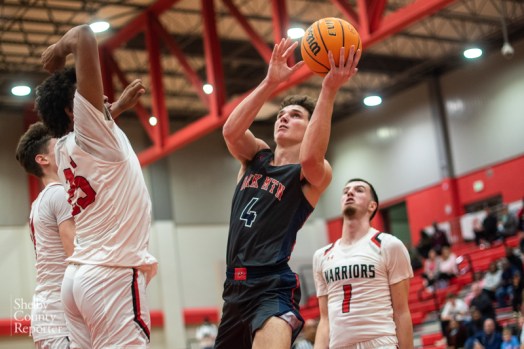 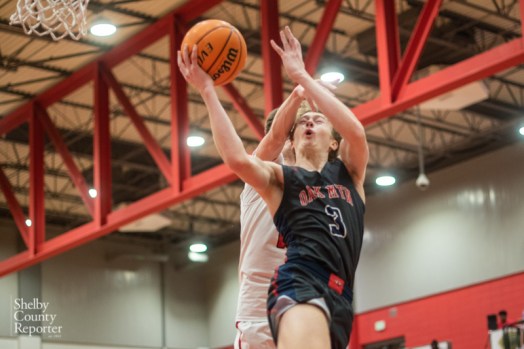 ALABASTER – The Oak Mountain Eagles were able to withstand a comeback from county foe Thompson on Thursday, Jan. 13 to improve to 3-0 in area play.

The Eagles led by 10 going to the final quarter but saw their lead dwindle down to one point twice in the final 1:30 of the game.

But Matthew Heiberger, who had several big plays in the game, threw down a tomahawk dunk with 1:10 left for one answer, while Wilder Evers hit a free throw for another answer as part of a six-point final quarter.

Evers hit four of his six free throws in the fourth quarter with a jumper to total six of his 13 points when the Eagles needed him most to help close out 43-41 victory.

With the victory, Oak Mountain (19-3) remained undefeated in the area with wins against each area opponent, while Thompson fell to 1-2 with two single-digit losses.

The first half featured several runs from both teams, which prevented either from taking control of the game in the first 16 minutes.

Thompson struck first with a 4-1 run in the first two minutes of the game, while Oak Mountain answered back with three to get within one.

From there, neither team could find an offensive rhythm, as those seven combined points became the only ones through the first six minutes of the game.

Over the final two minutes of the quarter, however, Oak Mountain seemed to adjust to the road environment.

The Eagles got points from Devan Moss, Wilder Evers and Brady Dunn to conclude what was a 9-0 run before Thompson ended the quarter on a 3-pointer from Tre Adolphus to stop the bleeding and make it a 10-7 Eagles’ lead heading to the second quarter.

Thompson built off that basket, going on an 8-0 run following the first basket of the second period from Evers to storm in front for a 15-12 advantage.

Oak Mountain, however, replicated that with an 8-0 run itself to quickly regain the lead.

A key stretch of that run saw Matthew Heiberger pick up steals on back-to-back possessions to lead to the final two baskets of the half and a 20-15 lead for the Eagles at the break.

That momentum swing carried into the second half for the Eagles, who carried the run all the way to 17-4 through the first five minutes of the third quarter.

That put Oak Mountain up by 10 points following an Evers alley-oop dunk, an Ean Gove layup, three free throws and a Ryan Giegel steal and layup.

Then, for the second quarter in a row, Heiberger finished strong—this time with scoring.

In what became a back-and-forth final few possessions, he matched two Thompson made shots with two of his own to create a 33-23 Oak Mountain lead.

But Thompson had shown flashes throughout the game, and the Warriors didn’t back down without a fight in the final quarter.

The Eagles held a 10-point lead up to 38-28, but the Warriors started their comeback trek there.

With 4:30 remaining, they used an 11-2 run behind five different scorers to trim the deficit all the way down to one at 40-39 following a Tre Adolphus 3-pointer with 1:26 left.

Hebeirger and Roberson traded baskets after that creating a 42-41 lead with 40 seconds left.Following a 1-2 mark from Evers at the line, Roberson tried to get off a three for the lead in the final 15 seconds, but a strong defensive effort made it challenging as the shot fell short, leading to the final score.

Thompson was led by Roberson with 10 points, while six players finished with at least six points in the loss.