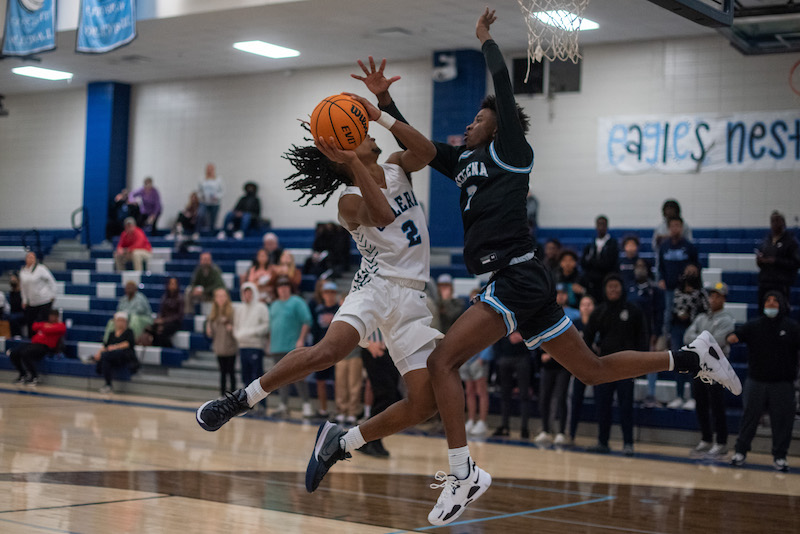 Xzayvion Childress totaled 24 points against Chilton County on Friday, Jan. 14, and was one of three in double figures to help Calera pick up a 76-69 area win. (Reporter photo/Keith McCoy)

CALERA – In an area that is wide open, the Calera Eagles got a big bounce-back win on Friday, Jan. 14 by taking down Chilton County.

In a tightly-contested game, the Eagles finished off a thrilling second half that saw both teams score 20 or more in each quarter by scoring 26 to make the difference in a 76-69 victory.

Coming off an 89-85 overtime loss to Helena to open area play, the Eagles didn’t show any signs of tired legs, showing balance from several players for the second game in a row.

And each player was needed in a back-and-forth battle with a 16-4 Chilton County team that entered 1-0 in area play off a win against Pelham.

Calera, however, did just enough in the first half to take a slight lead into the break.

The Eagles outscored Chilton 14-13 in the opening quarter of the game to gather a one-point advantage.

That exciting first half, however, set the tone for an even more thrilling second half that saw the teams go blow-for-blow with one another on the offensive end of the floor.

Similar to the first half, however, Calera seemingly had an answer for every big shot from Chilton County.

In a quarter that saw a combined 41 points between the two, it was the Eagles who were able to extend their lead by one more point after outscoring the Tigers 21-20.

That carried over into the final quarter as well.

Early in the fourth period, Chilton drew to within a point on a couple of occasions, but Xzayvion Childress hit two big 3-pointers to quickly put his team back up by four points.

Childress seemingly had answers every time the Tigers threatened, both at 52-51 and 57-56 in the first two minutes of the quarter.

That was the biggest stretch of the game, as Calera made the necessary late shots and free throws to gain the slightest of breathing room en route to the 76-69 win.

Childress, who totaled 38 in the OT loss to Helena, came back with 24 more in the win against Chilton County to lead the way for the Eagles. But Joe Wimberly also had another important night, following his 18-point performance with 17 points in this one. Javonte Melton also finished in double figures for the Eagles with 13 points.

Calera, Chilton County, Pelham and Helena are now all 1-1 in the area.