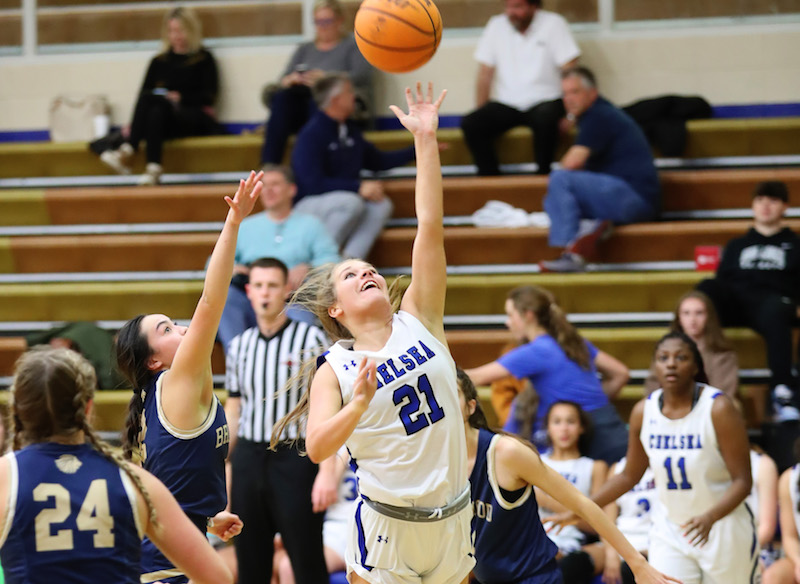 Chelsea’s Sydney Schwallie hit an and-1 with 11 seconds in overtime to help the Hornets close out No. 9 Mountain Brook for a 42-39 win. (For the Reporter/Cari Dean)

CHELSEA – With 11 seconds left in overtime of a top-10 battle between two teams a combined 32-9 on the season, Chelsea senior leader Sydney Schwallie stepped up.

In a 39-39 game, she drove to the basket, through contact and laid the ball in before then completing an and-1 to put the Hornets in front of Mountain Brook 42-39. The defense then did its job, as it has most of the season, by not allowing a shot on Mountain Brook’s final possession to pick up the three-point win.

With the thrilling victory against No. 9 Mountain Brook, fifth-ranked Chelsea not only improved to 16-5 overall on the season but took firm control of the area with a 3-0 area record and wins against each area team.

It bookended an impressive night for the Chelsea, who started the game with a bang behind 18 points in the first quarter.

Schwallie was big in the fast start as well, totaling nine points in the opening quarter on two 3-pointers and a 3-4 mark from the free throw line.

But it was a team effort in the first eight minutes, as the Hornets got at least two from Mary Cartee, Lexi Redd and Haley Trotter.

Mountain Brook, however, could only get points from two scorers. Those two scorers did do enough to keep the Spartans within six points thanks to totaling 12 between the two of them, including eight from Emma Stearns.

Then, the second quarter saw a shift.

Chelsea, normally used to being the better defensive team in every game, struggled against a very good Mountain Brook defense.

The Hornets got seven points from Redd in the quarter, but went 3-9 from the free throw line and only got one more point outside of Redd’s seven.

Chelsea’s defense, however, did enough to preserve the lead, improving from the opening quarter.

MJ Lasiter totaled seven points herself for the Spartans, while they got two more from two others to total 11 points.

That did cut into the deficit, but Chelsea still held a 26-23 lead at the half.

The rest of the way, as expected between two of the best defenses in the 6A classification, it was a defensive battle.

Chelsea never did score more than seven points in the in third quarter, fourth quarter or overtime, but neither was able to find much traction offensively, as Mountain Brook scored 10 or less the rest of the way as well.

Luckily for the Hornets, their seven in the third quarter was enough to extend the lead again thanks to their effort on the other end.

But then, it was Mountain Brook’s defense that came back to force overtime.

The Spartans gave up four points in the fourth quarter, as Chelsea went 2-5 from the free throw line.

Mountain Brook took advantage and put together a 10-point quarter behind a 6-7 mark from the free throw line to force a 37-37 tie and overtime.

In the extra period, Mountain Brook struck first when Stearns posted her first field goal since the opening quarter.

In a game of defense, however, that was the only basket for the Spartans in the extra period.

Ashley Washington then answered with a field goal to tie the game in clutch fashion, before Schwallie finished off the win with her drive to the basket.

The Hornets got three or more points from six different players. Schwallie led the way with 15, while Redd added 11.