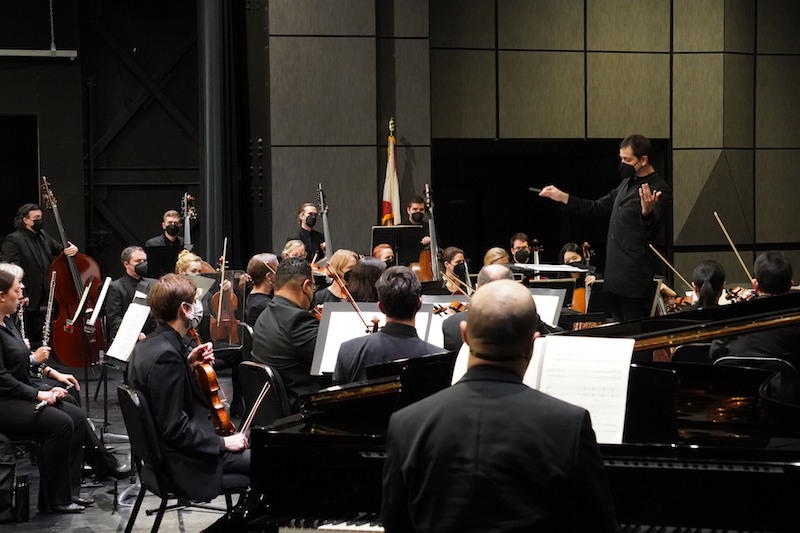 ALABASTER – The Alabama Symphony Orchestra conducted several musical performances at Thompson High School on Sunday, Jan. 8, marking the first time the entire orchestra has held a concert at the school.

She described ‘Appalachian Spring’ as a joyous musical journey through the rolling hills and boundless American countryside, while ‘New World Symphony’ is a composition based on the vast expanses of the American West.

Aside from classical music, the school also hosted the world premiere of Carlos Izcaray’s ‘Under the Shadows: An Immigrant’s Journey’, which explores the musician’s life and immigration to the United States.

“It’s about his experience as an immigrant in the United States,” Flores-Everett added. “He’s migrated numerous times throughout his life, and it’s a love story about being a part of the nation essentially.”

Izcaray serves as the Alabama Symphony Orchestra music director and was born into a family of several artistic generations in Caracas, Venezuela. Growing up, he studied conducting with his father as a teenager and went on to become a distinguished fellow at the American Academy of Conducting at Aspen.

Izcaray has won top prizes in music including at the 2007 Aspen Music Festival and at the 2008 Toscanini International Conducting Competition and is currently a dual citizen of Spain and Venezuela. He, however, divides most of his time between Birmingham and Los Angeles.

“We’d really like to highlight the world premiere aspect of it and that we are just grateful that we are able to use the Thompson performance space,” Flores-Everett said. “It’s a really state-of-the-art facility. We’ve been using it for our youth orchestra concerts, but this was a real treat to be able to have a concert there with all our ASO members.”

The Alabama Symphony Orchestra’s next performances are scheduled for February, including the ‘Birmingham does Broadway: Celebrating Love’ concert as part of the city’s Valentine Day celebrations and the orchestra’s Masterworks series, which will center around a recomposed concert of Vivaldi’s Four Seasons.