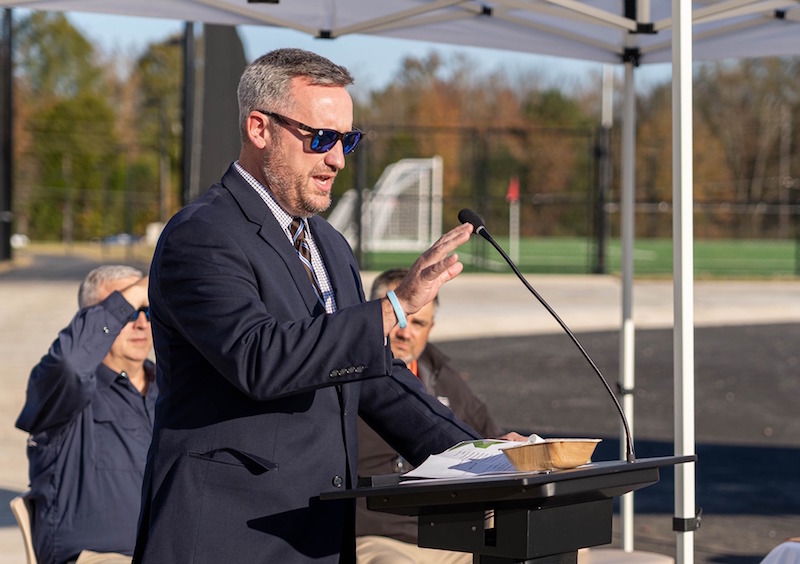 Alabaster Mayor Scott Brakefield looked ahead to what the city can expect during 2022 with multiple projects in the works. (For the Reporter/Neal Wagner)

As 2022 gets underway, Alabaster Mayor Scott Brakefield hopes to see the completion of projects happening throughout the city, as well as continued growth and development throughout the new year.

Brakefield, who initially served as a council member under previous mayor Marty Handlon for eight years, became mayor in 2020, and works daily to serve the city he grew up in.

“I am a little biased because I grew up here, but I feel like Alabaster has a small-town feel with big-town amenities,” Brakefield said.

According to the mayor, some of the projects hopefully facing or nearing completion in 2022 include new bathrooms and pavilions at the new addition of Veterans Park; improvements to parking, playground and sidewalks at Patriot’s Park; the building completion of the new police station, which will hopefully occur in about 4-6 months; construction of the city’s 11th Ave. streetscapes; Buck Creek Trail enhancements including asphalt surface; lighting and bridge work at Warrior Park; a west trail expansion to connect the trail system with Thompson High School; and continued work with the Alabama 119 project..

“We ask that people just continue to be patient with us as we work to see this through,” Brakefield said.

The widening project, which has two phases, will eventually have four lanes and a middle turn lane.

The project is a multi-phase process, with the expansion starting at the red light by the Walmart Neighborhood Market and stopping near Shelby County 12 (at the Smokey Road, Butler Road intersection).

Other items Brakefield anticipates for the upcoming year are yearly repaving improvements on multiple city roadways during the summer, a new traffic signal and intersection improvements at Shelby County 17 and Kent Dairy Road.

The county is working with the city engineer on study and designs for construction, which will be a joint city/county project hopefully installed in the winter, according to Brakefield

A new right turn lane from Shelby County 17 onto First Avenue will be constructed in the fall, and a new east/west connector road connecting Alabama 119 and Smokey Road is expected to be built by a developer in the next three years.

The city is also anticipating the partnership with Birmingham United Soccer Association to manage the city’s recreational soccer program beginning in the spring.

Brakefield said the city is facing continual growth, with the census numbers from 2010-2021 showing an increase of 3,500 residents.

“There is a lot of interest in the city of Alabaster,” Brakefield said. “People want to come here and build houses and send their kids to our schools.”

While the city has seen growth, Brakefield acknowledged that COVID-19 has provided some challenges for local businesses navigating during a pandemic.

“I think it is a testament to our residents that we have not seen any shortfall to tax revenues because of COVID,” Brakefield said. “Our residents have stayed loyal to our stores, and we have seen new stores open such as Five Below, and Home Goods being scheduled to open. We have seen several restaurants open and remain successful, but it is just like everywhere else, the challenge is finding consistent workers, and keep these businesses running the way they should be.”

Overall, Brakefield said the city has a lot of community pride and believes the residential number of about 35,000-40,000 is a “sweet spot.”

“We have nice places to shop, nice parks and great schools, but we still have a neighborhood environment feel and I think that is a good mix,” Brakefield said. “Our city is a place where people get excited about the community they live in.”