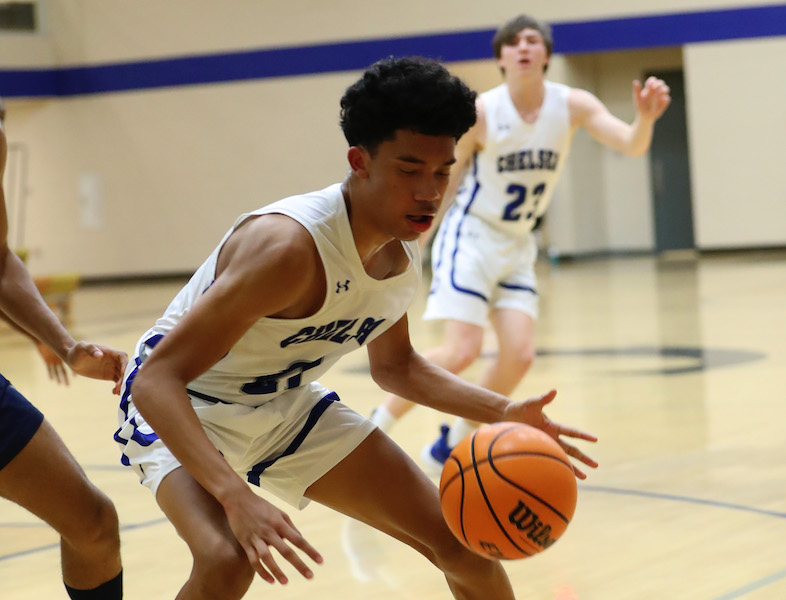 Chelsea’s boys and girls basketball teams both picked up wins at the Birmingham vs. Tuscaloosa Challenge on Jan. 17. (File)

BROOKWOOD – Chelsea’s boys and girls continued impressive stretches of basketball on Monday, Jan. 17, as both won their matchup at the Birmingham vs. Tuscaloosa Challenge held at Brookwood High School.

The two teams gave Birmingham two wins in the event with the boys downing Central-Tuscaloosa 47-43 and the girls grabbing a 46-40 victory against a 16-win Northridge team.

With the win, the boys won their fourth in five games and the girls notched their fifth win in a row.

Entering off a win against No. 2 Mountain Brook, the boys showed their confidence early against Central, outscoring the Falcons 14-4 in the opening quarter.

Avery Futch picked up right where he left off the Friday before with six points in the opening quarter, while Aiden Owens did the same with six as well.

In addition to three field goals from each of those players, Alex Redd went 2-2 from the free throw line, while the entire defense bonded together to hold Central to one field goal and two free throws.

The Hornets spent the rest of the game fending off the Falcons, but they scored in double figures in every quarter to keep their lead.

The same three players each had four points in the second quarter to help Chelsea add 12 more going into the half, while Central chipped away at the deficit with 14 points to bring the game to 26-18 going to the half.

The Falcons went on to outscore the Hornets in every quarter the rest of the way, but never by more than two points.

Out of the break, Central put together a 12-point quarter, but Chelsea’s six made free throws and two field goals were enough to total 10 and remain in front 36-30 going to the final quarter.

The free throw shooting then became key in the fourth.

Chelsea hit five of seven from the line in addition to three field goals in the final period, which became enough to fend off the Falcons, who totaled 13 points in the frame.

Futch and Owens led the Hornets with 14 points in the win, while Owens finished just behind with nine. In all, nine players scored for Chelsea.

In the girls game, it was a similar story as the Hornets jumped out to an early lead in the opening quarter.

A 5-0 run, including a 3-pointer from Mary Cartee, eventually turned into a 13-6 lead late in the first quarter.

From there, Chelsea put together a 10-4 run capped off by a Lexi Redd 3-pointer to take a 23-10 advantage midway through the second quarter.

From there, Northridge battled back, finishing the game on a 17-10 run to make the final score look closer at 46-40, but the uphill climb was too much for the Jaguars.

Lexi Redd led Chelsea with 17 points in the win.