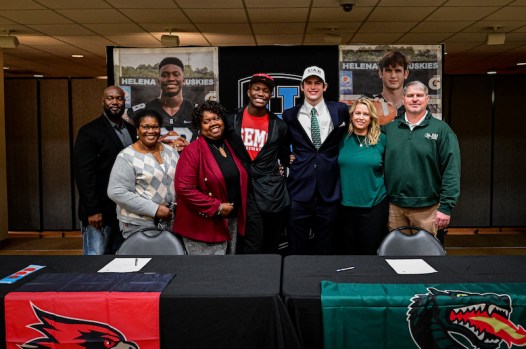 Helena’s J.C. Sivley and Joel Logan held a special signing ceremony together on Sunday, Jan. 16 to celebrate each going on to play college football. (For the Reporter/Jeremy Raines) 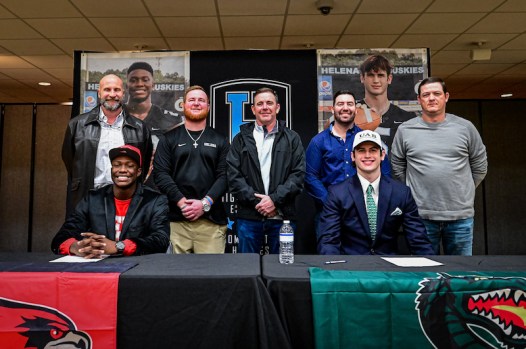 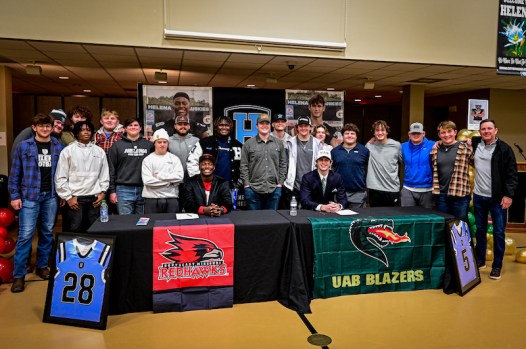 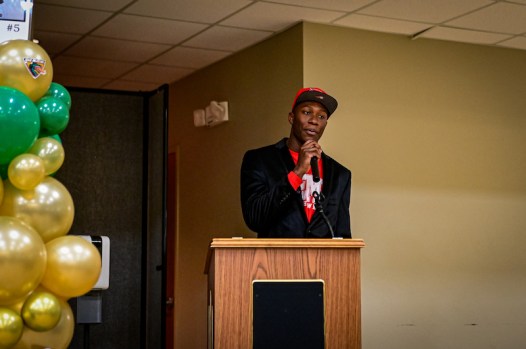 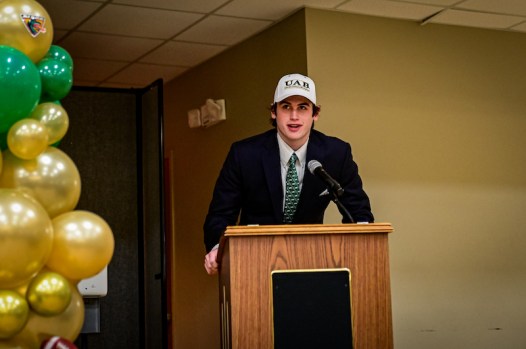 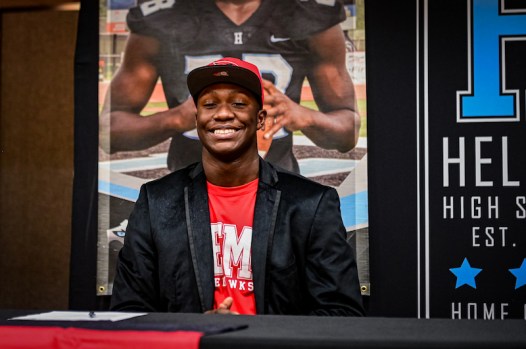 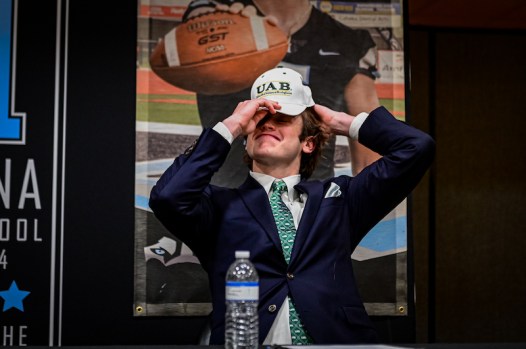 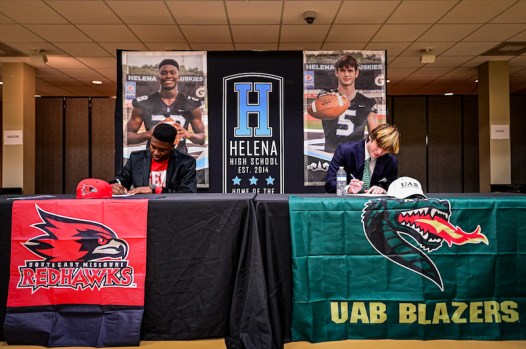 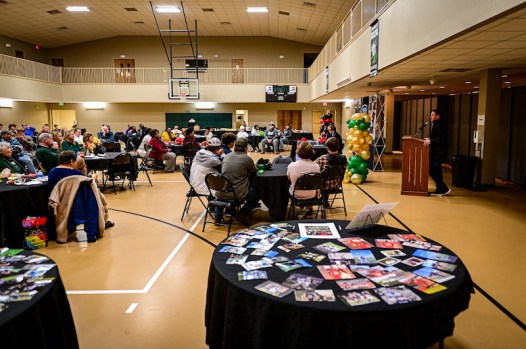 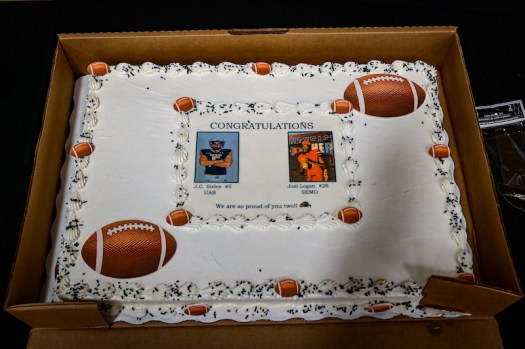 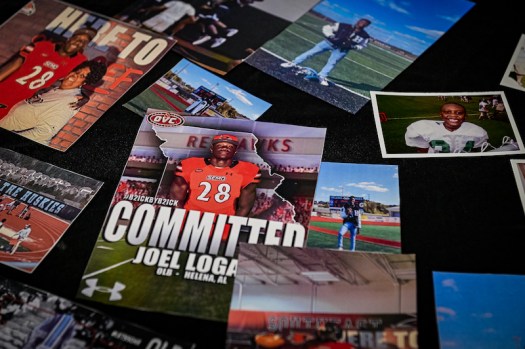 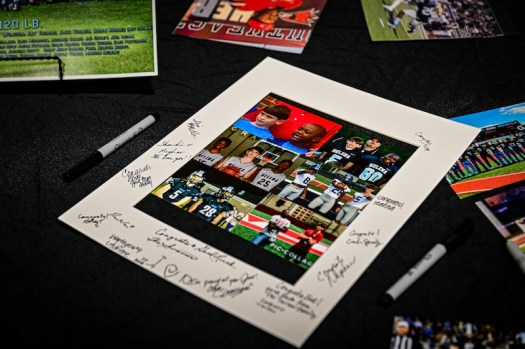 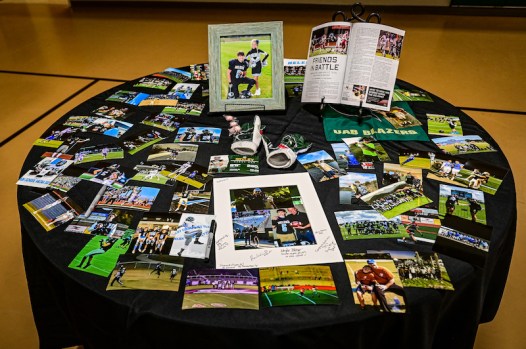 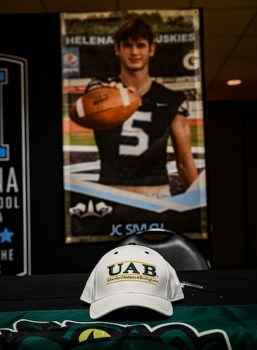 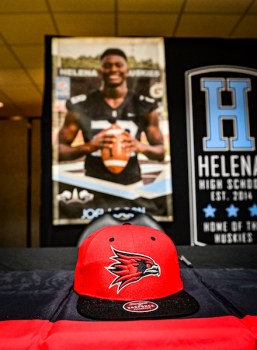 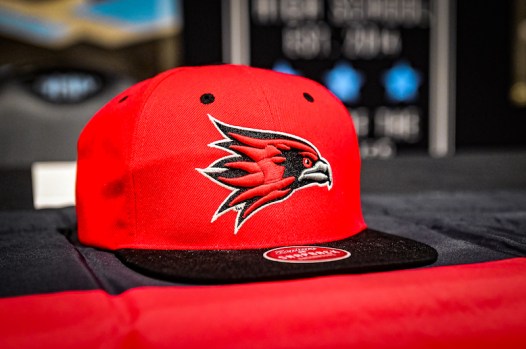 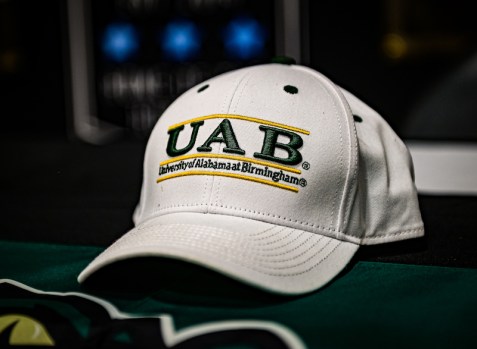 HELENA – In the fourth grade, Joel Logan stepped onto the football field as a receiver ready to make his debut in Helena’s youth recreation league as the new kid looking to make a splash.

J.C. Sivley, however, had already implanted himself as a receiver and wasn’t going to let Logan waltz in without some friendly banter.

“I guess you’re the new kid, huh,” Sivley said, before giving him a hard time about trying to play receiver.

From there, a lifelong competition and friendship like no other blossomed.

Now, the two will go their separate ways, but they’ll continue chasing a dream after each signed with colleges on Sunday, Jan. 16.

Following a special four years with the Huskies, Sivley signed with The University of Alabama at Birmingham and Logan signed with Southeastern Missouri State University.

Sivley, who was a true tight end for the Huskies during his senior season, was not only a strong blocker, but he was a mismatch for many defenses because of his ability to catch the ball down the field.

He used his speed to beat linebackers, and his size to out-physical defensive backs for the ball. Those traits led to several clutch catches, while he finished as the fourth-leading receiver in the county thanks to 46 receptions for 792 yards and eight touchdowns.

Now, he’ll join the Blazers hoping to have a similar impact throughout his time at UAB.

Logan’s season was also a season that quietly was near the pace of two of the best edge rushers in the country.

He finished the season with 21 tackles for loss and 14 sacks, trailing only top national recruits Peter Woods and Jeremiah Alexander, while he also totaled 61 tackles.

His speed off the edge and ability to shed blockers was among the best in the state this past season, which was key in leading the Helena defense.

Both players were named to the All-County team this season for their efforts as well.

Playing alongside each other since elementary school, their final season together marked a special transition into the next step.

“That’s my best friend,” Logan said before the season. “We do everything together. It started in rec league and his just kept growing from there.”

Playing opposite of each other on the team, they pushed each other all summer in one-on-one drills with Logan trying to beat Sivley and Sivley trying to keep Logan in check—just as they had since they first met one another.

They did that to give their team and each other the best shot possible going into their senior season, and it ended with a region championship, a playoff berth, and now both of them continuing to live out a dream at the next level.