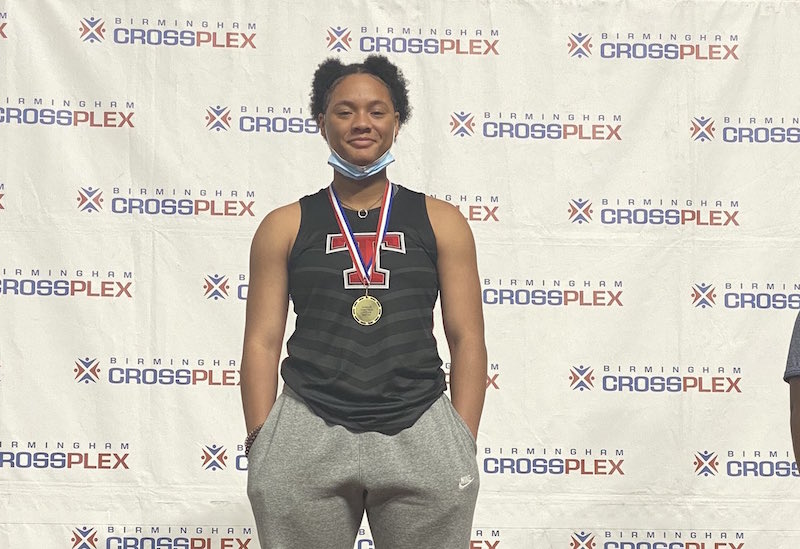 BIRMINGHAM – It was a special day at the Hump Day Octameet on Wednesday, Jan. 12, as four local track and field teams combined to total 24 podium finishes and eight wins at the Birmingham Crossplex.

It was a big day for the Thompson Warriors, who had four wins between the boys and girls as well as seven total podium finishes.

Eli Sutton and the 4X200-meter relay team each finished each picked up wins for the boys.

Sutton won the triple jump behind a distance of 43 feet, 4 inches, while the relay team put together a speedy time of 1:34.17.

Gavin Horton added a finish of second in the pole vault after clearing 13 feet, 9 inches, while Bradley Franklin took third in the 60-meter hurdles thanks to a time of 8.99 seconds.

For the girls, it was Serenity Thomas and Akasha Dudley who put together wins.

The Oak Mountain Eagles were the other Class 7A team in attendance, totaling six podium finishes and two wins.

The 400-meter dash was a big highlight for the Eagles, as Cade George won the event and teammate Quest Agee finished second with times of 50.35 seconds and 50.79 seconds, respectively

Mitch Allen also had a big day for the Eagles, winning the long jump after reaching 21 feet, 3 inches. In addition to that, he finished second in the triple jump with a total distance of 42 feet, 4.5 inches and third in the high jump after clearing a height of 5 feet, 11 inches.

The Pelham Panthers had a big day at the event with 10 athletes finishing on the podium.

Six of those podium finishers came from the boys, including a win from William McGough in the 60-meter dash. He finished the event with a time of 7.10 seconds to claim the top spot as the Panthers’ only winner of the day.

Caleb Newell also claimed second in the shot put after a distance of 48 feet, 4.75 inches.

Davenport finished one spot behind Newell in the shot put thanks to a distance of 44 feet, 4 inches, while Adams and Gamble claimed third in the 400-meter dash and triple jump, respectively.

Adams finished his race with a time of 51.68 seconds, while Gamble totaled 39 feet, 5.5 inches in the triple jump.

The girls also had four finish on the podium, led by Kennedy Lyles in the long jump. She finished with a distance of 15 feet, 6 inches.

Jordan Williams also had a big day with a pair of third-place finishes. She took the final podium spot in both the 60-meter dash and 400-meter dash behind times of 8.32 seconds and 1:02.16, respectively.

Brooklyn Kirksey had a big day for the Helena girls, winning the long jump with a distance of 15 feet, 10.24 inches and also claiming fourth in the 60-meter hurdles thanks to finishing the race in 10.12 seconds.

Sydney Risch and Lamaria Bennett finished in the top five of their respective events as well. Risch finished fourth in the pole vault after clearing a height of 8 feet, 3 inches, while Bennett finished fifth in the 60-meter dash with a time of 8.38 seconds.

For the boys, three athletes finished in the top five.

Kenney Spears was the highest of the three, finishing fourth in the 400-meter dash with a time of 52.24 seconds.