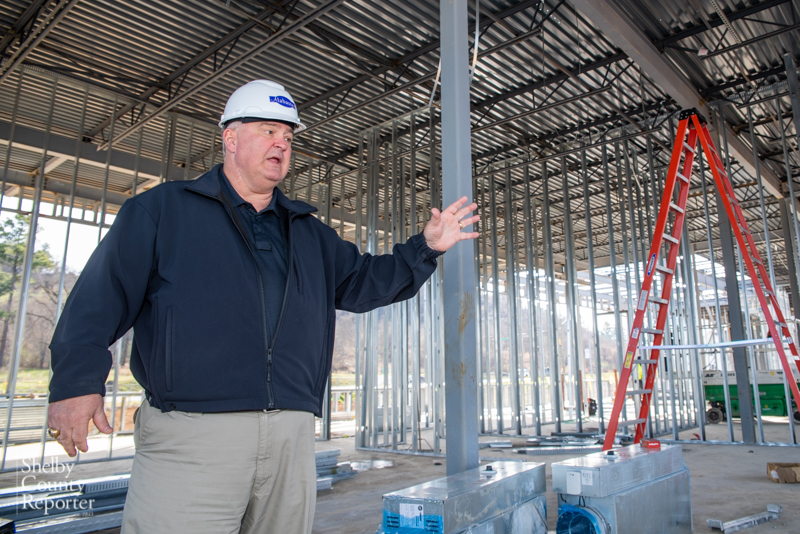 The new Alabaster Police Station is expected to open this summer after a big step in construction. (Reporter photo/Keith McCoy)

ALABASTER – Construction on the new Alabaster Police Station is nearing completion, and according to city officials, it is now expected to be fully operational by this summer.

City of Alabaster Public Relations Manager Neal Wagner said the city has made much progress with the building’s development over the last several weeks, with concrete floors being poured for the first and second stories of the main building.

It’s a major step in the project due to a concrete shortage increasing the price and timing of many construction projects throughout the country.

“We were happy to see those two big concrete pours completed, because it’s created a noticeable increase in activity on the site each day with some of the specialized trades being able to start working on their areas,” he said. “We’re on track to have the station completed this summer.”

With the obstacle of the concrete pour out of the way, the project has started to move at a higher pace in recent days.

Last week, construction crews also started installing the steel stud walls to frame the exterior and interior walls and doorways on the second floor. Wagner added that the most recent construction marks are a significant development for the project, which began in 2020.

Planning for the project initially began under Mayor Marty Handlon’s administration, with the location chosen partly out of the city’s comprehensive plan passed back in 2016 to revitalize the Siluria area of the city.

The new facility will be located on the corner of Alabama 119 and 11th Street Southwest and will join the department together in one location after many years of being spread out into multiple locations across the city.

Planning for the project began back in 2018, while ground broke on Aug. 25, 2020 with construction officially beginning last January.

Originally, the city was hopeful for the department to be operational this February, but supply shortages have pushed many construction projects back.

The total cost of the project is approximately $16 million, including the building, property acquisition costs and prep work done on site.

The city had a meeting with the project’s contractors on Wednesday, Jan. 12, to discuss new updates and future plans.