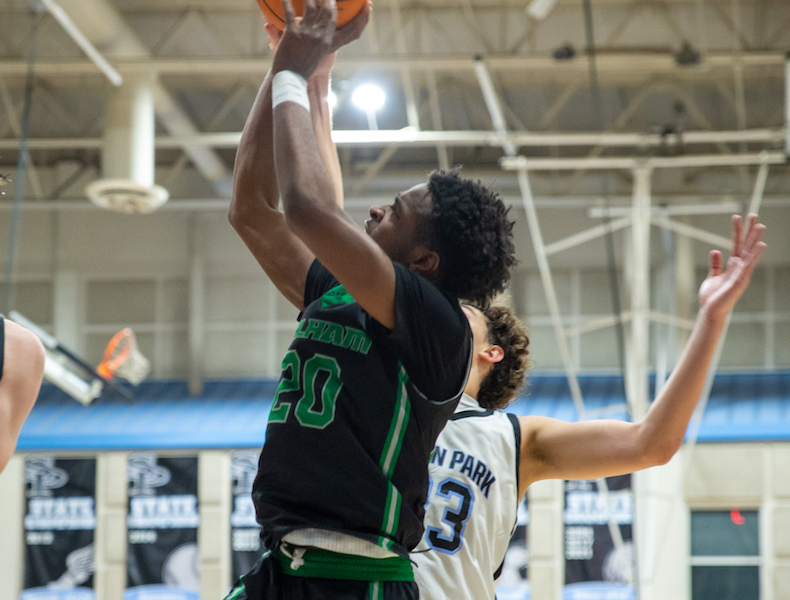 BROOKWOOD – With one second left, Pelham senior Will Lankford stepped to the free throw line in overtime of a tie game with Hillcrest-Tuscaloosa.

Competing in the final game of the Birmingham vs. Tuscaloosa Challenge hosted at Brookwood High School, the two teams were looking to break a 3-3 tie between the Birmingham and Tuscaloosa schools throughout the day.

And in a hard-fought battle, Lankford earned the chance for the Panthers when he was fouled following an offensive rebound.

Standing at the line, Lankford missed one of his two free throws, but made the important one to break the tie and give the Panthers a 70-69 lead. After the following inbound pass ended up in the hands of a Pelham player, the final second ran off the clock and Pelham prevailed in the one-point win.

It capped off another impressive night from several Pelham players, including Michael MJ Jones. The senior guard scored a season-high 45 points in the victory, while Kamari Hollis, Corey Perkins and Chase Blackburn each added at least six in the victory.

That was big in helping the Panthers get off to a strong start in the opening half of the game and then overcoming an intense finish in the fourth quarter.

Pelham jumped out of the gate with hot shooting to score 16 points in the opening quarter.

That, however, was just the start.

The Panthers not only shot even better in the second quarter, posting 19 points, but the defense limited Hillcrest to 13 points in each of the first two quarters.

That helped Pelham take a 35-26 lead into the break.

Out of the half, however, the Patriots made adjustments defensively, which allowed them to quickly overcome the nine-point deficit.

Hillcrest put together the best quarter of either team, outscoring Pelham 22-11 to jump in front 48-46 going to the final quarter.

That led to a wild finish.

Pelham was able to reclaim momentum and snatch the lead back after outscoring Hillcrest 16-10 down to the final seconds.

That gave the Panthers a 62-58 lead with seven seconds left and the ball.

That deficit for the Patriots, however, was erased very quickly.

On the ensuing inbound, Jones was called for an intentional offensive foul after he and a Hillcrest player collided.

That not only gave the Patriots two free throws, but the ball back.

In clutch fashion, the drained both free throws and then hit a buzzer-beating shot to erase the four-point deficit and force overtime in a 62-62 game.

It could have been easy for that to completely ruin any confidence the Panthers had, but they knew how close they were to pulling away late and how well they played in the first half.

And that’s the confidence they built from in overtime.

In a tight battle down the stretch of the extra period, they did enough to earn the final chance, and a physical play from Lankford gave him the chance to win it, as he did just that to lift Pelham to the 70-69 win.

In addition to Jones’ 45, Hollis posted eight, while Perkins and Blackburn each had six.