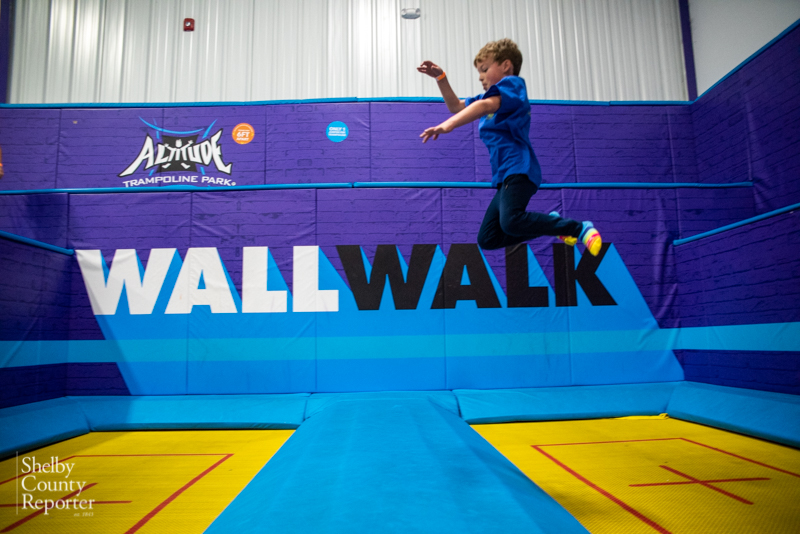 Altitude Trampoline Park first opened their doors in August 2019. In the past two years they’ve not only survived the pandemic, they’ve expanded their community and opened their doors to everyone in the Shelby County area and beyond. (Reporter Photo/Keith McCoy)

Kayla Robinson and Amber Ellis have known each other a long time. It’s that intense and lengthy friendship that helps the two of them run Altitude Trampoline Park in Pelham.

Robinson is the party manager and Ellis is the general manager, and the two work tirelessly together as a team to make sure the park not only runs smoothly, but serves as a beacon of fun and safety for the families of Shelby County.

With a friendship that’s surpassed six years of ups and downs, Robinson and Ellis thought there was nothing that could take them by surprise. Then COVID-19 hit.

“We shut down in March and we didn’t get to open back up until June,” Ellis said.

The pandemic threw the management pair into a whirlwind, being forced to refund several parties that were scheduled at the park while also trying to make things as easy as possible for guests.

“Even though we had to close to the public, me and her were still coming in and working,” Robinson said. “During the shut down, we were coming in and detailing the trampolines and still trying to keep on top of things for whenever we could reopen because we wanted everything to be perfect for when that happened.”

After the few months of being closed due to COVID-19, Ellis and Robinson had to brainstorm how to pull people back into the park.

“It really came down to marketing,” Robinson said. “You will see countless videos on our website of me doing raffles and giveaways and other stuff to try to get people to come back in.”

“We literally slashed our prices in half because a lot of people weren’t working, some people may have been still working, a lot of people had their money from the state,” Ellis said. “We wanted to make things affordable for them so they would want to get back out into the world.”

As mothers, both Robinson and Ellis approached the topic of COVID with their own children in mind in addition to keeping up with state mandates.

According to Robinson, balancing so many different agendas was a lot to handle.

“We know how we would want things to be for our children and how to keep them safe, so we always tried to stay true to that, on top of keeping up with the governor’s decisions and the state mandates,” Robinson said. “The parent in us, the workers in us, and trying to keep up with the state. It was a lot.”

With the trampolines already five feet apart, maintaining social distancing was relatively easy as long as children followed the park’s rules. While maintaining proper cleaning and sanitation guidelines, ultimately, Ellis and Robinson recommended mask use as opposed to mandatory mask use, and they left the responsibility of personal guidelines and social distancing to the individual parents.

“You know, people keep asking, ‘Well, how are you going to keep the kids from touching each other and spreading germs,’ and we were hoping that parents were sitting down with their children and explaining to them about what was going on and what social distancing was so their children understood not to run around and just cough on people,” Ellis said.

Once their doors reopened, Ellis and Robinson began strengthening their relationships with everyone who entered the building, employee or guests alike. It was a top priority of both managers that they relay to the public the family-oriented atmosphere they were wanting to convey.

“It’s a real tight knit place here,” Ellis said. “[Kayla’s] future husband works here as a manager and my husband is the kitchen manager here. We don’t own the place, but we try to run it as a family.”

“All the rest of our employees are basically teenagers, and we make it a point that while they’re here we like adopt all of them as our kids,” Robinson said. “It’s a real family-ran place. When we’re here, we act as a family. We have such good employees here.”

While some employees were forced to find new jobs during the pandemic, Robinson said there were a few who stayed to help the business persevere through the uncertainty. They even have former employees that returned through the holidays.

“It helped us so much,” Ellis said. “We have a few ex-employees that they went off to college and they called us around the holidays and asked, ‘Can I come work?’ It’s just so nice that they wanted to come back and help.”

Even regular guests at the park are considered part of the family.

“We have parents that will drop their kids off, and those kids know, okay while you’re here, I’m your mama so mind yourself and behave,” Ellis said. “And if they don’t, I’ll call their parents. They know I’ll do it, too. I’ve done it before! I would rather they be here where there’s someone who can watch them than have them out on the streets doing whatever.”

“There was one boy that he comes in all the time, and he recognized my husband at the grocery store,” Ellis said laughing. “He was like, ‘Mom, that’s Nate from the trampoline park!’ We built that type of relationship through here.”

“You know, there was a lot of bad that came from COVID, but I feel like it stripped everyone of their comfort zone,” Robinson said.  “Prior to COVID, I don’t know if we would have had the opportunity to rebuild this place the way we did. I mean, it helped us build this community with our guests that we wouldn’t trade for anything.”

Robinson and Ellis encourage everyone in the surrounding communities to come and have a good time, whether it’s a birthday party, a Friday family night, or even if they just want to come and enjoy their new and improved menu.

“We’re always here,” Robinson said. “All they have to do is call us.”

For more information about Altitude, visit their website at Altitudebirmingham.com or call 205-619-6929.