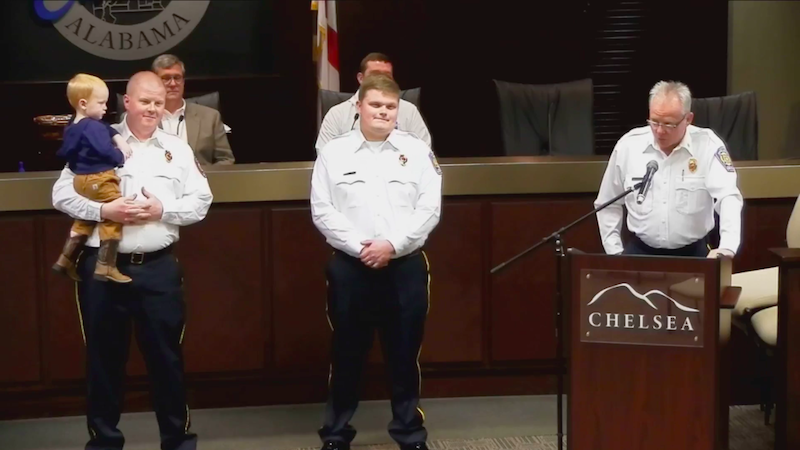 “It’s a very exciting time for Chelsea Fire and Rescue,” Deputy Fire Chief Jeff Russell said. “On Jan. 3, we announced two new officer promotions. These were a continuation from the previous test and individuals that were next in line for promotion.”

Billy Ricketts was promoted from lieutenant to captain.

Chelsea Fire and Rescue hired him in December 2017.

“Capt. Ricketts is a tremendous asset to our organization,” Russell said. “He currently serves as department training officer, as well as the other duties and responsibilities that are included as a station captain, which are numerous.”

Lee began his career as a firefighter in July 2015 and previously worked for Concord Fire and McCalla Fire.

Chelsea Fire and Rescue hired him in December 2015.

“Lt. Lee is also a tremendous asset to our organization,” Russell said. “His responsibilities include department, vehicle and apparatus maintenance, tools and equipment, as well as his normal duties of being a company officer, which include emergency response and mitigation.”

Russell described Ricketts and Lee as “go-getters” in the fire department who always complete their assignments.

Russell also thanked their families for supporting them throughout their careers.

“Without you, their success is not possible,” he said. “We miss out on a lot of things throughout our careers. We’re certainly appreciative of our wives and our children for being so understanding and letting us do what we do to save lives and protect property.”

“What you do is amazing, and to all of you, thank you for your service,” Weygand said. “Thank you for what you do for this city. It’s an especially trying time with viruses and everything else going on, and we’re grateful.”