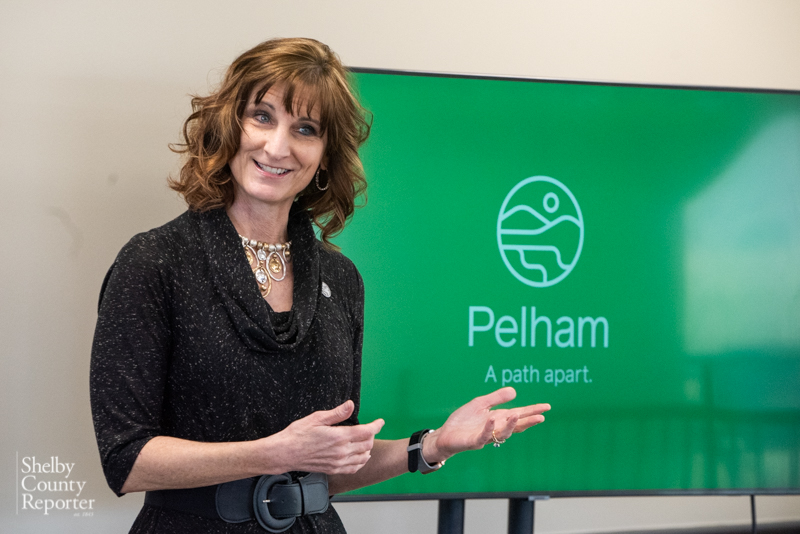 The city of Pelham unveiled their newly designed logo for the city at a special press conference on Wednesday afternoon, Jan. 19. The new logo, along with the new tagline “A Path Apart,” is a reflection of the diversity of the Pelham community. Pictured is City Manager Gretchen DiFante presenting the new logo. (Reporter Photo/Keith McCoy)

PELHAM – The city of Pelham released the newly designed logo for the city at a special press conference on Wednesday afternoon, Jan. 19.

“It was a great process to work through building a new brand,” said Pelham’s Communication’s Manager Ainsley Allison. “It’s what we heard during the comprehensive planning process that Pelham really had a lack of identity. We had a logo, but no root true brand story. That was what spearheaded this project to do this for the city.”

Allison said they partnered with Big Communications out of Birmingham to build the new logo, and she said the logo is truly representative of what Pelham has to offer.

“The logo obviously is our beautiful Oak Mountain State Park, and it really speaks to kind of the three pillars: our recreation, our support for business and our community-inspired school system,” Allison said. “Those were the three main points we heard throughout the process that rang true.”

Allison expressed her gratitude to those present for making the logo possible and for supporting the city in their rebranding process.

Those present were then presented with a video illustrating Pelham’s new brand and intertwining the logo with scenic views from around the city. The video also premiered the city’s new tagline, “A Path Apart.”

“As you all know, we’re building connectivity across the city with our Greenway Trail, and so the second portion of that is in the design phase right now, and it will allow you to run, walk or bike all the way from Pelham High School on Bearden Road through the city park and then all the way into the entrance of Oak Mountain State Park,” Allison said. “And so that connectivity with the Greenway Trail is what sets us ‘A Path Apart.’”

Mayor Gary Waters expressed his own gratitude to those who made the rebranding possible. Waters held a license plate with one of Pelham’s former taglines, “Watch Pelham Grow,” to drive home how far the city has come with its new logo and brand.

“In the many years I’ve been in Pelham in all capacities, I can tell you the thing that consistently remains the same is change,” Waters said. “From the day I got here in 1977, this was on the front of the city vehicles, and after this we had ‘Pelham: The Gateway of Opportunity.’  After that was ‘Pelham: Where People Make a Difference,’ and after that came the curly-cue Pelham in 1986.”

“This branding we have now today, I like it more than the others because it can be whatever you want it to be,” Waters said. “You can look at this logo right here, and you can see different things in it, and I like the representation it makes that Pelham is still changing and growing, and I support it 100-percent.”

Pelham City Council President Maurice Mercer thanked current and past members of the City Council as well as stake holders present who helped make the branding possible. Mercer also said today was a celebration of the city of Pelham.

“Pelham has always been a community of proud traditions, and we stand here today united in the theme of ‘Path Apart,’” Mercer said. “We now have a renewed clarity and a renewed vision to move the city forward united together.”

City Manager Gretchen DiFante said she loves the new logo because it serves as a reflection of Pelham’s diverse community.

“The comprehensive plan is a huge effort from the community and we have lots and lots of people involved in the comprehensive planning process,” DiFante said. “One of the goals out of that was to develop a new brand for Pelham. So, this exercise and the results are an outcome of the community members saying, ‘We want a new identity that distinguishes us from everywhere else.’ That amount of involvement in developing something new is foundational to success.”