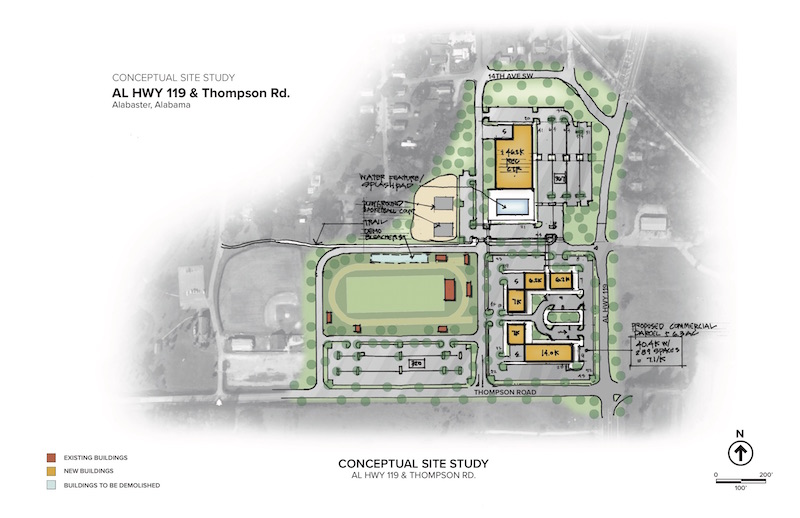 The city of Alabaster has purchased the old Sixth Grade Center and Intermediate near the intersection of Alabama 119 and Thompson Road to construct a rec center and retail development. (Contributed/City of Alabaster)

ALABASTER – The city of Alabaster is purchasing about 24 acres from Alabaster City Schools near the intersection of Alabama 119 and Thompson Road to house a new city recreational center, a retail development and park and green space.

Through the agreement, the city will pay a one-time $1 million down payment followed by $350,000 per year for up to 20 years.

“We’re so excited to move forward with this plan to breathe new life into one of our most high-profile parts of town and finally have an opportunity to give our residents the recreation center they deserve,” said Alabaster Mayor Scott Brakefield. “This will allow us to continue our vision of creating a true city center including the Police Department, City Hall, Senior Center, entertainment options and future recreation center.”

Through an agreement with ACS, the School Board’s Central Office will move from its current location and into a new location near Thompson High School within the next two years.

“We appreciate the wonderful partnership we have with the city of Alabaster, and we look forward to not only moving into a new Central Office building in the coming years, but also seeing this property on Highway 119 continue to serve our city’s residents,” said Alabaster School Superintendent Dr. Wayne Vickers.

Once the Central Office has been relocated, the city will work to make the following upgrades on the property:

The rec center will occupy what was the Sixth Grade Center before the recent move, while the retail area will occupy the space where the old Intermediate School was located.

Renderings for the property also include a splash pad/water feature that will separate the two areas. It also includes a playground, outdoor basketball courts and a walking trail.