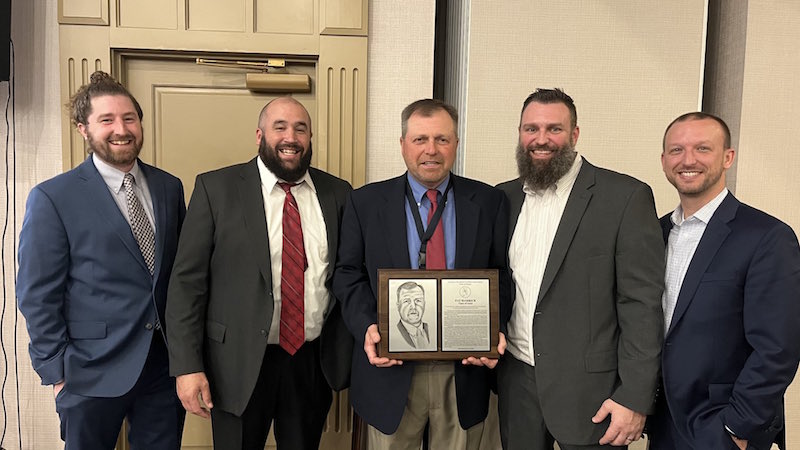 Before anyone could reach out to him, he was calling everyone he could think of to thank them for their role in what is now officially a hall of fame career.

That was the immediate reaction from former Thompson head coach and current Calera assistant Pat Hamrick got the call that he was going to be inducted into the Alabama Baseball Coaches Association Hall of Fame.

And on Friday, Jan. 21, he was officially inducted during a special ceremony in Montgomery.

“Just to be recognized by the coaches in the state of Alabama for your past services, it really meant a lot,” Hamrick said. “Seeing all of my former players and coaches show up, a lot of them now head coaches, it made for a special night.”

Hamrick said as soon as he got the call that he was inducted, he wanted to call every one he possibly could to thank them.

“You’re only as good as who you surround yourself with,” Hamrick said. “There have been a lot of coaches and administrators that have been part of my success. I called every principal that night, coaches, booster club members, superintending Dr. (Wayne) Vickers and others to thank them. They’ve all supported us, and without that support, you really can’t have a successful program.”

Hamrick got his start in coaching as a graduate assistant at what used to be Livingston University, now the University of West Alabama, under head coach Mark Hogan.

After helping lead the team to a Gulf South Conference Tournament Championship and an appearance in the NCAA Division II World Series, he knew he had found what he was supposed to do.

“Once I got into it, that became my calling,” he said. “The impact you have on young men when they’re developing, it is special, and I quickly realized that.”

In his time at Thompson, he led the Warriors to a combined record of 533-414, one state championship appearance, three semifinal appearances, four quarterfinal appearances and 11 total trips to the playoffs in the state’s highest classification.

“The belief in building a program from everyone was key,” Hamrick said of his success at Thompson. “When I got there, there were 850 students. Hoover, Vestavia, Pelham, schools like that were twice our size. I wanted to have facilities equal to them. Through hard work of the booster club over the years and others, we provided that. Without that buy in from so many, we couldn’t have done it.”

Hamrick also thanked assistant Chris Walker, who was with him for 26 of his 28 years as a coach, saying he did a lot to help with the success of the teams over the years.

He has also sent close to 100 players on to play college baseball and six to the professional ranks.

Now, following that hall of fame career and the official induction, Hamrick is doing a first in a storied baseball coaching career—becoming an assistant coach.

“It’s amazing,” Hamrick said. “I thought I could just coach and not bring it home, but it’s always, ‘How can we get better?’ You want to be successful at everything you do.”

That demeanor helped him build relationships over the years, which is what made it easy to join new Calera head coach Joe Sparacino in his first stop as a head coach.

“It’s a great guy I’m working for,” Hamrick said. “He played and coached for me. I’m just here to make the transition for him as easy as possible.”

Now, he gives back to them by picking up trash in the parking lot to help Myles, cutting grass for Hamlin and Sparacino, and doing anything else he can to make life easier for the school.

“I’m just out here to help them be successful,” he said. “You see something; you go do it. You try to make a difference wherever you go. That’s something my parents instilled in me.”