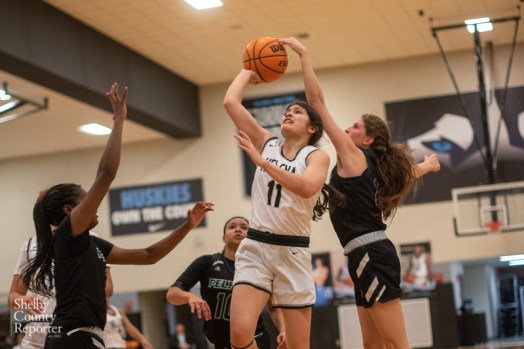 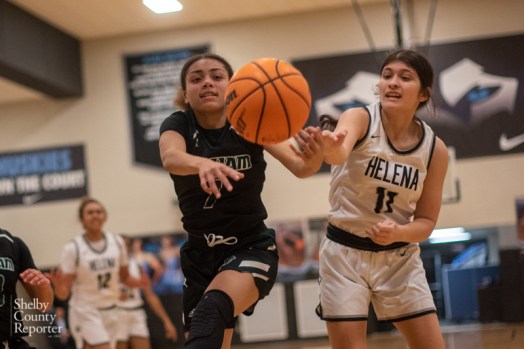 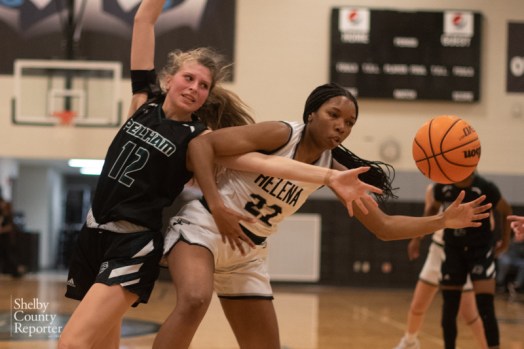 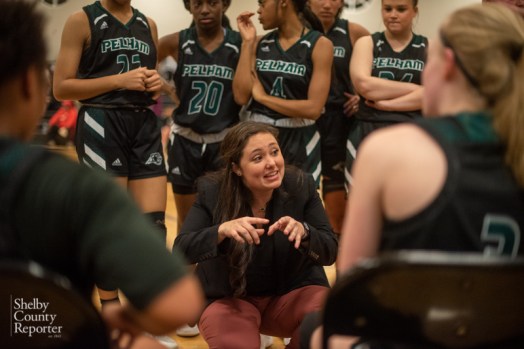 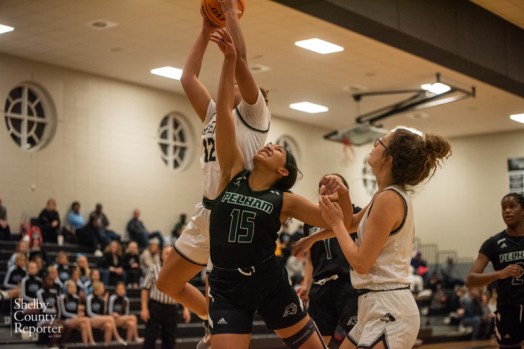 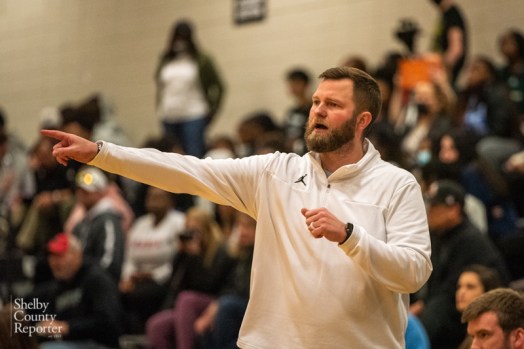 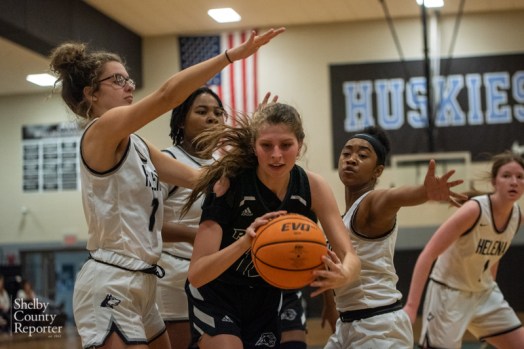 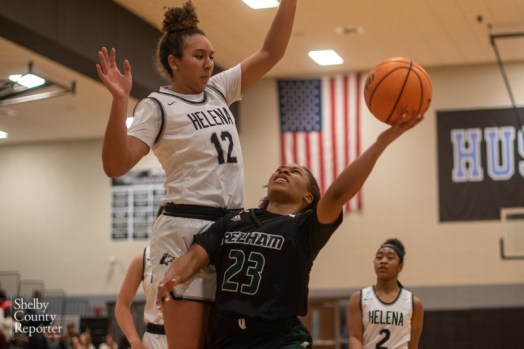 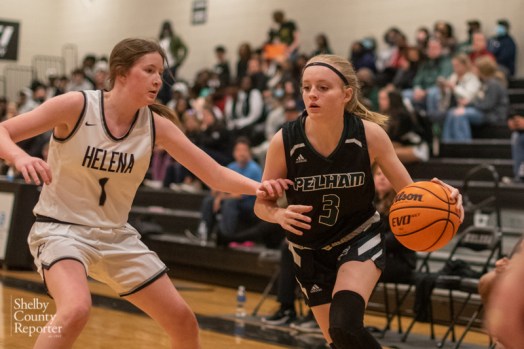 The Pelham Panthers locked up hosting rights for the area tournament with a 47-35 victory against rival Helena on Tuesday, Jan. 25. (Reporter photo/Keith McCoy) 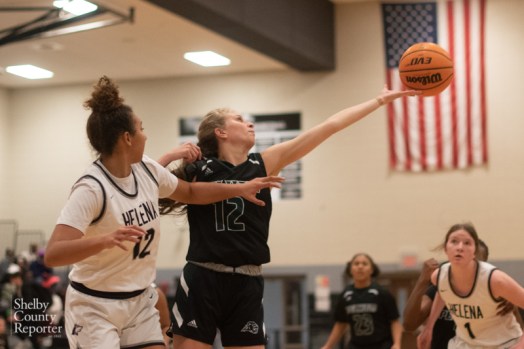 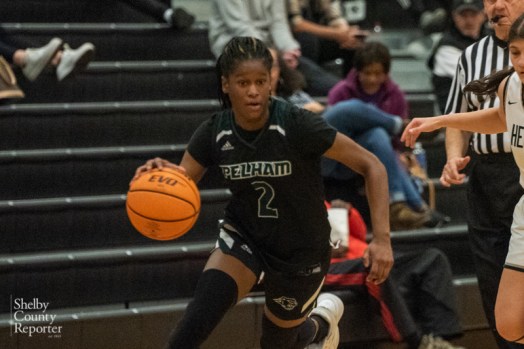 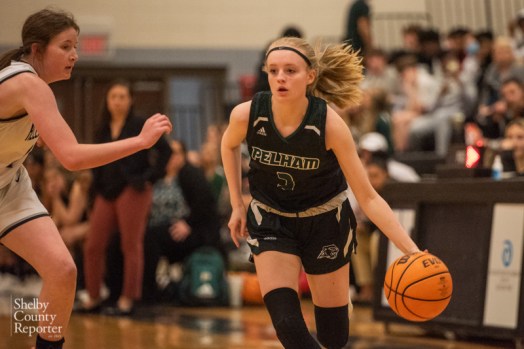 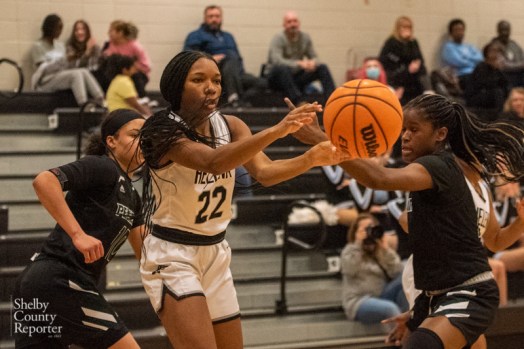 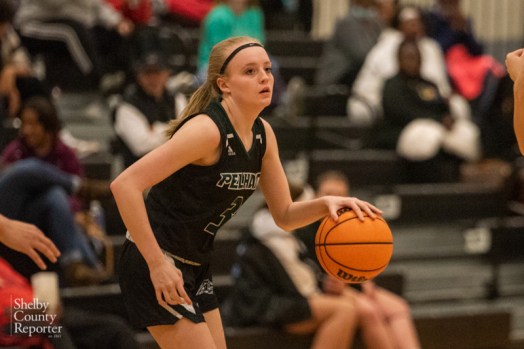 HELENA – With five minutes left and rival Helena making its push, the Pelham Panthers put together a stretch of play that locked up the regular-season title and hosting rights for the area tournament.

In a road matchup with the Huskies on Tuesday, Jan. 25, the Panthers watched as Helena trimmed a once six-point deficit down to single digits with five minutes to play.

The Panthers, however responded with a basket and then the play that seemed to seal it.

With 4:45 to play, Laci Gogan drove inside the three-point line, kicked it to Victoria West, who then bounced a pass under the goal to Myriah Tate who laid it in for a 43-30 lead with 4:35 to play.

Pelham then added one more on a Jaslyn Heflin offensive put back for a quick 6-0 run that extended the lead back to 15 following a very quick 6-0 run.

In a game that was defensive for the most part, that became the final straw in a 47-35 win for the Panthers, who improved to 5-0 in area play.

Pelham had a balanced effort in the win with 13 points from Gogan, 12 from Tate and 10 from West to help pick up the victory.

It was the Huskies, however, who started fast.

Helena’s defense helped spark a fast start for the Huskies in the opening quarter, jumping out to a 10-4 lead behind four made free throws and two 3-pointers from Alana Scott.

Pelham, however, responded in a big way.

The Panthers not only ended the first quarter on a 6-0 run to tie the game, but carried that into the second quarter, eventually extending the run to 20-1.

Pelham capitalized on a full-court press that led to several turnovers and a 9-0 run to start the period.

Helena’s Olivia Johnigan stopped the run with a free throw, but Pelham eventually took a 27-13 lead.

The Huskies, however, were able to battle back to within 10 points behind another free throw from Johnigan and a 3-pointer from Scott near the end of the quarter to make it 27-17 at the break.

Scott ended up with 11 of Helena’s 17 in the opening half of the game, while Pelham got three or more from five different players in a balanced attack.

Pelham’s defense then got the job done out of the break.

The Panthers jumped out to a 35-19 early in the third quarter, extending their advantage to a game-high 16 points.

Helena answered with an and-1 from Johnigan to trim it back to 13 points, and the defense of the Huskies picked up from there trying to fight back.

Pelham struggled to find good looks the rest of the quarter, but the Panthers also continued playing lockdown defense.

The Huskies didn’t score the rest of the half, while Pelham added one more basket on an inbound turnover from Helena to make it 37-22 going to the final quarter.

That’s when Helena, who was shorthanded on the night, put together a final push early in the fourth.

The Huskies started the final quarter on an 8-2 run to get within nine points at 39-30.

With more than five minutes to play, there was still plenty of time to complete a comeback.

Pelham, however, responded with another clutch defensive stretch to prevent that from happening and preserve the win thanks to the late 6-0 run.

Scott led all scorers, totaling 20 points in the loss, while Johnigan chipped in 10 points.