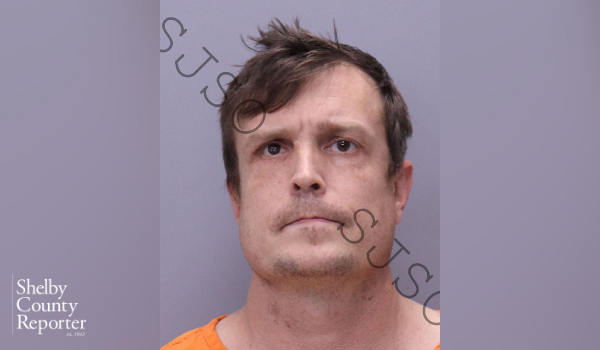 John Peyton Scott III was arrested in St. Johns County in St. Augustin Florida yesterday afternoon, Jan. 24. Scott is a person of interest in a double homicide that occurred on Wednesday, Jan. 19. (Contributed)

“John Peyton Scott III was taken into custody yesterday by deputies with the St. Johns County Florida Sheriff’s office,” Flynn said. “He is currently being held in St. Johns County under no bond.”

Scott appeared in front of a Florida judge this morning and requested he be able to speak with an attorney prior to him deciding on whether he will fight or waive extradition back to Alabama.

“Shelby County Major Crimes Task Force detectives and crime scene investigators are currently in St. Augustine and working alongside St. Johns County detectives to process the vehicle Mr. Scott was driving when he was arrested as well as other investigative and evidentiary responsibilities, and to monitor the progress of the extradition progress,” Flynn said.

Flynn offered his sincerest gratitude and thanks to Sheriff Robert Hardwick of the St. Johns County Sheriff’s Office, as well as to the men and women on Hardwick’s team for their assistance in the investigation.

“Mr. Scott’s arrest came as a result of good old fashioned police work by St. Johns County deputies,” he said. “The Shelby County Major Crimes Task Force has been in communication with numerous law enforcement agencies in Florida, including St. Johns, over the past five days in reference to the whereabouts of Mr. Scott. Those communications were vital to provide Florida law enforcement with the information they needed to facilitate this arrest.”

Flynn also expressed thanks to the Major Crimes Task Force members and the assistance of District Attorney Jill Lee.

“Law enforcement in Shelby County is a team effort, and I as well as my team are proud to be a part of such a dedicated and professional group,” he said.

Lastly, Flynn offered his condolences to the families of the victims.

“Lastly, to the families of Mr. Tarwater and Miss Whited, we cannot begin to understand the grief you feel at the loss of your loved ones,” he said. “I hope the news of this arrest will bring you some small semblance of peace during this terrible time. Your family were valued members of our community, and their loss is felt throughout our city. We will be there for you today, tomorrow and every day until you see justice is served.”

The St. Johns County Sheriff’s Office said they were on high alert Monday when they were made aware that Scott may be traveling in the area.

They began looking for his red Ford EcoSport when it was spotted around 2:30 p.m. near a Buc-ee’s off Interstate 95 in St. Augustine about to get back on the interstate.

After running the plates, the SJCSO knew it was the right car and attempted to pull him over. He originally didn’t stop, but the officers in pursuit performed a PIT maneuver, which caused him to lose control of the vehicle, leading to him surrendering to officers.

“The proactive mission to find this vehicle and Mr. Scott led them to locating him and after a brief pursuit taking him into custody,” Flynn said. “I have reached out to Sheriff Hardwick this morning personally to thank him on behalf of our community and the families of the victims. I would also like to thank the United States Marshals Gulf Coast Fugitive Task Force for their assistance in the search for Mr. Scott over the past several days. They played a large role in locating him and we thank them for their efforts in aiding our investigation.”

When asked if he could reveal the potential motive behind the crimes, Flynn said since they were not able to sit down with Scott like they had hoped to, they did not have any idea as to why the crimes occurred.

“We can only speculate right now,” Flynn said. “One of the things I would like to know is why. What would cause an individual to do something like this.”

Flynn said if Scott were to want to talk with HPD, they would absolutely be open to the opportunity.

“If he wants an attorney and he won’t talk, or he wants to have an attorney present, we’ll facilitate that, but ultimately we just want to talk with him period,” Flynn said.

Flynn said he was in the middle of having lunch with his wife and some friends when he received the call that Scott’s vehicle was in pursuit.

“My heart rate picked up significantly, I can tell you that,” he said. “We got the call the vehicle had been stopped and they were waiting to make a positive identification that it was him driving, and those three or four minutes felt like three or four hours until I got verification it was in fact him and they had taken him into custody safely. It was a huge relief knowing the community will sleep better knowing he’s off the streets, and it gave me a sense of professional satisfaction that I haven’t had in quite a long time to be able to know that thanks to the hard work of our detectives and the Task Force detectives, we were able to take him into custody in five days.”

Flynn placed specific emphasis on how thankful they are to the community for their support in the investigation.

“We’re very thankful for the support of the community,” he said. “We received such a huge outpouring of support not just from the community, but them calling in with tips, calling with ways they want to help the family. That’s what makes me proud to live here and be part of this community. Even in the darkest times with something like this, our community rallies around each other.”

On Wednesday afternoon, Jan. 19, the two Helena residents were found in a home located at the 100 block of Piney Woods Drive in the Riverwoods neighborhood.

“This riled everybody to the core,” Flynn said. “Something like this doesn’t happen anywhere, especially in a community, like this. It’s terrible that this happened but we’re going to work nonstop 24/7, 365 until we can bring the individual responsible to justice and let the family know that we’ve done everything in our power to hold them accountable and to let our community know it’s still a safe community and we’re going to fight to keep it that way.”