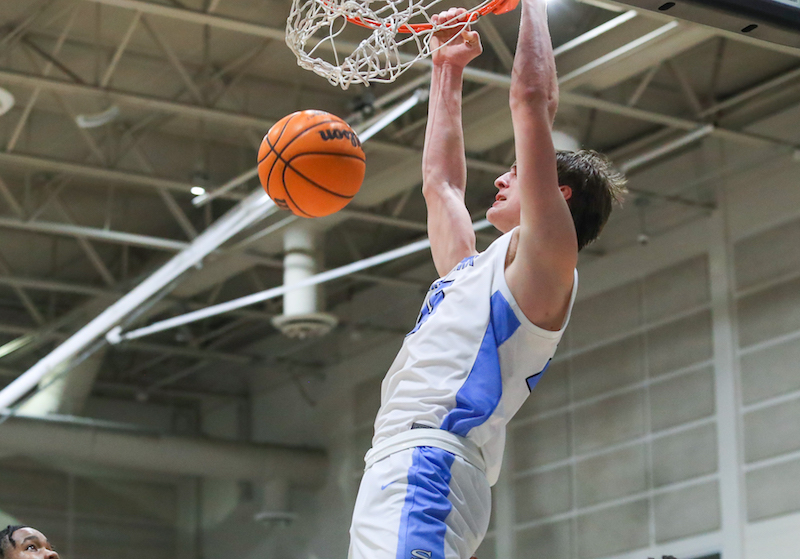 HOOVER – Following a tough three-game stretch with starters in and out of the lineup, the Spain Park Jaguars bounced back in a big way on Tuesday, Jan. 25 back home.

Taking on Hewitt-Trussville at home, the Jags put together a dominant showing for their third area win of the season, beating the Huskies 67-35 to regain some confidence late in the season.

Celebrating senior night, Spain Park flew out of the gate in the opening quarter to set the tone.

It led to their first of two 20-plus point quarters, as the Jaguars scored 22 points in the opening frame, while limiting Hewitt-Trussville to 12 points.

Spain Park quickly turned the game into a 3-point shooting barrage in the second quarter, as several players, including Zach Gray, who is making a return from injury, Josh Harrington and Korbin Long.

With their hot touch in the first half and strong post play from Colin Turner, the Jags were able to open a more than 20-point lead at 41-17 going into the halftime break.

Out of the half, Spain Park didn’t slow up.

Several players continued to chip in during the third quarter, as the Jaguars totaled 23 points and limited the Huskies to 12 for their best period of the game.

That helped Spain Park carry a 64-29 lead into the final quarter, which came and went in a hurry due to the 30-plus point advantage leading to hot clock.

The Jags added three more in the final quarter, while the Huskies posted six, creating the 67-35 final score.

Spain Park got 17 points from Turner in the win, while Harrington also finished in double figures with 14. Chase James and Jared Smith also had strong nights in a balanced effort with eight points each.