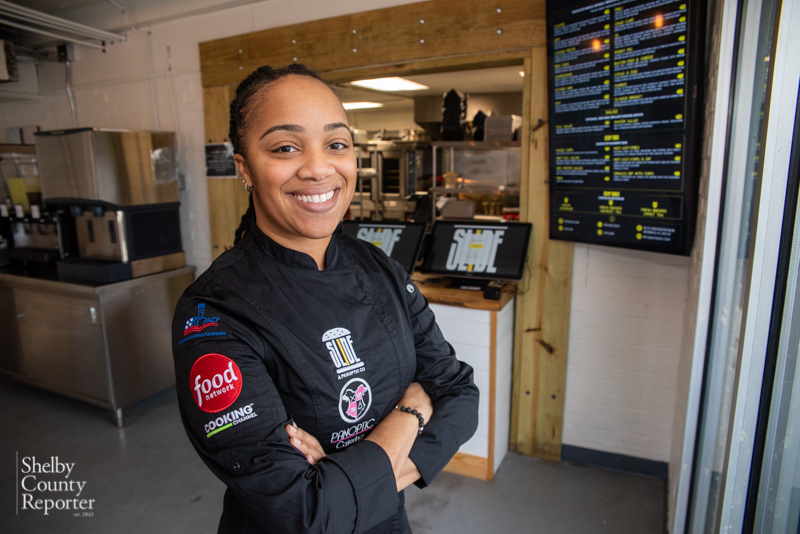 Chef Raquel Ervin is preparing to bring the second location of her hit restaurant Slide to Pelham’s Campus 124 business district. The restaurant is set to open summer 2022. (Reporter Photo/Keith McCoy)

PELHAM – Chef Raquel Ervin has always had a fire for cooking, no pun intended. It’s that fire that’s driven her throughout her entire career and led her to her latest achievement of opening a new restaurant in Pelham.

Ervin is set to open the second location of her restaurant Slide in summer 2022, the menu of which consists of inventive and diverse plays on slider burgers with some salads and gourmet sides.

The restaurant is expected to take over an open spot in Pelham’s Campus 124 business division.

Ervin first set foot on the culinary scene in Birmingham back in 2014. In that time, she’s opened her Panoptic Catering business, started a food truck, appeared on three cooking competition television shows (including a very recent appearance on Food Network’s Chopped), and opened the Irondale location of Slide, and she said it’s both liberating and exciting to see her passion and dreams come to fruition.

“When you’re passionate about what you do, you don’t see it as many projects, you see it as just what you have to do,” Ervin said. “However, I’m very organized and have learned after years of being nose down that balance is also important. So, to some, this would be overwhelming, but it really does come natural for me to have my hands in many things at the same time.”

Slide’s Irondale location opened May 21 and has become a hit amongst Irondale residents. Ervin said she wanted her first location to be a more intimate atmosphere, and she chose Irondale and Pelham as her locations because of their fast growing business infrastructure.

“Pelham was chosen for a few reasons,” she said. “Pelham is another quickly growing area that I felt could benefit from more local restaurants. I also look at areas where my menu can stand out.”

Ervin started her catering company in 2014 while she was living in Shelby County, and she said she was able to build a solid customer base where she estimates roughly 85 percent of that base came from Shelby County. Though she wasn’t able to set up her first restaurant in Shelby County, she said having her food truck allowed her to travel in between Jefferson and Shelby Counties, setting the stage for her future plans.

Ervin entered the year 2020 with a full calendar and high hopes for building on her dreams and culinary prowess. When the pandemic hit in March, she found she was being pushed in a very different direction. She lost 47 catering events in spring 2020, and at the same time she was in the process of signing for a building for her restaurant – a process that ultimately fell through due to the shutdown.

“I was very discouraged and completely stopped my search,” she said. “I was reminded that ‘Rome was not built overnight’ and rested on something that I always say, ‘All things happen for a reason,’ and that has kept me grounded yet flexible.”

Ervin shifted her focus onto starting her food truck, which would ultimately become her brick-and-mortar restaurant.

Ervin said while she has definitely met challenges along the way, she refuses to stop pushing forward.

Since its opening, the Irondale Slide has increased its menu with 15 specialty sliders, two salads, five gourmet sides and several new beverage options including house-made lemonade.

“I am most excited about expanding in size to allow my creativity and archives of specialty sliders, gourmet sides and signature salads to illuminate,” Ervin said. “The Pelham location, which will open this summer, will offer twice the menu items as our Irondale location featuring 23-plus specialty sliders, four signature salads, six gourmet sides, a kid’s menu and dessert options.”

Ervin said she wants to be known for causing “food smiles” and for creating food with flavor in every bite.

“What I love most about being a chef is it truly allows me to be myself,” she said. “I have always been a very artistic, creative and sharp individual. A few of my hobbies are painting, drawing and photography. Being a chef allows me to exercise those gifts by creating food art and photographing food.”