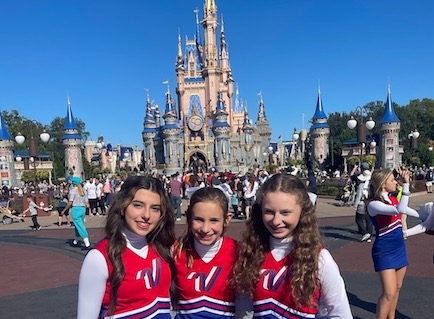 Helena Middle Schoolers Izzy Nichols, Gianna Pascquale and Britton Tucker performed in the All American Cheer Parade at Disney World this past November. The girls were able to participate with other cheerleaders and dancers from all over the United States. (Contributed)

HELENA – Three Helena Middle Schoolers got the chance of a lifetime in the happiest place on Earth this past November.

Eighth graders Izzy Nichols, Gianna Pascquale and Britton Tucker were picked to perform in the All American Cheer Thanksgiving Parade at Disney World. The three girls were able to perform a cheer and dance routine for thousands of people in the Magic Kingdom after successfully trying out for All American Cheerleading at their Universal Cheer Association Camp.

The parade is a huge milestone for cheerleaders and dancers across the United States as girls are picked from all across the country to participate and represent their home state.

“It was really, really cool,” said Bobbie Nichols, Izzy’s mother. “From my perspective, it was really emotional to see her participate in the parade.”

The parade was split into two days due to the large number of girls participating. The girls were divided up into teams and set on a specific practicing schedule that Nichols admits was a little overwhelming at first.

“You get down there on Tuesday, you have a team dinner that night so everybody on your team has dinner together, then you have a three-hour practice,” she said. “All the girls are given the material by video so they have to practice on their own. Then once they get there, they’re placed in order with the other girls from the other states and then they practice together.”

The girls were determined to work hard, and their dedication ultimately paid off. Nichols said it was obvious how excited they were the entire time.

“For my daughter, it was just a lifetime experience,” she said. “She met girls from all over the United States, and she made new friends and exchanged Snapchats and emails and Instagrams. She made amazing friends that she may go to college with someday.”

The three girls were even able to give a piece of Helena to their new friends.

“They did this thing called a T-shirt swap, and it’s where each girl brings a shirt from where they’re from, like our girls brought Helena Husky T-shirts, and you swap it with another girl on your team,” Nichols said. “She got one from Arizona, and I just thought that was so cool.”

After participating in such a high caliber parade, Nichols said the girls’ aspirations have only grown. They’re hoping to participate in more parades at each growing level, and according to Nichols, the parades get bigger as the girls get older. One parade is even located in Hawaii.

She said having these opportunities to make priceless memories is something she will always cherish for her daughter.

“Seeing all the girls coming together was so special,” Nichols said. “Everyone was so nice and so encouraging. You weren’t competing against each other, like, the girls that didn’t participate that day came and cheered the other girls on. It was just the perfect example of sportsmanship, and Izzy was so happy.”