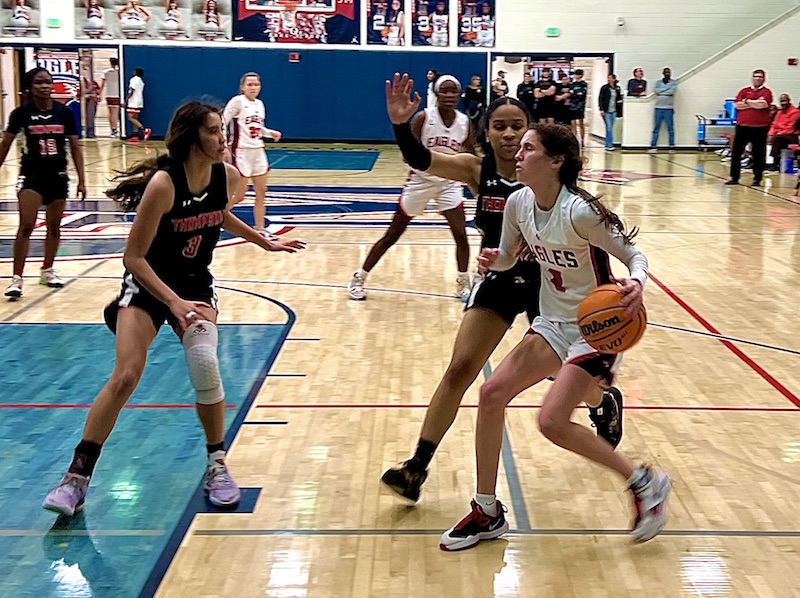 NORTH SHELBY – A second-quarter run helped the Oak Mountain Eagles get redemption on their home floor on Friday night, Jan. 28.

Hosting the Thompson Warriors, the Eagles used 26-point second period to create some separation going into the half and they never looked back from there, eventually winning 69-52.

With the win, Oak Mountain avenged a 36-33 loss to the Warriors on the road two weeks earlier and improved to 3-3 in area play.

That also brought an end to area play with both teams even at 3-3 heading into the area tournament, as they’ll face each other in the first round to determine who advances to the Sweet 16.

In a half that ended up being swung in one direction, the first quarter actually started as a tight battle.

Oak Mountain started strong from beyond the arc with three 3-pointers, while the Eagles also got an additional field goal from Raegan Whitaker and two free throws from Abby Gordon to total 13 points.

Thompson, however, knocked down three from beyond the arc as well, matching the Eagles in that regard.

The Warriors, however, missed two free throws, which ultimately led to a two-point deficit going to the second quarter.

But it was the second quarter that was costly for Thompson.

Whitaker in particular caught fire. After scoring five in the opening quarter, she came out and knocked down two 3-pointers in the second quarter, while also adding seven free throws.

That helped her total 13 points in the quarter alone and 18 for the first half.

Oak Mountain also got 3-pointers from Gordon and Tamia Threatt to play a role in a 26-point quarter offensively.

The defense also limited the Warriors to single digits at eight points. Thompson made two field goals and went 4-8 from the free throw line in the period, which wasn’t enough to prevent Oak Mountain from taking command going into the half behind a 20-point lead of 39-19.

Thompson did make adjustments at the half and came out with a more spirited effort, but the Warriors were forced into an uphill climb following the second quarter.

Oak Mountain eventually extended the lead to its largest of the game at 53-30, but the Warriors were able to end the third quarter on a 4-0 run to cut the deficit to 19 going to the final quarter.

Looking to overcome a large deficit, the Warriors started the quarter on an 11-2 run to get within 10 points with 3:58 to play.

Within 10, however, was as close as they could get.

The Eagles got 26 points from Whitaker to lead the way, while Lauren Schuessler and Abby Gordon also finished in double figures with 13 and 11, respectively.

Thompson was led by Alecia Reasor with 12 points, while Terin Haynes finished just behind with 11.