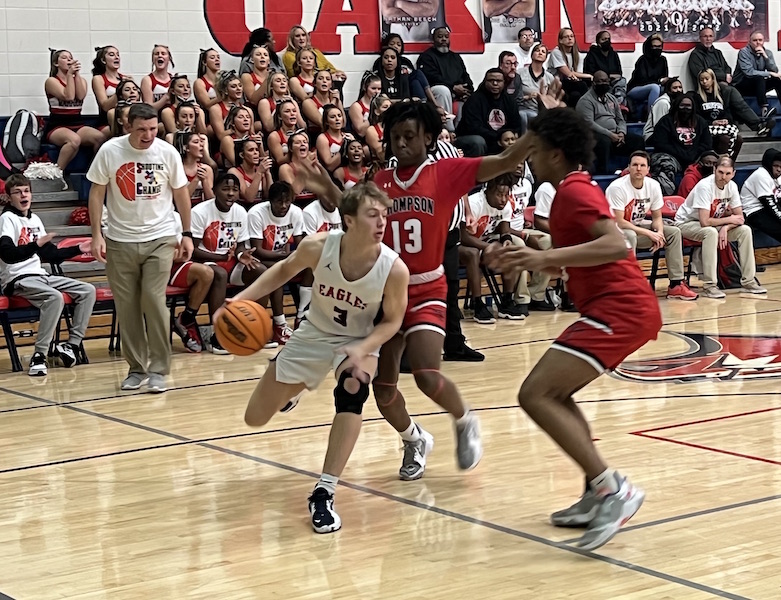 Oak Mountain pulled away for an 18-point victory against Thompson on Friday, Jan. 28 to earn the No. 1 seed in the area tournament. (Reporter photo/Alec Etheredge)

NORTH SHELBY – With the host sight of the area tournament and the top seed on the line on Friday, Jan. 28, the Oak Mountain Eagles knew a win was needed entering a matchup with county rival Thompson on their home floor.

Trailing just twice in the first five minutes of the game, Oak Mountain took control at the end of the first quarter and never looked back en route to a 67-49.

The Eagles improved to 4-2 with the win, which tied with Hoover, but with a higher winning percentage against the Warriors—the third-seed team—Oak Mountain earned hosting rights and the top seed going into the area tournament.

Big nights from both Wilder Evers and Ryan Giegel were big reasons why as well with Evers totaling 19 to lead all scorers and Geigel finishing one point behind with 18.

Both had a big first half, with Evers starting it in the opening quarter and Giegel closing it out in the second quarter.

The opening quarter featured runs from both teams, which led to five lead changes in the first few minutes.

Oak Mountain jumped out to an 8-4 advantage following made shots from Matthew Heiberger and Evan Smith in addition to three free throws from Wilder Evers.

Thompson responded with five consecutive points from Gonzalez to give the Warriors the lead at 9-8.

Oak Mountain, however, ended the opening quarter on an 8-1 run off a dunk from Gavin Nelson, a 3-pointer from Ean Gove and an and-1 from Evers.

Then, the Warriors found another answer with a 9-2 run to draw back within six points at 25-19.

That, however, followed by the biggest stretch of the half as Oak Mountain ended the quarter on a 12-0 run to take command with a 37-19 lead going into the half.

Giegel totaled 10 points in the quarter, which were big in helping extend the lead, while Evers added five more to his first-half total, giving him 11 at the half.

And to start the second half, it was more of the same.

The Eagles came out firing with a quick 6-3 spurt to extend the lead to its largest of the game at 21.

Thompson never got closer than 18 the rest of the quarter, as Oak Mountain took a 51-28 lead into the final quarter.

The Eagles then continued to pull away, taking a 65-36 lead before pulling the starters with 2:30 to play.

Oak Mountain made 20 free throws in the win, including seven down the stretch.

Behind the two leading scorers, Brady Dunn and Smith each finished with seven, while Heiberger added six.

Thompson got 12 from Jay Green in the loss, while Wesley Roberson added 10.