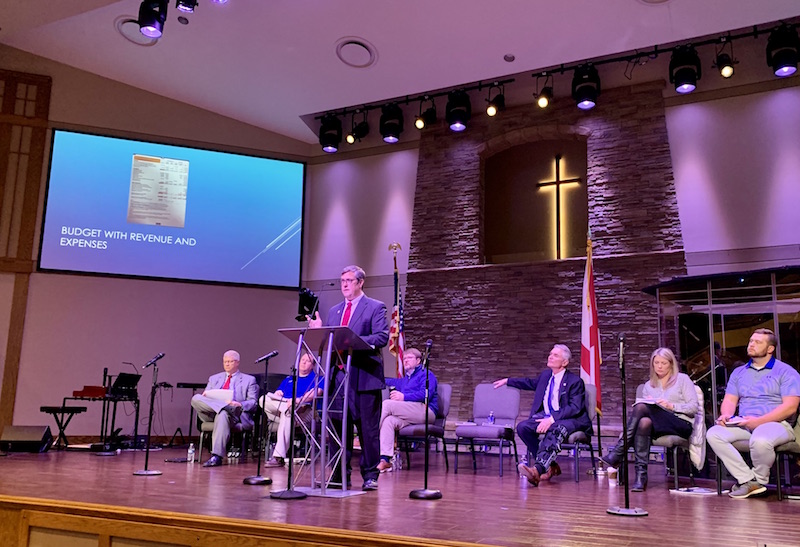 Chelsea City Councilmember Scott Weygand speaks to attendees of a public hearing about the city’s consideration of options for forming an independent school system on Thursday, Jan. 27. (Reporter Photo/Emily Sparacino)

Chelsea City Council members and more than 20 residents spoke during the hearing, which was also livestreamed on the city’s Facebook page.

The hearing was another step in gathering public feedback about whether the formation of a municipal school system would be a viable option for Chelsea to address school facility issues, and how a school system—and any facility improvements or construction—could be funded.

“There won’t be any decisions or votes tonight,” Chelsea Public Information Officer Wayne Morris said in his opening remarks. “Hopefully, our conversation will lead to a greater understanding about the issue and what direction the city should take. Ultimately, this decision will rest in the hands of the citizens of the city; all of us will be the ones who will have the opportunity to vote and make that decision.”

Those who spoke shared comments and questions about the idea of Chelsea breaking away from Shelby County Schools to form an independent school system, as well as how they felt about a city property tax to fund a school system and school upgrades or new construction.

The full video from the public hearing is available on the City of Chelsea, Alabama Facebook page.

Mayor Tony Picklesimer and City Council members shared their personal opinions on the issue, a frequent topic of conversation over the past year, especially after the city received and shared the results of a school system feasibility study conducted by Criterion K-12 Consulting last year.

“As a private citizen, as a grandfather, as one vote, it has been my desire from the very outset of this endeavor to try to find a way to build a new high school and to offer better facilities to the students that attend Chelsea schools,” he said. “My original intent was to include all areas, include all 4,500 students, but citizens of some of those areas made it very plain that they did not want to be involved in this, and I understand that.”

Picklesimer said although he was in favor of 30 mills of property tax to enable the city to build a new high school, his job as mayor was to represent the citizens’ preferences.

“It’s my job to put forth what you would like to see happen,” he said. “Ultimately, this will come down to a decision of the voters of the city of Chelsea, as it should be. We are the ones being asked to pay the price, so we ought to have a vote as to whether or not this project moves forward.”

Picklesimer listed the four options under consideration regarding the formation of a city school system:

Councilmember Chris Grace said to do nothing about Chelsea’s schools would be irresponsible.

“Since my family moved to Chelsea in 2003, our area has received the addition of three elementary schools, and I’m including Mt Laurel in that, and we’ve received renovations to the middle school and additions to the high school,” Grace said. “However, our population growth has outpaced those improvements.”

Grace stressed the discussion is not about a lack of quality education offered at the schools, but simply about critically needed facility improvements.

“Any solution that we come to will require higher taxes, and we have to pay those,” he said. “As we continue to grow, and we will, and if we want to maintain the high quality of life that we have, other needs will arise and those needs will also require public funding. We’ve got to balance our known needs today with our unknown needs of tomorrow.”

Councilmember Tiffany Bittner said now is the time to do something for the city’s schools, where overcrowding and outdated facilities are significant problems.

“Now is the time for us to take a step forward for our community, to bring the educational experience to the next level for our kids,” she said. “We’re not ready to compete at a 7A level based on our facilities. It’s not easy making hard decisions or decisions that you feel like cause strife and dissention within the community, but it’s also best to make a decision for our future and our kids.”

Councilmember and Mayor Pro Tem Scott Weygand talked about how each option would be implemented regarding funding from tax millage.

Weygand said Option 2, which calls for 11 mills of property tax, would allow Chelsea to fund a school system with a state-required operating reserve.

He said the 20-mill option would fund the required reserve fund and address the facility issues faster.

“There’s only one way that we can guarantee that the tax money we’re all paying to the school system stays in our local schools,” Weygand said. “This is the opportunity for us to make your tax dollars go further, operate the system more efficiently and reduce the overcrowding at the schools.”

Amber Polk said Chelsea’s deficit in sales tax revenue compared to nearby cities with their own school systems would be problematic.

“I agree that we need new facilities,” she said, “But I just don’t think that Chelsea can afford to split and form their own school system. I think the question we need to be asking here is do we want a new school system or do we want improved facilities, because those are two different issues.”

Angie Moreland said she is not a proponent of Chelsea forming a separate school system.

“My children have gotten the best education in Shelby County,” she said. “I know that the buildings need improvements, and I’m all for that, but I am not for breaking away from Shelby County. I think that spending the money to break away could be directed straight to the facilities, where everyone says that is the issue.”

Amanda Mundy said she had concerns about how forming a city school system could affect local teachers and the city’s finances, particularly during the pandemic.

“I see these options, but I believe there are probably other options that maybe we haven’t seen,” she said. “I would like to see more about what the county has to say. I think raising taxes may hurt us in the long run, right now.”

Richard Wilbanks said he is not opposed to a higher sales tax to help schools, but he is opposed to a “forced tax” rather than a “choice tax.”

Andrew Hudspeath said he is for a city school system in Chelsea.

“I firmly believe that the benefits exceed the costs, and it’s a good thing for our city and our children,” he said. “Shelby County has done a great job in what they have provided Chelsea from an education standpoint, but they’ve maxed out their capabilities.”

Joe Frost said he is against raising property taxes but suggested continuing efforts to secure more funding from the Shelby County Board of Education.

“I stand firmly that Shelby County can do more for the fastest-growing city in the county,” he said.

“I was excited to see the possibilities of what a city school system could offer our community and my own children, and after seeing the feasibility study and hearing some options, all I see right now at this point is a bunch of division,” Lee said. “From a taxation standpoint, I don’t think the city can afford this right now as it is.”

Brandon Jones also said he does not think a tax increase is the best solution.

“There are other ways to find the money that we need,” Jones said. “My suggestion as a small business owner is just simply find more creative ways to incentivize larger businesses to move into the city. The larger businesses will pull more people, thus growing the population and increase overall revenue.”