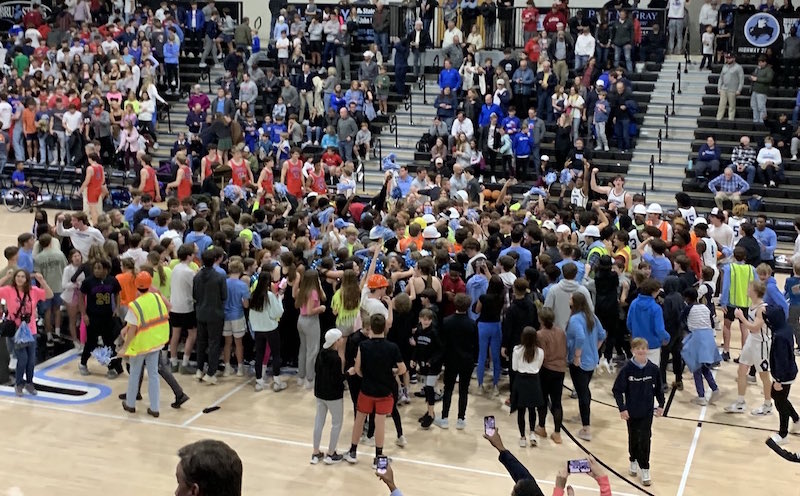 HOOVER – After giving up a seven-point lead in the final 40 seconds of a top-10 battle with No. 2 Vestavia Hills on Friday, Jan. 28, the Spain Park Jaguars had to bounce back quickly in overtime.

Losing momentum at the end of regulation, the Jaguars didn’t let it get them down, as Colin Turner started overtime with two layups to put them right back in front at 71-69 with 50 seconds to play.

This time, they didn’t let the lead slip away, as the Jags made two of four from the free throw line in the final 20 seconds to close out a 73-71 victory and send the students in attendance into a frenzy as they rushed the floor in celebration.

The victory redeemed a 71-50 loss to the Rebels on Jan. 14 in a game the Jags were within a few points of the lead until the final quarter.

This time around, however, it was Spain Park who led the majority of the game and was able to close out the area win to finish area play 4-2 heading into the area tournament as the two seed behind the Rebels.

In a compelling game, it was the Jaguars who claimed the early lead at the end of the first quarter. In a period that saw several lead changes, the Jags were able to grab a one-point advantage of 18-17 following a high-scoring frame.

The Jags then took advantage of that little bit of momentum by starting the second quarter with a quick 5-0 run in the first 40 seconds off a Turner dunk and Sam Wright 3-pointer.

That put Spain Park on top 23-17, but the Rebels bounced back quickly, leading to a back-and-forth rest of the quarter that saw each team score 13 points, giving the Jaguars a 31-30 lead at the break.

With the lead at the half, the Jags gained the confidence that they could pick up the win, and it showed in the third quarter.

They came out of the locker room and poured in 20 third-quarter points for their best period of the game.

In addition to that, the Rebels were limited to 14 points, which allowed the Jags to take their largest lead of seven points in to the final quarter of the game.

Spain Park held around a six- to seven-point lead throughout the final quarter, eventually making it 66-59 with 39 seconds left.

The Rebels, however, responded in crunch time with a clutch and very quick 8-1 run to even the game at 67-67 and force overtime.

But two big layups from Turner quickly gave Spain Park the lead back at 71-69, and this time, the Jags were able to make two free throws and prevent a final shot to cement the victory.

Spain Park had five players finish in double figures, led by Turner and Wright with 17 each. Behind that, Chase James totaled 14 points, while Josh Harrington and Zach Gray finished with 12 and 10, respectively.