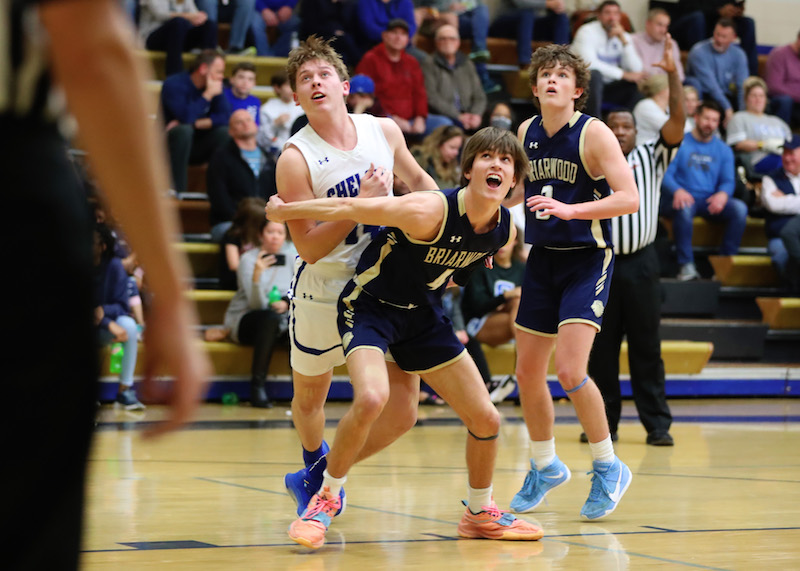 Briarwood pulled off a thrilling two-point area victory against Chelsea on Friday, Jan. 28 thanks to a huge third quarter. (For the Reporter/Cari Dean)

NORTH SHELBY – The Briarwood Lions scored 22 points in the third quarter to overcome a three-point deficit at the half and eventually earn a thrilling two-point victory against rival Chelsea on Friday night, Jan. 28.

Taking on the Hornets on their home floor, the Lions outscored Chelsea by 10 in the third quarter to take a seven-point lead into the final quarter, before they were forced to fend off a final push from the visitors en route to a 47-45 victory.

The ending was just part of a compelling game that started with Chelsea in front at the end of the first two quarters.

The Hornets opened the game with two 3-pointers from Avery Futch and a combined five points from Aiden Owens and Carson Camper.

The 11 points between those three players was enough for an early lead, but only by one point.

Briarwood also got two 3-pointers in the opening quarter, one each from Miles Gilbert and Zac Lamey, to help keep pace. Those two were joined by one field goal each from Baylor Gann and Luke Schultz to set up an 11-10 Chelsea lead going to the second quarter.

The Lions added that one extra point in the second quarter, totaling 11, but Chelsea responded with 13 thanks to a big quarter from Futch.

The sophomore made four of his six free throws in the quarter and added a field goa for six more points, bringing his first-half total to 12 points.

The Hornets also added a 3-pointer from Camper and two more field goals from Dylan Brown and Cooper Griffin.

With that, they extended their lead to three points at 24-21 going into the half.

Briarwood, however, took advantage of the halftime break and completely flipped the script in the third quarter.

The Lions came out and caught fire in the period, knocking down nine shots, including three from beyond the arc.

That helped play a major role in a 22-point quarter from Briarwood, while the Lions gave up 12 points defensively to erase the deficit and take a 43-36 lead into the final quarter.

But thanks to six points from Redd and six made free throws in the third quarter as a team, Chelsea remained within striking distance.

The Hornets turned up the defensive pressure, which shut down Briarwood’s offense to four points in the final quarter.

Chelsea fought back with nine points in the quarter, but two missed free throws ended up being costly, as the Lions did just enough to hold on for a thrilling 47-45 victory.

Gilbert led the way for Briarwood with 12 points, while Lamey scored nine on his three made 3-pointers. The Lions ended the game with eight players scoring, while they hit six total from beyond the arc.

Chelsea was led by Futch with 17, 12 of which came in the first half. Redd finished with nine, while Camper added seven points.