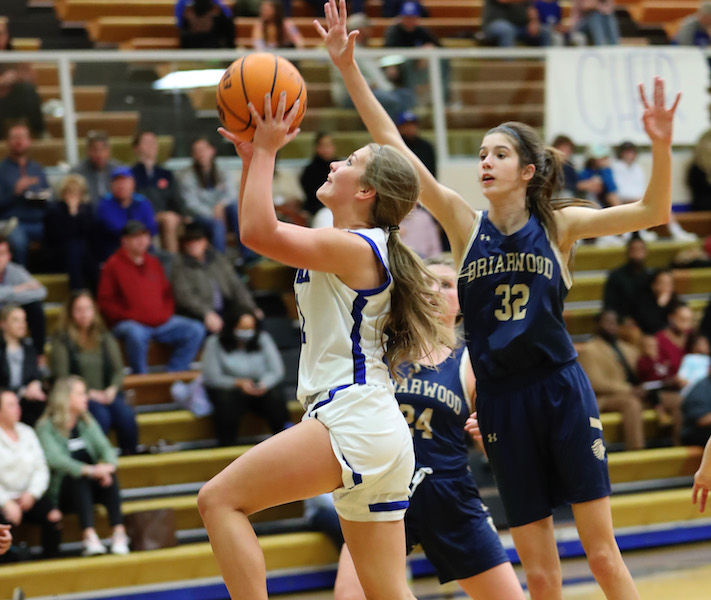 Sydney Schwallie joined the 1,000-point club with 12 points in a 44-31 victory against rival Briarwood on Jan. 28. (For the Reporter/Cari Dean)

NORTH SHELBY – It was a special night for the Chelsea Hornets on Friday, Jan. 28, as they not only finished area play a perfect 6-0, but did so on the road against rival Briarwood, while one of their senior leaders surpassed 1,000 career points.

Sydney Schwallie scored 12 points, including four clutch free throws in the final quarter, to reach the historic milestone for the Hornets and help them pick up a 44-31 victory.

It also marked the 20th win of the season for the Hornets, as they were able to score 17 points in the final quarter to take an otherwise tight game and turn it into a 13-point road victory.

In the opening quarter, Chelsea struggled overall from the field, but two 3-pointers from Mary Cartee, four points from Lexi Redd and two free throws from Haley Trotter helped the Hornets total 12 points.

With a defense that didn’t give up double digits in any quarter of the game, that was enough for the early lead, as the Lions totaled eight points from two players.

Despite the offensive struggles for Briarwood, Chelsea struggled to take advantage with the Lions also playing solid defensively.

In the second quarter, that actually helped the Lions outscore the Hornets 8-7 to cut into the deficit at the half.

Briarwood still trailed 19-16 at the break, but the Lions were still right in the game, even with Chelsea’s strong defense.

Following the halftime break, both continued to focus on the defensive effort in the third quarter, trying to avoid playing themselves out of it on the offensive end.

That led to the lowest-scoring quarter between the two.

Chelsea, however, got a huge 3-pointer from Schwallie in the quarter that helped the Hornets take a 27-22 lead into the final quarter, rather than a 24-22 lead.

Playing with that five-point cushion seemed to give Chelsea the confidence it needed in the final quarter.

He Hornets put together their best quarter of the game by a longshot thanks to 17 points, including a 4-4 mark from the line for Schwallie, five points each from Nia Cummings and Cartee, as well as three points from Redd.

With the defense limiting Briarwood to nine in the final quarter, that spurt from the offense became the final straw in pulling away for the win.

Cartee led the Hornes with 14 points in the victory, while Schwallie finished just behind with 12. Redd added nine points, finshing just shy of double figures.