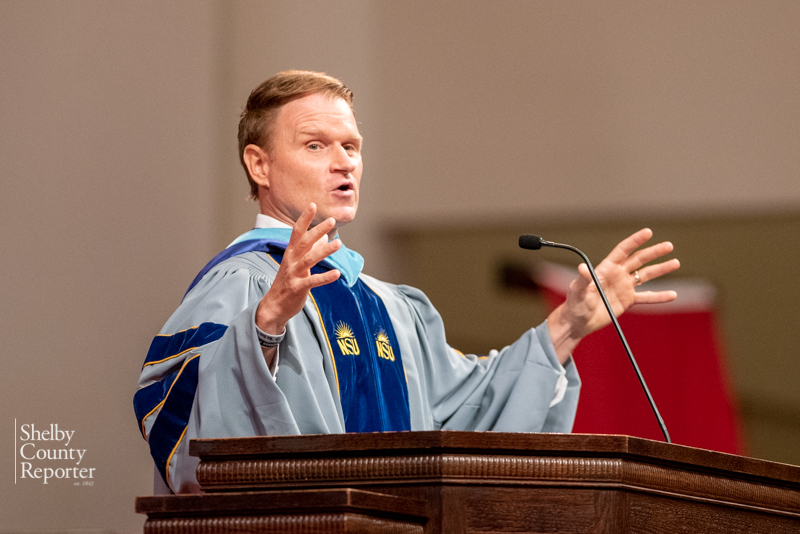 Briarwood Upper School Principal Shawn Brower shared a letter with parents on Sunday, Jan. 30 in response to his contract not being renewed, while the school followed with an apology. (File)

Official word came down from the church on Saturday afternoon that Brower’s contract had not been renewed for the 2022-2023 school year in a letter from the church’s Transition Team.

Since then, an apology has been shared by Jim Alexander, Briarwood’s pastor of board directed ministries.

In the original letter to parents, it was shared that Brower had not been fired or placed under a “gag order,” but that he was informed at the earliest stage possible he would not be offered a contract for the 2022-23 academic year.

The letter said the decision was made with full knowledge that Brower had not returned his form indicating he intended to return to Briarwood for the next year.

On Sunday, however, Brower shared a statement with the Briarwood family, saying it came as a surprise to him on Jan. 25, as he had every intention of returning to Briarwood, based on his timely response of his intent to return form.

“A lot has transpired this past week and it is time for me to give you my response,” Brower started his letter. “What I want to be perfectly clear from the beginning is that I love Briarwood Christian School in a way that I can’t fully describe. Those who know me—you get it!”

Brower said even though he planned to return, the decision has been made, and he is saddened by the outcome.

“I thank those in the school and in the community that have shown their support for me and my family,” Brower wrote. “I know many of you have signed petitions, gathered together, sent letters, etc. I am overwhelmed by the love and support! However, at this time, the Lord has seen fit to lead in a different direction. God is good—always. The school and organization of Briarwood is far bigger than any one person. It has been an honor and a blessing to have been part of it for nearly seven years. As noted above, the most important thing in all of this is that God is glorified. It is not about me. I want the best for the BCS community, the faculty, and the staff. I want the school to flourish and the students to continue to learn what it means to be courageous disciples of Christ! This is an eternal perspective that must be ever before us.”

Following the meeting and Brower’s statement, Alexander sent another letter, this time apologizing for the inaccurate information.

According to the letter, it was admitted that Brower’s form was received, claiming that technological issues were to blame.

“We extend our sincere public apology to Dr. Brower for an inaccurate statement in our previous communication,” the letter started. “We stated that Dr. Brower did not submit his intent to return form because we were working from the sheet dated Jan. 14, which was the deadline, and it did not contain his name. We are grateful to learn that Dr. Brower did submit his intent to return form on Jan. 19 when the time was extended due to technological issues encountered in submitting the forms.”

The letter concluded that Alexander and Brower spoke on Sunday evening, and Brower graciously accepted an apology for communicating the information inaccurately.

Many associated with Briarwood heard of the decision, which came as a shock to parents, students, teachers, school board members and others, during the week of Jan. 24.

It led to a petition at Change.org that was organized by the Briarwood student body. That petition now has 2,161 signatures.

“We can all agree that Dr. Brower has been a blessing on all of our lives,” the petition description read. “He consistently remains true to his values and grows with his student body. It is time to standup for someone who has stood up for us so many times. Dr. Brower genuinely cares about his students, which is something that cannot be taken for granted. As a student body we need to show our love and support for all the ways he has positively impacted our lives.”

In the Saturday afternoon notice to parents, the Transition Team said the decision was not made rashly or in a vacuum.

“Our staff charged with these responsibilities have prayerfully sought wise counsel and engagement from our board chairmen and others over an extended period of time,” read the letter.

According to many sources, including several at the rally on Sunday, the personnel actions were made with the BCS board members left in the dark, as church leadership handles personnel actions.

Amid the decision, Brower remains focused on finishing the 2021-2022 academic year strong as well as finishing out his final soccer season leading the Lions.

“It is my prayer and intent to continue serving BCS well for as long as I am able,” Brower said. “My only hope is that we all might be found faithful and that the advancement of His kingdom and our testimony before a watching world, and particularly our children, be so attractively winsome and radiant that they are drawn closer to Christ in a deeper and more personal manner. I am simply one individual that God has used among countless teachers, coaches, parents, youth workers, pastors, etc. to bring about the transformation in the hearts and lives of students.”