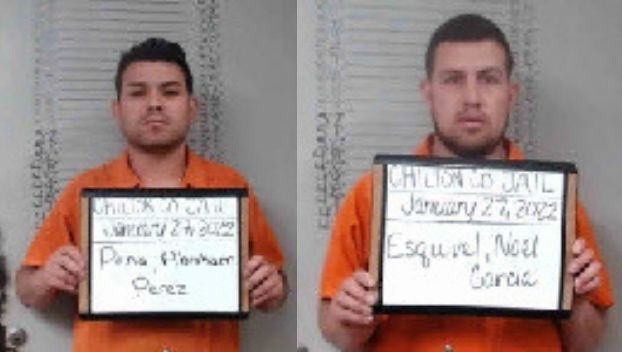 Two Shelby County men have been arrested and charged with murder for an incident that occurred during July 2021.

Noel Garcia Esquivel, 28, of Montevallo and Abraham Pena Perez, 27, of Alabaster were arrested on Thursday, Jan. 27 and each charged with three counts of murder.

The arrests followed months of investigating from the Chilton County Sheriff’s Office into the deaths of three men burned inside a car in a wooded area of the county on July 2, 2021.

After remains were sent to the Alabama Department of Forensic Sciences for examination, as well as other evidence and samples from families in Mexico, the three men were identified as 37-year-old Gilberto Munoz Cabrera, 24-year-old Gabriel Alonzo Rios Jr. and 36-year-old Javier Quintero Gonzalez.

All three victims were from the Nashville/Hendersonville area.

An autopsy performed by the ADFS determined that at least two of the victims suffered from gunshot wounds prior to being burned, leading to the case being investigated as a homicide.

Investigators from the Chilton County Sheiff’s Office Special Operations Division then traveled throughout multiple jurisdictions in Alabama and Tennessee to conduct interviews and gather evidence on the case.

That led to the arrest of Esquivel and Perez on Jan. 27. The CCSO issued search warrants and gathered evidence allegedly linking the two to the crime.

Both of the offenders were in the United States illegally, and investigators indicated the individuals were allegedly involved in drug trafficking.

Both are currently in the Chilton County Jail on bonds totaling $4.5 million each ($1.5 million for each count).