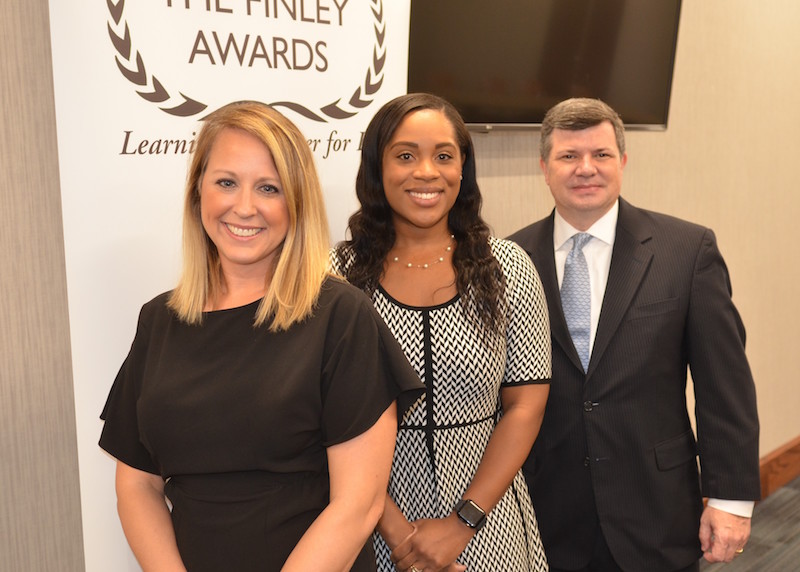 HOOVER – The Finley Committee recognized three Hoover City Schools teachers for going beyond the call of duty to serve students in the Hoover community and school district during a breakfast on Tuesday, Jan. 25 at the city’s Community Room.

Teachers in the Trenches awards honor educators whose dedication and kindness make an impact on students’ lives beyond the classroom.

The Finley Committee selected one teacher from elementary, middle and high school to receive the annual award.

A total of 54 teachers were nominated by their fellow teachers throughout the district.

From those nominations, the following teachers were selected by a group of educators to receive the recognition for 2022: Maryann Pledger, Ashley Sparks and Brian Wilson.

Sparks, a math specialist at Trace Crossings Elementary School, was described by her colleagues as selfless, thoughtful, fair and always assisting children who have an emotional, physical or academic need.

Wilson, who serves as Berry Middle School’s director of bands, was described as someone who prepares students musically to succeed at the next level.

Because of Wilson’s involvement with UAB, his students gain valuable music lessons to improve their skills and have the opportunity to participate in the UAB Band Camp with experienced college-level musicians.

“It’s just a huge honor to be mentioned and nominated for this,” Wilson said. “There are so many deserving teachers in our system, so to be recognized as a finalist for this was a high honor and to receive the award is just amazing. It’s great to be recognized for all the work that we put in with our students. I couldn’t be happier.”

Pledger is an English as a Second Language specialist at Spain Park High School.

During the Spring 2020 semester, when teachers and students were navigating the new world of online learning, Pledger realized some at-risk students were only eating once a day, so she donated food to them through her nonprofit organization.

“I was surprised and had no idea that my colleagues had nominated me and had seen the things that I had been doing,” Pledger said. “It’s an honor and I’m humbled to have my name associated with such a high character as Mr. Finley. With the caliber of teachers who come before me who have also been named, it’s nice to know that my name is now attached with their names.”

“It has taken great individuals like you, and I applaud you and thank each of you for serving our schools,” Brocato said. “I’m so grateful we have the type of people that are so dedicated to the city of Hoover like you.”

Hoover City Schools Superintendent Dr. Dee Fowler reflected on the life and legacy of the late Coach Bob Finley as he congratulated the three award recipients.

“I wish I could have known Coach Finley,” Fowler said. “To know a person of that character was in this district means a lot, and I know to you three teachers it means a lot to have your name associated with this man of great character. To have this gentleman that we can look back on and use as a measuring stick means so much. It’s such a special honor.”