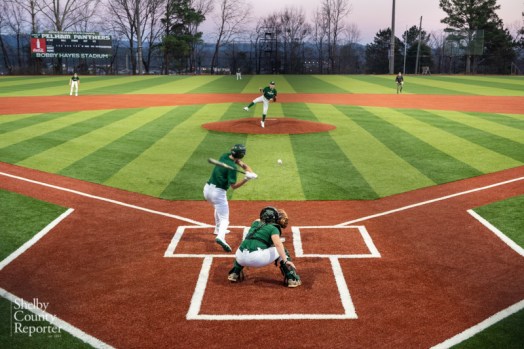 The Pelham baseball team will take the field this spring on a new turf playing surface after overhauling the field during the offseason, which will also serve as a new practice field for the band. (Reporter photo/Keith McCoy) 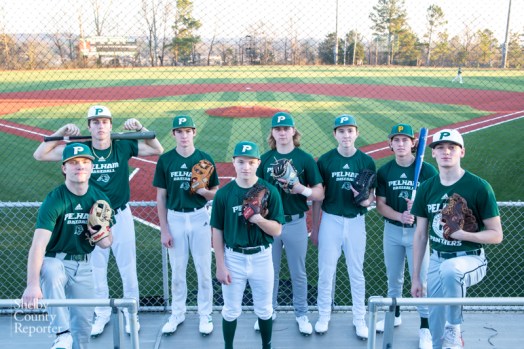 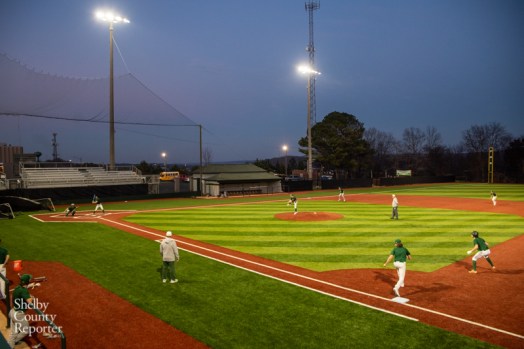 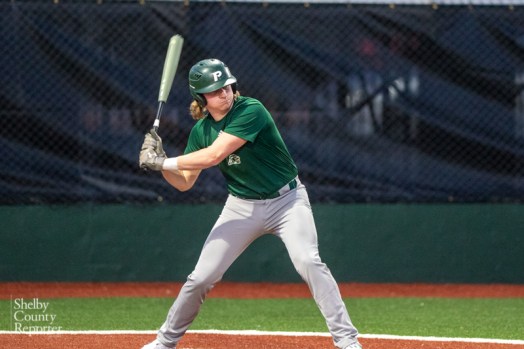 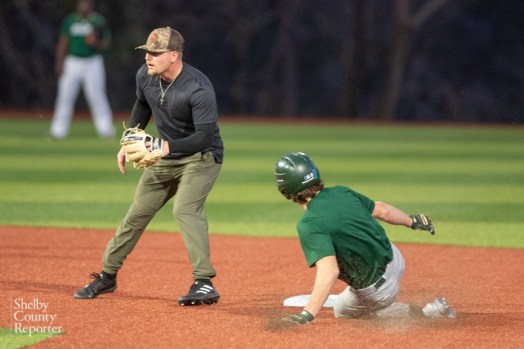 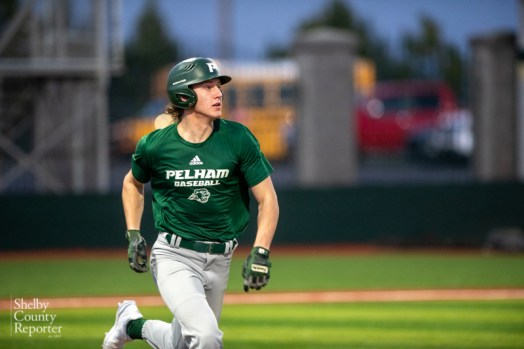 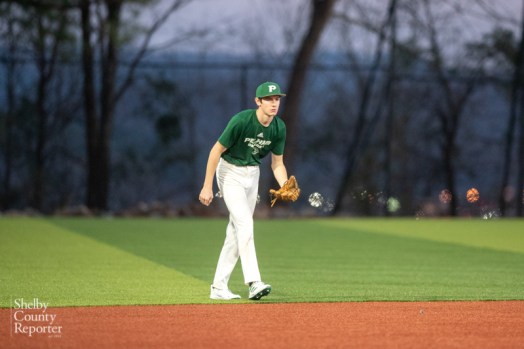 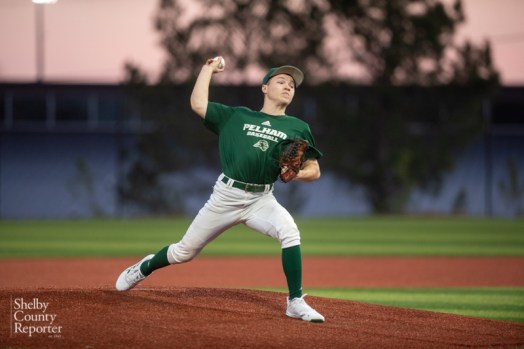 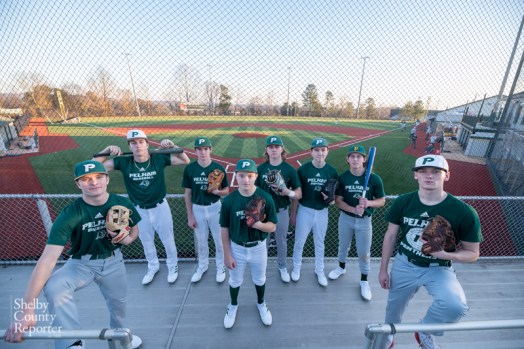 “Are you measuring for turf?” Anderson ask with a laugh breaking up his words not knowing he had cracked the code.

Next thing Anderson knew, Coefield and the school system were having conversations about making it happen.

“Turf really hadn’t been on my mind,” Anderson said. “As old as I am, I always said, ‘Turf, we’re not getting turf.’ But I knew there was a plan in place to get the band out of the parking lot. We started talking about the way others had done it by alternating colors of turf every 5 yards. We had a meeting about it, Dr. Coefield went to the board and off we went.”

Now, the Panthers are set to take the field for the 2022 baseball season this spring on the new playing surface, which features no dirt or grass, as well as under new LED lights that can flash for entertainment effect.

The turf, which is the same that Vanderbilt University has on its baseball field, will benefit more than just the baseball team with the Pelham High School Marching Band now getting a facility to call home as well.

“We were looking at how we could improve,” Coefield said.  “We’re always looking at that. We had an issue with the band practicing in the parking lot, so we started looking at how to solve that issue. Moving them onto the baseball field was an option, but we started looking at wear and tear that would cause and the maintenance to keep it up. We had some conversations and eventually came to the solution that if we turf the baseball field, it puts the band kids on better surface.”

Coefield said from the start it was that it was a team effort from Anderson, Pelham High School Band Director Justin Ward, Pelham Principal and Athletic Director Kim Kiel and the school board.

“We said from the first conversation that this doesn’t make sense for us unless we get multiple uses out of it,” Coefield said. “All of us went together to look at multiple places together. It was really about us coming together and figuring out that we could do this and work it out.”

Coefield said that it was already one of the premier field, but now it has expanded its use and maximized potential, adding that it is as nice as any field around, which has created buzz for those who will get to use it.

“I just think it kind of separates us from some other areas in a way that it shows the importance of having great facilities for our students and athletes to participate on,” Kiel said. “We are very fortunate to have a board that has supported us through this process. It is great for our school and will improve our school system to hopefully encourage even more families want to move in to be here with us.”

One of the biggest benefits for Anderson and the baseball team is the maintenance.

Now, instead of having to roll the tarp out every time there is even a threat of rain, they will be able to leave the surface uncovered and spend more time focusing on preparation for the sport.

“One of our players had come back to visit, and we were talking about the turf,” Anderson said. “He said, ‘You know what, the worst thing in baseball is tarp pulls.’ Not having to worry about that constantly… do we put the tarp out, not put the tarp out? That’s going to be big for us.”

Anderson said that before, it took the final 30-45 minutes of practice before leaving the field for the day to get the tarp out or the field prepared.

Now, that won’t be an issue.

The field will always be lined and ready, while the tarp won’t have to be out.

“Now, it’s take the garbage out, meet and go home,” he said.

Anderson said he’s also excited that he and others don’t have to worry about cutting the grass when it’s 30 degrees or any other maintenance.

“It took so much time and effort to maintain the field that we can now use to focus on baseball,” he said.

Perhaps more excited than the head coach was the players, who were ecstatic when they found out.

“As soon as I told them we were getting it, they were really excited,” Anderson said. “That and the new LED lights, we’ll have to play some good baseball this year. Our kids were working the bullpen for the American Legion tournament last summer, and they went absolutely nuts when they saw the lights flashing.”

But when baseball season ends and it shifts to summer, the field will become useable by the band, which gives them a major upgrade from the parking lot they are currently using.

“In the 11 years I’ve been here, we have always practiced in the parking lot,” Ward said. “To my knowledge they always have. There are some benefits to practicing on concrete, but there are challenges like cars being parked in the middle of it and the summer heat.”

Now, instead of practicing on the black asphalt in 90- to 100-degree heat, they’ll be able to use the turf, adding removable chalk to a field already featuring 5-yard increments.

“I am just so grateful that our school district was able to do something that will give our baseball team one of the bet facilities in the state, but also a facility for us during the summer and the fall,” Ward said. “It’s a huge aspect from a safety issue and the impact it has on students. It will be cooler and more secure. I cannot begin to applaud our superintendent, our school board and coach Kiel enough. They were able to boost two programs at one time by being creative and building that partnership. It’s an incredible sign for what happens here in Pelham City Schools.”

Ward said it will help the band program significantly from a preparation standpoint, not only because of the space with no cars driving through or in the way, but because most fields they perform on now are turf.

Combined with the turf, the new LED lights and a new observation tower, Ward said they can continue to build one of the best bands in the state.

He also emphasized the effort of Kiel and Coefield during a difficult time.

“She is always of the mindset of ‘how we can help programs and help students?’” Ward said. “It’s incredible considering everything administrators are dealing with right now. It would be really easy to say, ‘You know what, we need to hit the pause button on everything.’ But she continues to do what’s best to make our school the best around. We have one of the best band programs in this state, and that is a direct correlation of the investment she continues to make, Dr. Coefield and our entire school board. They do everything they can to make it the best possible experience by giving us the tools to be successful.”

Pelham will host a special ceremony on Tuesday, Feb. 22 before the Panthers take on Spain Park at 6:30 p.m. with a special first pitch from Coefield.

“To me, what makes me so proud is that we are not losing sight of what we can do for our kids,” Kiel said. “Not just athletics and extracurricular, it’s in academic programs as well. The vision our board and superintendent have had continue to find ways to build our kids.”