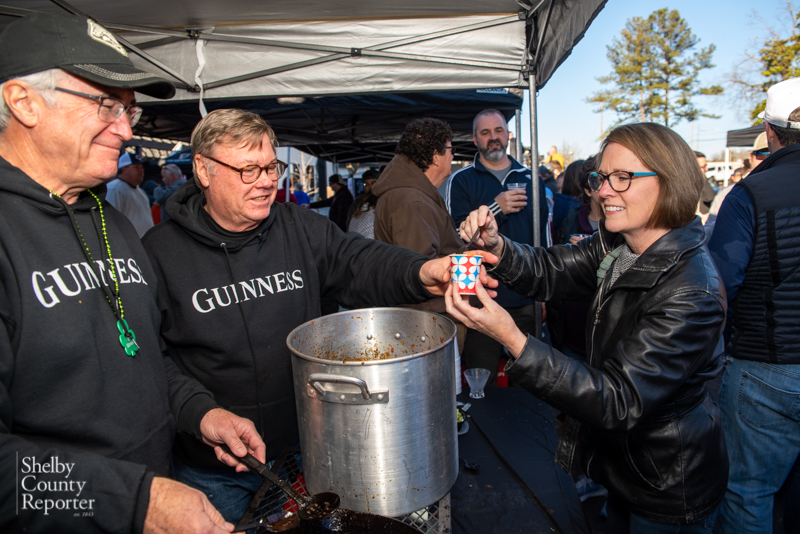 Pelham’s Beer Hog hosted the sixth annual Guinness sponsored chili cook-off on Saturday, Jan. 29. Contestants brought all of their ingredients from home and made their own personal chili recipe that incorporated Guinness beer into the dish. The cook-off benefited local nonprofit Wings of Hope Pediatric Foundation. (Reporter Photo/Keith McCoy)

PELHAM – The weather on Saturday, Jan. 29 was perfect for the annual Guinness Chili Cook-off, which took place this year at Beer Hog in Pelham. The air was cool but the sun was shining, and Shelby County residents came out in droves to try multiple chili recipes.

“We’ve had some challenges in the past with weather, but days like today are perfect for a chili cook-off,” said Ian Willicott, the district sales manager for Alabama Crown Distributing Company.

The event is sponsored by Guinness Beer and serves as a way to highlight the drink’s diversity. This marked the cook-off’s sixth year, and this year the proceeds from the event benefited local nonprofit Wings of Hope Pediatric Foundation.

“We wanted to be able to tie in a local nonprofit and have them benefit from it,” Willicott said. “So, it’s really been this joint effort of Guinness, Alabama Crown, Wings of Hope and Beer Hog.”

The Wings of Hope Pediatric Foundation provides families with different types of support such as meals, house cleaning, lawn care and (when necessary) financial assistance with paying bills.

Willicott said the goal of the cook-off was to create an event that was “grass roots” and that incorporated everything local to represent the area.  The cook-off has grown in popularity over the years, and Willicott said that popularity has to do with two things people love: chili and Guinness.

“Guinness is a world-renowned brand and also a brand that’s very common to use in the culinary world,” he said. “A lot of people use Guinness for marinating, Bloody Mary’s, a lot of baked goods – when it comes to a cook-off, there really isn’t a better beer brand to use than Guinness.”

The cook-off consisted of eight to 10 contestants who all brought their A-game chili recipes to the competition. Contestants had to follow a specific set of rules when competing, including having to incorporate 32 ounces of Guinness in their recipe.

Every contestant placed their own spin on the dish to stand out from the crowd. One of the contestants was Fultondale Fire Chief Justin Mackenzie, who has competed in other cooking competitions including an appearance on Food Network’s “Guy’s Grocery Games.” Mackenzie said he chose to represent a more classic style of chili.

“We just wanted to do a classic, simple recipe,” Mackenzie said. “Not too fancy. Something I would eat myself any day of the week.”

“We are doing chili on a pizza,” Allen said. “We wanted to do something people would enjoy that had [the students] thinking outside the box.”

The competition was all friendly, of course, and all day Pelham residents and chefs enjoyed the comforts of sharing food with the community.

“We love to do this,” Mackenzie said. “I mean, it’s bringing people together with good food and helping a good cause. You can’t beat that.”

To see more pictures from the Guinness chili cook-off, visit the SCR photo website at Shelbycountyphotos.com/Events-and-Happenings/2022-01-29-Beer-Hog-chili-cook-off/.