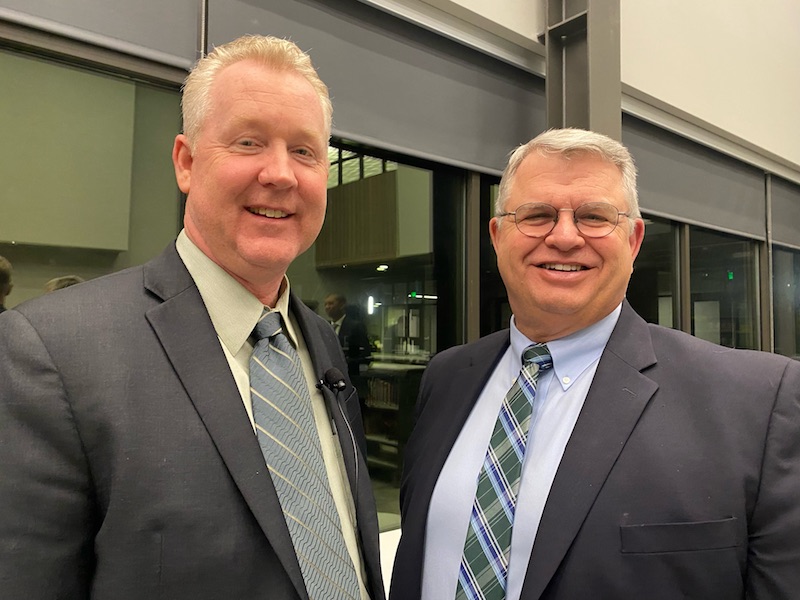 The Pelham Board of Education officially approved Dr. Chuck Ledbetter’s contract for the position of superintendent. Ledbetter will be taking over the role from Dr. Scott Coefield (left) at the end of the 2021-2022 school year. (Reporter Photo/Michelle Love)

PELHAM – The Pelham Board of Education approved the new superintendent contract for Dr. Chuck Ledbetter at its meeting on Monday night, Jan. 31.

Pelham BOE attorney Steve Stine explained the contract is “very consistent” with other superintendent contracts in the area with the high spots being it is a minimum three-year contract and Ledbetter’s salary would be $217,500.

The contract was approved by the Board unanimously, and the Board warmly welcomed Ledbetter to the Pelham family.

“I just want to welcome you and thank you for being here,” said Board Vice President Angie Hester. “I believe the Lord puts people where they need to be and I believe he has brought you here to us.”

Board President Rick Rhoades said while they are sad about Coefield’s departure, they are excited for the future under Ledbetter’s hand.

“The plans we have in place with Dr. Coefield will make this as smooth a transition as possible,” Rhoades said. “Dr. Ledbetter brings an awful lot to the table, and the thing that struck me the most is he really wants to come to Pelham, and I think that’s where it all starts.”

On Thursday, Jan. 6, Pelham City Schools announced Ledbetter would be taking over the role of the school system’s superintendent.

In October 2021, Coefield announced his plans to retire at the end of the 2021-2022 school year.  Coefield will continue in his role through May 2022, and he and Ledbetter will work together in the transition of roles once the contract negotiations are finalized.