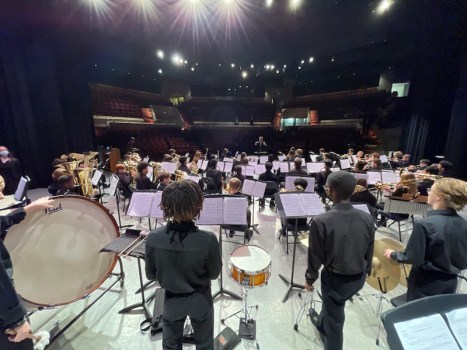 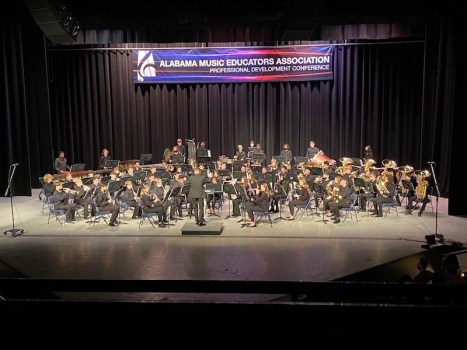 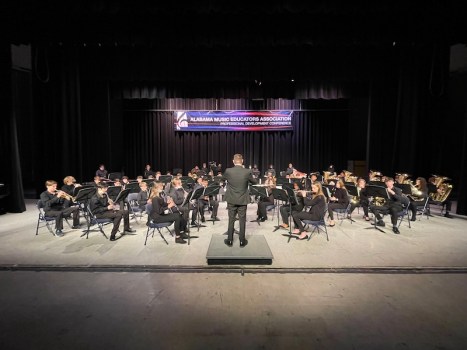 BIRMINGHAM – The Thompson Middle School Symphonic Band performed for educators from across the state at the Alabama Music Educators Association (AMEA) Professional Development Conference at the BJCC on Thursday, Jan. 20.

“We wanted to do something to honor our school system and all the great things that we’ve accomplished since we’ve become Alabaster City Schools, so it was really special for us to get to do that,” said Thompson Middle School Director of Bands Michael Chambless. “This is for music educators across the state of Alabama. This particular year, we were the only middle school band that was selected to play at the conference.”

In May 2021, the band submitted two recordings to the AMEA Board for consideration, and in July they were notified of their selection to perform. In addition to “Champions of Our Future,” the other four selections performed were “Air and Jig” arranged by Chris Bernotas, “Ye Banks and Braes O’ Bonnie Doon” by Michael Sweeney, “Bunker Hill” by James Swearingen and “Ancient Fires” by Carol Brittin Chambers.

The 65-member band also performed a preview concert via Zoom on Jan. 18 from the TMS auditorium.

Chambless said he was proud of how the students connected to the music and gave a meaningful performance, despite having to fight through adversity.

“I just want to thank our school board, Dr. Vickers and Dr. Woodley for their support in making this happen,” he said. “We have an incredible school system, and something like this doesn’t happen without incredible support from them. I want to thank the parents for supporting their students in their musical journey this school year. They’ve worked incredibly hard for this. They’ve made a lot of progress this school year, and we’re just really proud of how hard they’ve worked and how they represented the community last week at our performance.”