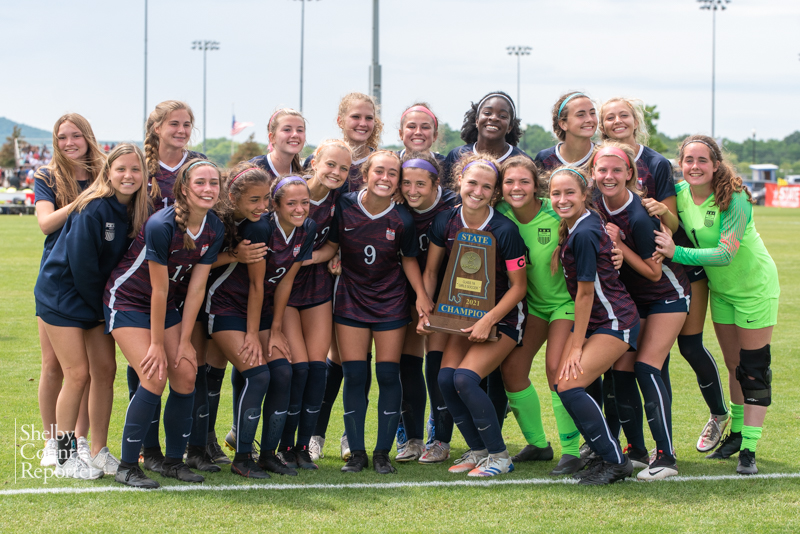 Oak Mountain is one of three local teams that will enter the 2022 season No. 1 off a state championship, while 18 total are ranked in the preseason poll. (File)

Consistently, the best sport in Shelby County tends to be soccer, and that was no more evident than in the first rankings of the 2022 season.

With the preseason coaches poll released, 18 teams from the county were ranked inside their respective classification’s standings, while three of those 18 found the top spot.

The three to do so are also the three entering the 2022 season as defending state champions, two in the 7A classification and one in the 4A-5A classification.

In Class 7A, Spain Park’s boys and Oak Mountain’s girls will both enter the season on top after claiming championships last year.

The Jags will have several new faces on this year’s team hoping to replicate the success of last year’s 19-1-3 season. But the expectation is still extremely high for head coach Matt Hall and his team.

Oak Mountain is in a different situation, as the Eagles will be one of the most experienced teams in the state.

Fresh off of last year’s 22-3-1 season, that has head coach Chris Blight’s squad confident and working even harder heading into the new season.

It will be similar for Indian Springs’ boys as the top team in the 4A-5A classification.

Last season, Springs was one of the state’s most dominant teams, going 24-2-1 despite a difficult en route to the title.

This year, they’ll return the majority of their team, including the state’s Gatorade Player of the Year Jackson Nabors. They won’t have as much depth, but if they stay healthy, they’ll be one of the top teams again.

Outside of those three, 15 others earned a spot in their respective standings, including 14 inside the top 10.

In the 7A standings, every team found a spot inside the top 10.

Oak Mountain’s boys joined the girls by coming in at No. 6 in the rankings, while the Spain Park girls were also at No. 6.

Both Thompson teams will also start the year in the top 10 with the boys at No. 7 under first-year head coach Jon Kresena, while the girls came in at No. 8 and will look to continue a historic pace under Dan DeMasters.

Briarwood, Chelsea, Helena and Pelham all had their boys and girls earn a spot in the Class 6A top 10.

The Pelham girls, who put together a historic season last year, also continue to get respect as the No. 6 team in the preseason standings.

Briarwood’s boys and girls both earned spots in the top 10 as well with the boys earning the No. 8 spot and the girls finding the No. 9 position.

Chelsea’s boys claimed the No. 9 spot, while Helena’s boys and girls earned recognition as well.

The Huskies’ boys will start the season No. 10, while the girls will start outside of the top 10 at No. 16.

In the 4A-5A standings, Indian Springs’ girls also found a spot in the top 10 with the girls earning the No. 6 ranking.

Beyond that, Westminster at Oak Mountain’s boys and girls were both ranked as well with the boys coming in at No. 6 and the girls at No. 7.