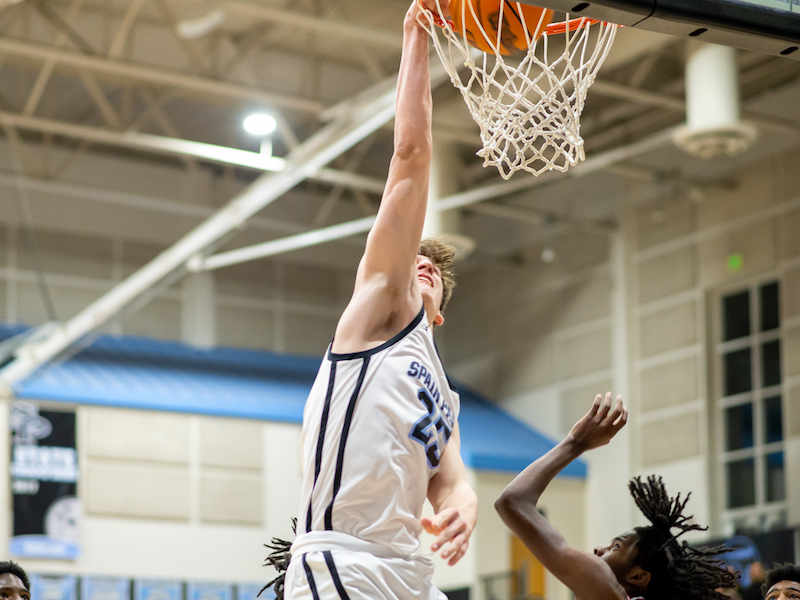 Spain Park took down a top-three team for the second Friday in a row on Feb. 4 to end the regular season with a win against rival and No. 3 Hoover. (Contributed)

HOOVER – For the second Friday in a row, the Spain Park Jaguars took down a top-three team in the 7A classification, and this time it came against their crosstown rival in the final regular season game of the year.

After taking down No. 2 Vestavia Hills last week, leading the entire game and eventually winning 73-71 in overtime, the sixth-ranked Jags got No. 3 Hoover to close out the regular season.

And much like the week before, Spain Park led from the start and outlasted the Bucs 63-57 in front of one of the season’s largest student sections, which rushed the floor as soon as the final buzzer sounded.

The Jags looked motivated from the tip of the game, jumping out to a 6-0 lead in a low-scoring first 3:30 of the opening quarter.

That eventually led to a 16-6 lead at the end of the first for Spain Park, which gave the Jaguars some cushion to work with.

Hoover, however, found a rhythm in the second quarter and made a push.

The Bucs put together an 18-point quarter, overcoming a slow start to the matchup, but the Jags continued a consistent first half on the offensive end of the floor with 14 points to maintain their lead at 30-24 going into the half.

The game, however, didn’t seem to truly start until the second half when both came out firing on all cylinders in the third quarter.

The two teams went blow for blow on the offensive end, trading hard-fought baskets, which led to a thrilling back-and-forth battle.

They combined for 39 points, as the Bucs continued an impressive stretch shooting the ball with 20 points, while the Jags put together their best offensive quarter of the game with 19 points.

With that, Spain Park still maintained a five-point edge at 49-44 going into the final quarter.

Hoover had been slowly clawing back in the game, and that continued in the final quarter as the Bucs made their strongest push yet.

They outscored Spain park 8-5 in the first four minutes of the quarter to draw to within two points at 54-52 with 3:38 to play.

Scoring was at a premium over the next two points, as each team traded big baskets, leading to a 58-55 lead for Spain Park with less than two minutes remaining.

From there, however, it was more one sided, as the Jaguars did what they needed to over the final 1:30 to close out the six-point win. They outscored Hoover 5-2 in that span, as the uphill climb from the start became too much for the Bucs.

Spain Park got 13 each from Colin Turner and Zach Gray in the win, while Sam Wright finished with nine and Chase James had six. A total of nine players scored in the winning effort for the Jags, who will now get set for a matchup with Gadsden City on Feb. 9 at Vestavia Hills in the opening round of the area tournament to determine if they’ll advance to the Sweet 16.